The end of the year also means beauty clearance sales.... so I broke my Project 10 Pan and bought some goodies.... But I got a great deal so I have no regrets at all :) 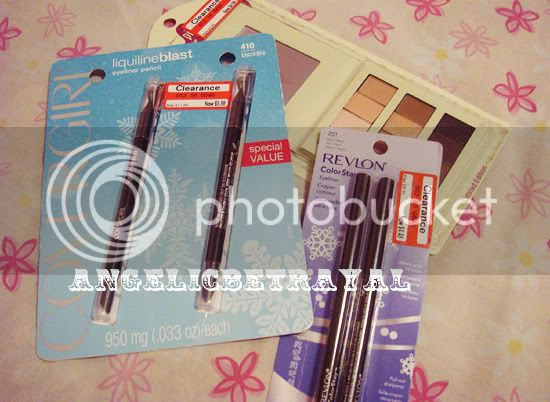 I was strolling around because my friend wanted to buy some makeup remover when I saw a display in the beauty aisle with "Clearance" written all over it. There were a lot of E.L.F $5 palettes and a bunch of other holiday themed makeup sets. I picked up a Pixi palette because I've never tried anything from them before and the palette features 12 neutral shades which will be great for traveling. I also snagged up the last of two holiday bundle eyeliner sets from Covergirl and Revlon. I have the Revlon Colorstay Eyeliner in black already and I like it so I thought I'd buy some backups when they were on sale. I've been wanting to try the Covergirl Liquiline Blasts for some time so this was a great opportunity. All of these were half off their original price. In all, I paid less than $16 for four eyeliners and an eyeshadow palette before tax. It may seem like a lot but to put it in , a single Urban Decay 24/7 eyeliner already costs $17. I will be doing a review on the Pixi palette sometime next week probably and the eyeliners have been added to my backup stash :) 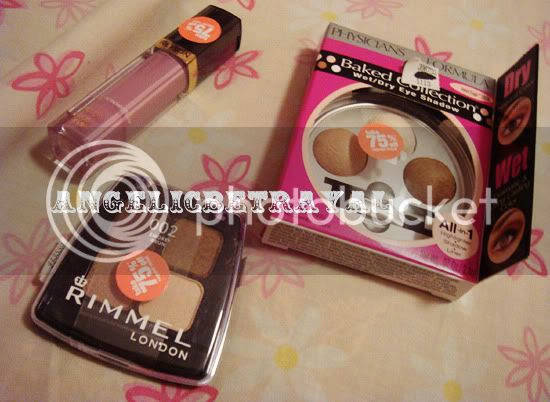 As you may or may not know, CVS is putting 50% - 75% off stickers on a large variety of beauty products for it's semi-annual beauty clearance. I HAD to rush over there after hearing about some really great deals. I picked up Revlon's Super Lustrous Lipgloss in Lilac Petal, Physician's Formula's Wet/Dry Eyeshadow in Baked Sugar, and Rimmel's quad in Smokey Brun. These all had 75% off stickers on them and I used a $1 off Rimmel coupon which I had been saving, bringing my total down to $5.31 before tax! I saved more than $20!

I originally did not think I wold like Lilac Petal since it is a purple shade but it actually looks more like a pale nude pink on my lips which I love. The shadows are also really great. I will be doing reviews and swatches in a later post! I may go back to CVS in a few days to see what is left of the sale because some of the displays did not seem to be labeled yet. There were no stickers on some Loreal items, none on Maybelline or Covergirl. So I might have more to show you guys in a few days :)

What better way to start off the New Year than with new makeup? Haha, I joke.... =X