During a normal school week I tend to eat simply (and frugally) mostly due to lack of time and energy to find a decent place to eat. So when I'm on a break I like to try out new places around town that I've heard of through bloggers, The Food Network, and the like. The past week I went to a few interesting eateries with my boyfriend so if you're ever in the area, you can try them out for yourself! 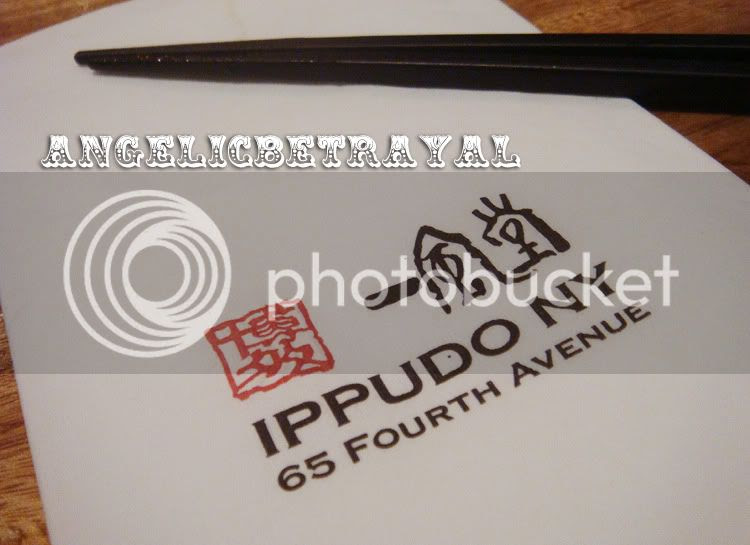 After reading the beautiful Winnie's blog post on Ippudo's amazing ramen I had to try it for myself. Apparently it is quite a popular place as we had to wait for about fifteen minutes for a seat during lunch time. The staff were very friendly and energetic; every time a customer walked into the dining area to be seated, all the waiters and chefs would yell "welcome!" in Japanese. 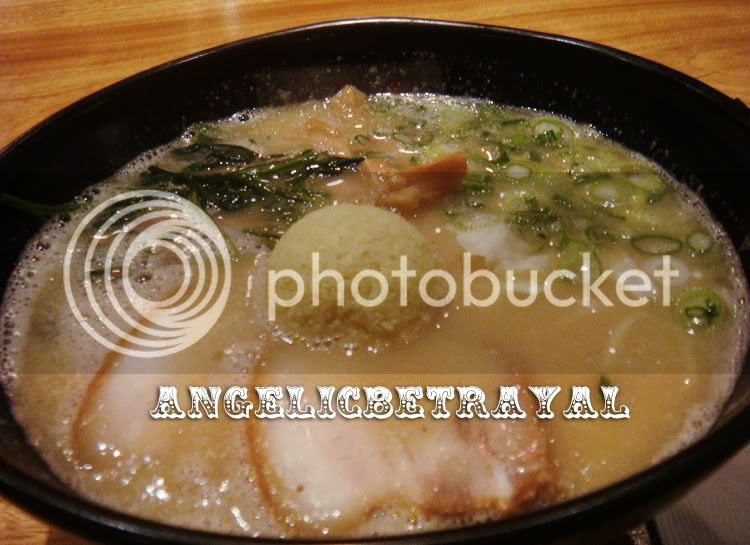 I ordered the Miso ramen which the menu describes as "Soy bean paste flavored noodle in "Tonkotsu" based soup with pork chashu, cabbage, spinach, menma, ginger, and scallions". The noodles were not as thick as I usually like but the bowl was still very satisfyingly good. The amount of toppings was on point and I was happy to finish the entire bowl. The portions are just right for me as well. 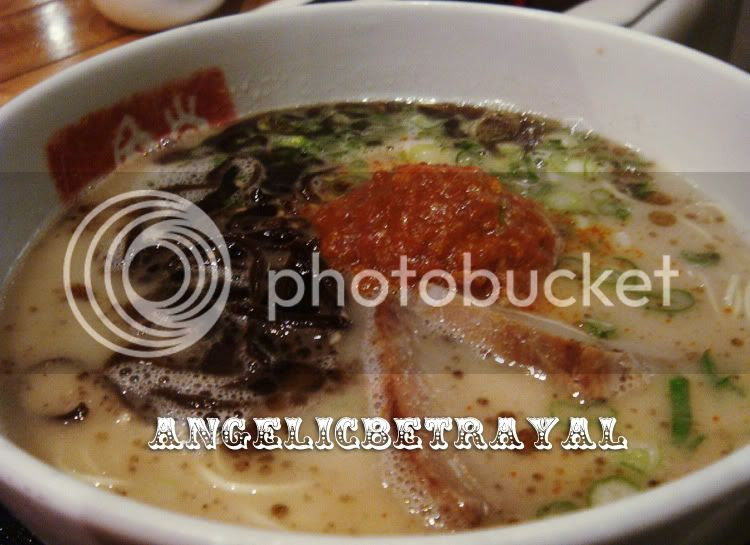 My boyfriend ordered the Karaka ramen, described as " "Tonkotsu" noodle soup with Ippudo's special blend of hot spices, topped with pork chashu, kikurage, cabbage, onion, minced pork, and scallions". The noodles in his ramen were thinner and he preferred my noodles but enjoyed his soup better since he likes spicy food. I tasted some of this and it was good but I don't tend to eat spicy food so I preferred mine :) 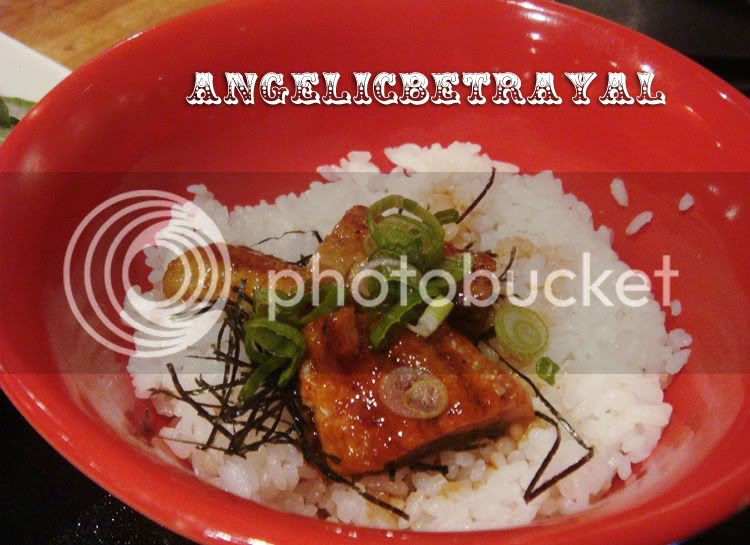 For an extra $3 you get a rice bowl with a choice of topping and a small salad. To be honest, I am not sure if the extra $3 is worth it because the amount of rice you get is extremely small. The eel was yummy and the salad was pretty unique. I detected a bit of wasabi mixed into the salad dressing. If you are really hungry, I suggest you get the Kae-dama which is an extra portion of noodles for only $2. 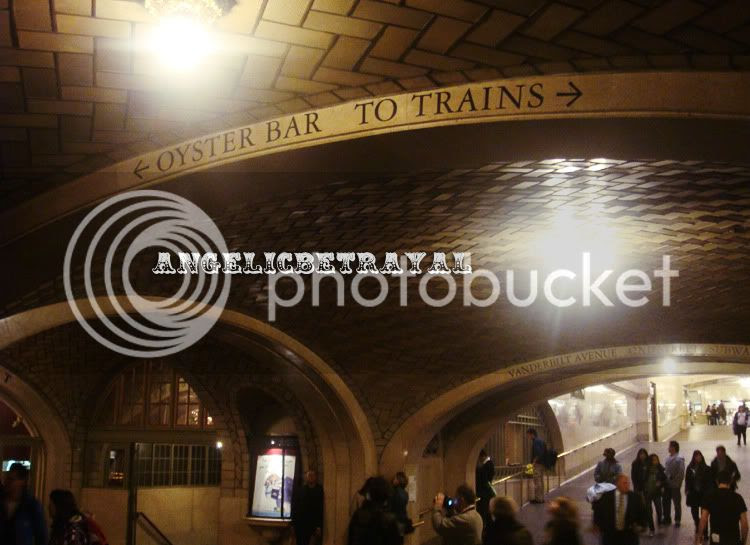 After a pleasant experience at Ippudo, we went to Grand Central to walk about and digest our ramen. I really love the architecture of Grand Central and in general, I think train stations have a romantic aura about them. There is a lot to do there actually because there are quite a number of shops (Mac, Origins, L'Occitane, Aveda, Pylones) and many places to eat. 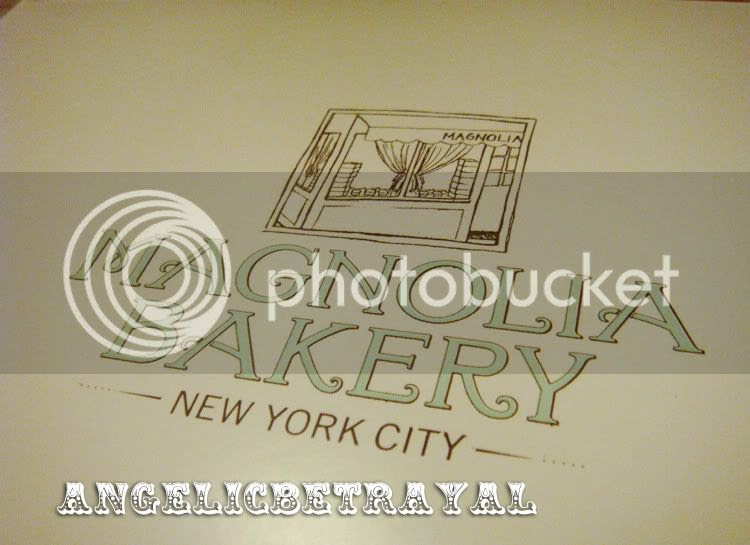 The main reason we went to Grand Central was because I had heard a lot about Magnolia cupcakes and I was very excited to try the little monsters myself. 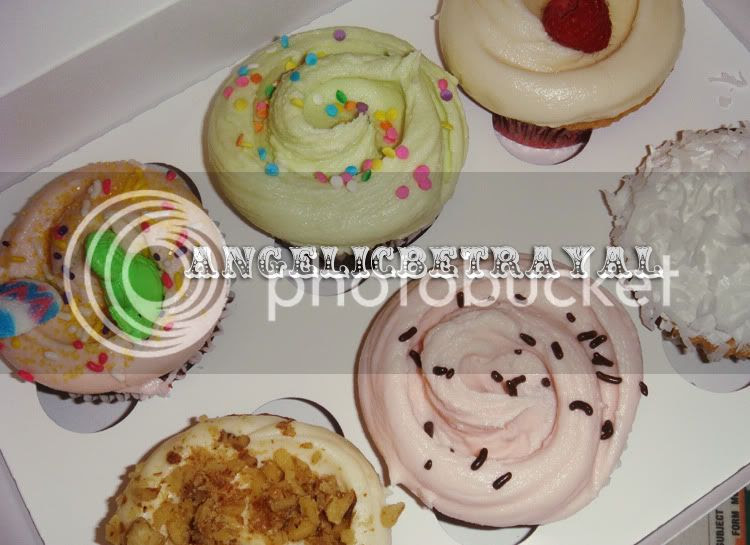 I picked the cupcakes randomly and ended up with the Easter cupcake, Japan Cupcake (top row, far right) whose proceeds to go Japanese Earthquake/Hurricane relief, Carrot Cake Cupcake, Coconut Lemon Cupcake, and two Chocolate with Vanilla(?) Frosting Cupcakes (center). The Japan Cupcake was my favorite as the cake was just sweet enough and the icing was not too sweet. To be honest, I did not like any of the other cupcakes very much at all. They were all average and I was disappointed with the consistency of all the cupcakes. They were super crumbly and were a hot mess to eat. The icing on the chocolate cupcakes was too sweet and there was too much of it. Perhaps my biggest gripe about these sub-par cupcakes are that these do not come cheap at more than $3 a piece! I was extremely disappointed and will not be repurchasing anymore of these overpriced sweets ever again. However, these seem to have a cult following so you may like them. If you do, please tell me how the quality of these cupcakes justifies the $3 price because I can't figure it out. 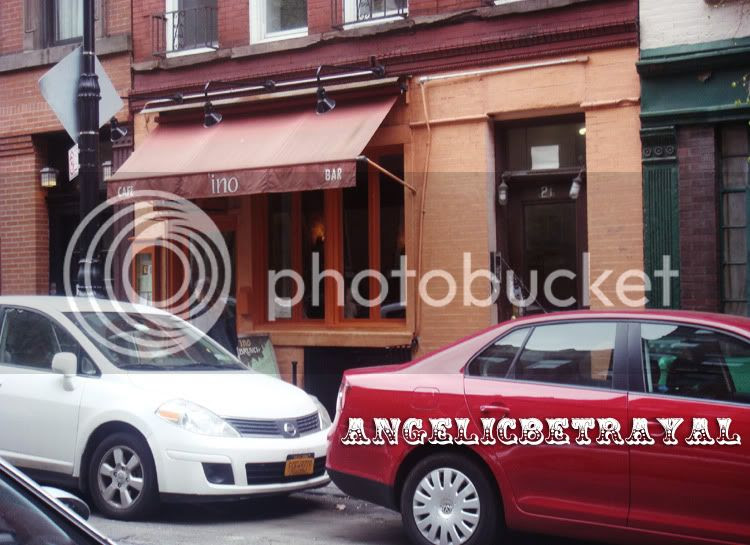 On another beautiful spring day, we found our way to the tiny eatery called Ino. I first heard about this place on a Battali show on The Food Network. I love my carbs and my boyfriend suggested we eat Italian food so I thought this was the perfect place. This resturant is quaint and tiny; so tiny that I do not recommend a party of more than three to eat there. The restaurant has a whopping eight tables for two and a small bar area. There is very little room to walk and the tables must be moved for people to go in and out of their seats (you'll know what I mean when you go there). This place is perfect for an intimate date and I hear they boast an extensive wine list (I can't drink so I cannot attest to that claim). 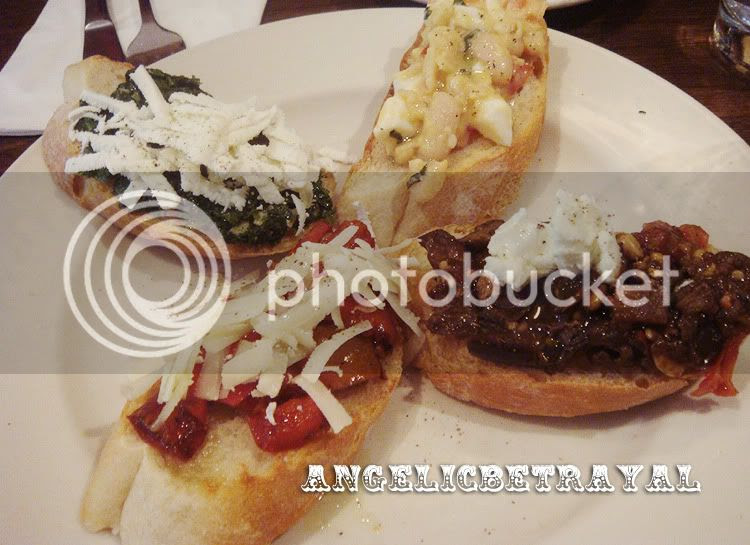 We started off our lunch with four of the bruschettas: (from top left clockwise) (1) ricotta salata with wilted greens, (2) white bean, tomato, and basil, (3) caponata and goat cheese, (4) pepperonata and crotonese. My favorite was the pepperonata which was sweet and not spicy at all. My boyfriend liked the white bean the best. The ricotta salata had lots of garlic in it and was a bit too much but if there was less topping, it would have been equally as scrumptious on the bread. The bread was amazingly good, crunchy but not hard. 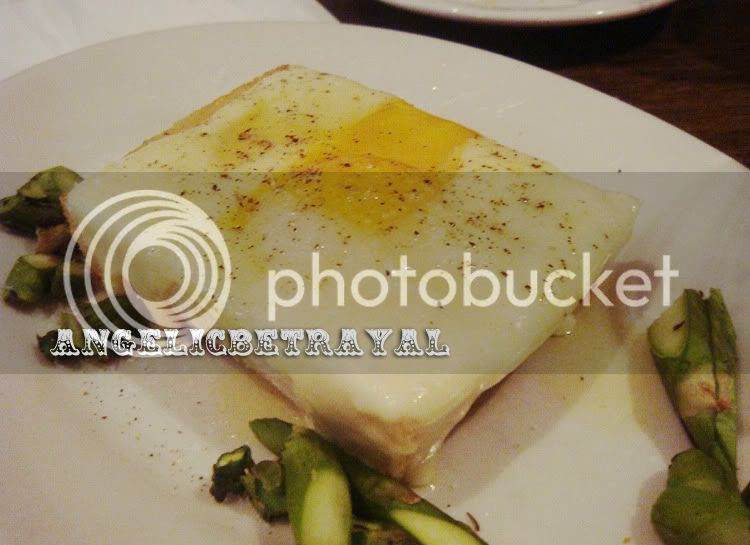 Of course, I had to order the infamous Truffled Egg Toast, one of Ino's signature dishes. You can smell the unique truffle oil before this even arrives at your table (but then again, the resturant is so small you can easily detect the lovely aromas of your neighbor's food). This dish consists of a piece of lightly toasted crispy bread with a indent for a soft boiled egg to rest in. The top edges of the bread are topped generously with fontina cheese which melts into a gooey, scrumptious mess. My boyfriend and I cut the toast in the middle so we could each try some. The dish was a perfect meld of crispy bread meets runny egg meets savory cheese. However, we both would have enjoyed this better without the truffle oil which was a bit overwhelming. Perhaps more refined palates would enjoy the truffle oil more but it added an unnecessary taste to the otherwise quite perfect egg toast. 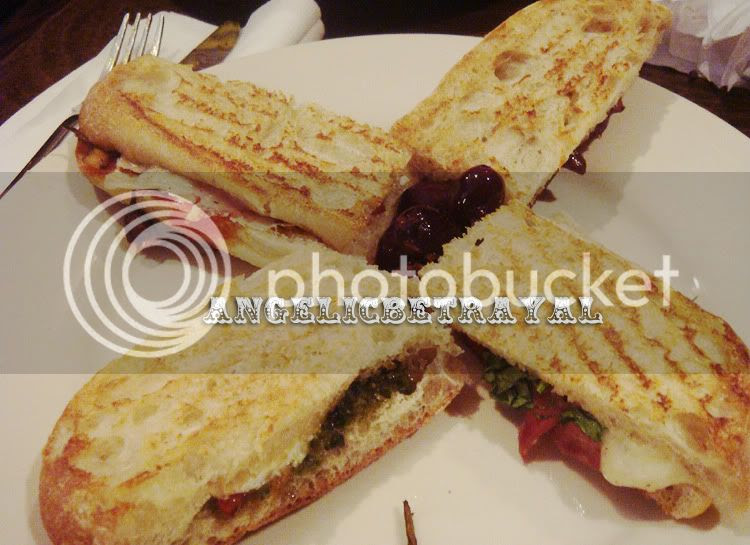 For our main entree, each of us ordered a quattro panini which is basically a sampler of sorts of four paninis on their menu of your choosing. Each piece is a quarter of a panini so in the end you are still getting the same amount if you had ordered one of the others. A regular panini is $11 while the quattro is $12 which is quite reasonable if you ask me. This is a picture of my quattro and I did not bother taking a picture of my boyfriend's because it is quite impossible to see the fillings. I believe my favorite was the mozzarella, basil pesto and pepperonata panini (bottom left). But we got eight different mini paninis so it is a bit hard to recall exactly what we ordered. Once again, the bread was the most delicious part and the fillings were just a bonus. I had thought that the servings would be extremely small and I had even warned my boyfriend to eat a bigger breakfast in case. But we left the resturant entirely stuffed and in hindsight, we probably should have only ordered one quattro to share. I guess I was being a bit too greedy in wanting to try out more toppings! Nonetheless, I recommend this place for a quick bite with one or two other people because the prices are reasonable and the food is perfect for breakfast, lunch, and dinner.

With our budgets, my boyfriend and I can't be spending a fortune on eating out so sometimes we will attempt to cook something at home. We both rarely cook and usually end up making pasta for lunch. But I was getting sick of pasta and I wanted to try something new yet easy. We settled for quesadillas! 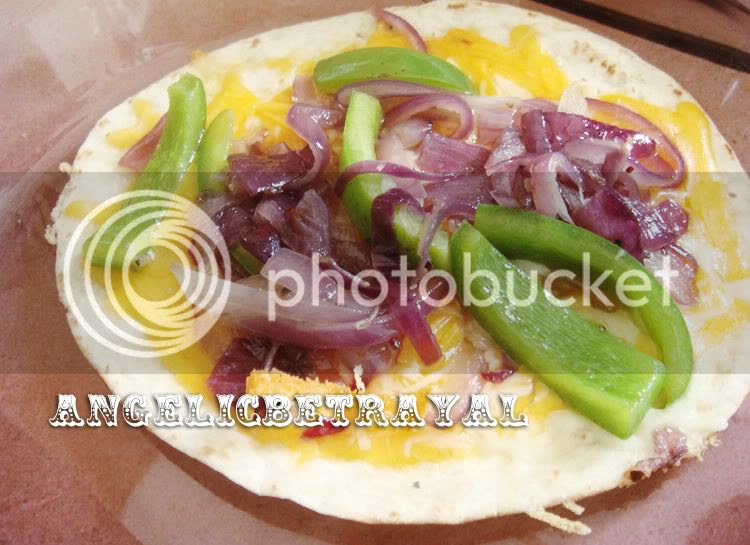 We used monterey jack and sharp cheddar cheese as well as red onion and green peppers. My boyfriend wanted to just use cheese but I wanted to make it somewhat healthier so I threw in some veggies. We sautéed the red onions and green peppers in some canola oil until the onions were sweet and seasoned with salt and pepper. We then heated up the tortillas in the same pan, added the cheese, then a portion of the veggies. It turned out really well and the onions and peppers added a lot of flavor to the otherwise bland quesadilla.


So, those are a few of my food highlights for the past week! Where are your favorite places to eat? Do you like these food posts or should I just stick to beauty talk? Tell me in the comments! :)


Labels: about me food