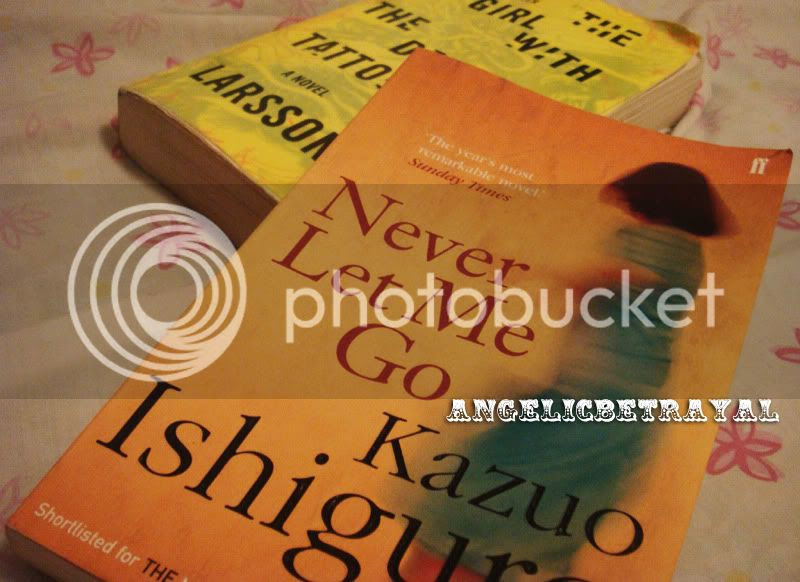 With all the free time I have on my hands since school ended, I decided to tackle some popular books on my reading wish list. The $15 price for a single book at Barnes & Nobles had me running for the library hence the somewhat tattered look.
I first heard of when I saw the trailer for the movie months before it came out. I was extremely excited for its release because I adore the three main leads: Carey Mulligan, Kiera Knightley, and Andrew Garfield. I got my hands on the movie before the novel and for the most part I found out the plot mostly from the trailer so nothing really surprised me. If anything, the film brought out my anger and frustration at the characters and plot. The actors performed well but their characters are portrayed in a less nuanced version of themselves than in the novel. On several occasions while reading the novel by Kazuo Ishiguro I broke out into tears. The narrative is breathtakingly surreal and you come to understand the fictional world even though it seems impossible. Despite the eventual disappointment, you feel a sense of closure, something the film lacks. I highly recommend the novel for all of you pensive folk who are seeking something you can reflect on for weeks on end. If picking up a book is too much for you, the movie isn't half bad either.
The Girl With The Dragon Tattoo, written by late Swedish journalist and writer Stieg Larsson, is the first novel in the Millennium trilogy. I had seen these books on the Barnes & Nobles website as well as on subway ads several times so I thought it couldn't hurt to see what all the hype was about. The book spans well over 500 pages but the read is quite light in terms of language. However, the content may be disturbing to sensitive readers due to the detective nature of the series so I do not recommend this for young children. For me the book picked up around one third of the way in and after that it was like the pages turned by themselves. The story was complex and innovative without being cluttered or mislead. The novel encompasses a variety of themes ranging from the abuse of women to corporate journalism in a cohesive, effective manner. I intend to finish the next two novels which are a continuation to the first before the end of the season. I recommend this read if you enjoy thrillers and action novels or films but think twice if you have a weak stomach.
This is how I like to spend my time when I'm home with nothing else to do: lounging on the sofa in my polka dot pajamas with my glasses perched upon my makeup-less face and crisp, slightly yellowed pages beneath my finger tips.