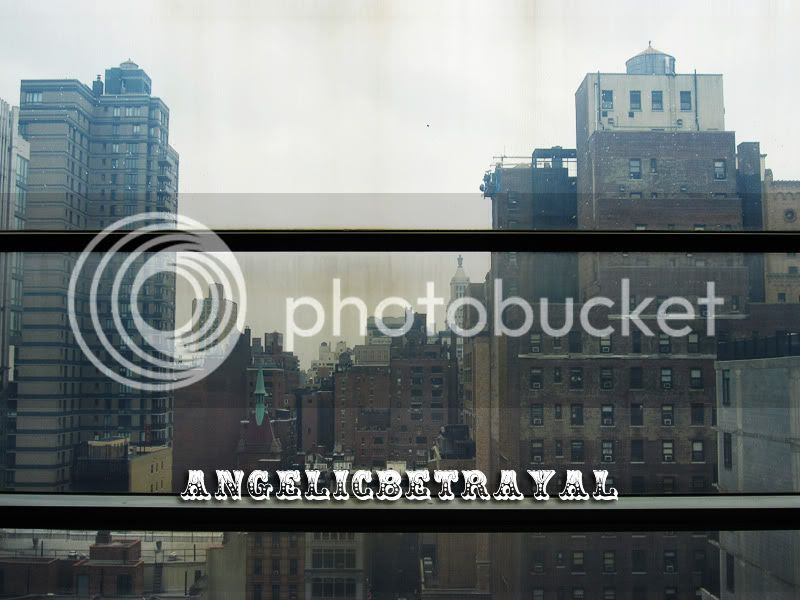 February passed oh so slowly and I'm quite glad that it is over.... School started again at the very end of January so four days out of the week I get a view of the city from bleak school windows. Most of my classes don't seem to be too challenging so hopefully the rest of the semester will go smoothly. 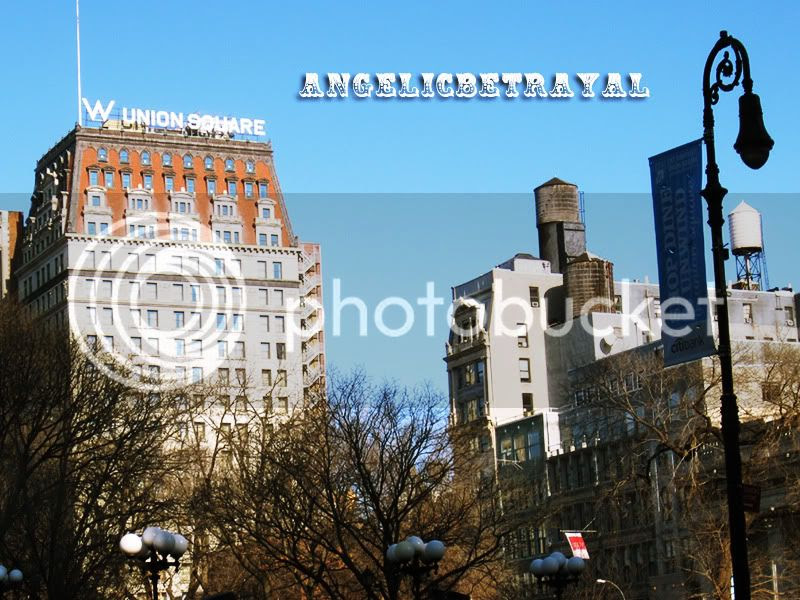 This winter has been unusually warm and sunny which is a nice contrast to last year when we had incredible amounts of snow. The past month has been mostly clear and I love taking walks when I have a bit of extra time. Union Square is very near to school so I take a trip there about once a month for some shopping (mostly window shopping!). 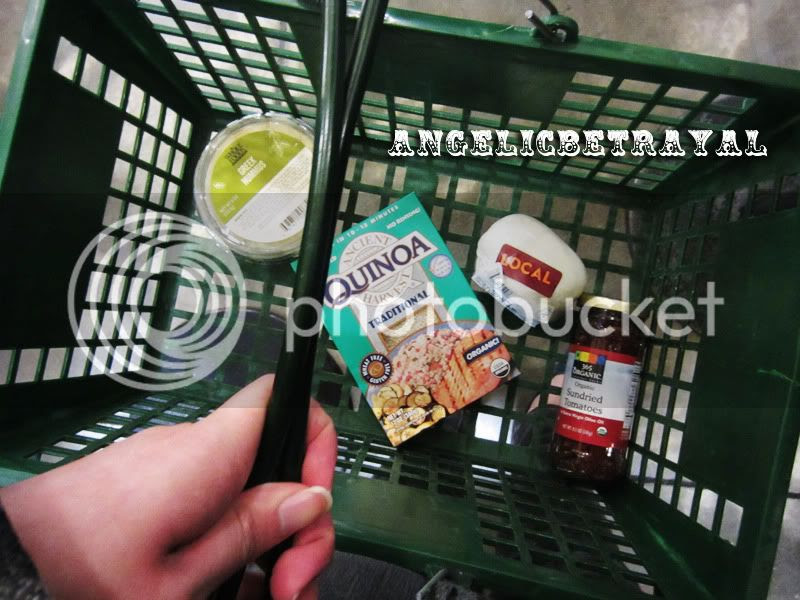 I am currently in the process of trying to eat a more varied diet and LilLadyLife is definitely one of my inspirations not only in terms of beauty but lifestyle as well. She posted a few of her purchases from Whole Foods which motivated me to go too (I've always loved the atmosphere at Whole Foods) and try out hummus. I also did some research and decided to try out quinoa. Quinoa is grain like, very high in protein, and overall is one of those "good for you" types of foods. I still prefer the taste of white rice but it's nice to change it up a bit. I love cheese and grabbed a ball of fresh mozzarella for snacking (mozarella + tomatoes + EVOO + salt&pepper is the best!). I also wanted to have some sundried tomatoes on hand for pasta and salads. My parents do most of the grocery shopping so I only buy food for home if it's something special that they wouldn't normally buy. We purchase fresh veggies and fruits at asian grocers because it is less expensive than all the fancy, schmancy organic stuff you get at Whole Foods. No hate, just saying. 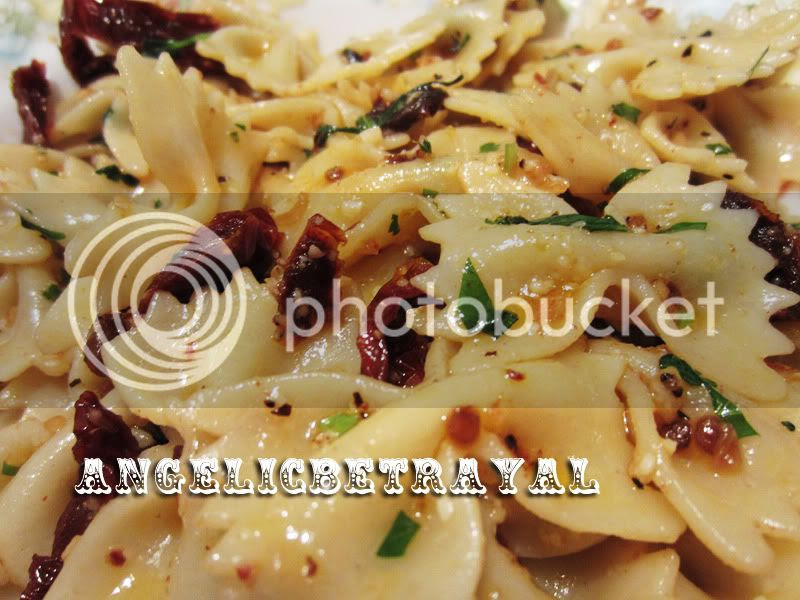 Yum! Pasta with garlic sauce and sun dried tomatoes! My dad cooked this for me (yes, I need to start cooking for myself ASAP!) and it's delicious. My dad wins at cooking Western dishes while my mom's Chinese dishes are better. But my mom's great at baking both Western and Chinese goodies (she also makes the best homemade pizza ever...). 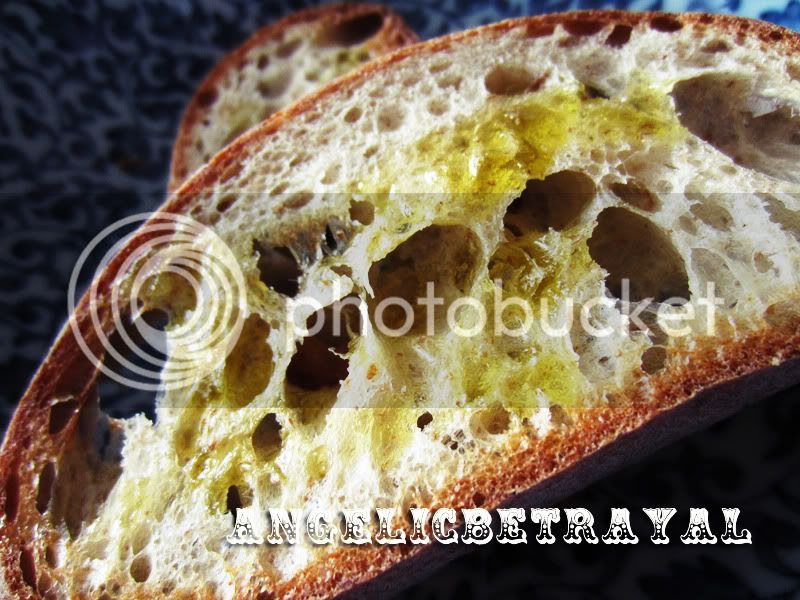 On Sundays there is a local farmer's market about 10 blocks away from where I live so sometimes my parents and I take a walk there to see what's for sale. I love my carbs so we came home with a loaf of ciabatta bread, one of my faves. I only like ciabatta when it's toasted and warm though. Drizzle a bit of olive oil on a piece of warm bread and I'm in heaven! I tried a few different combinations with what I bought from Whole Foods and I loved eating the bread with hummus. 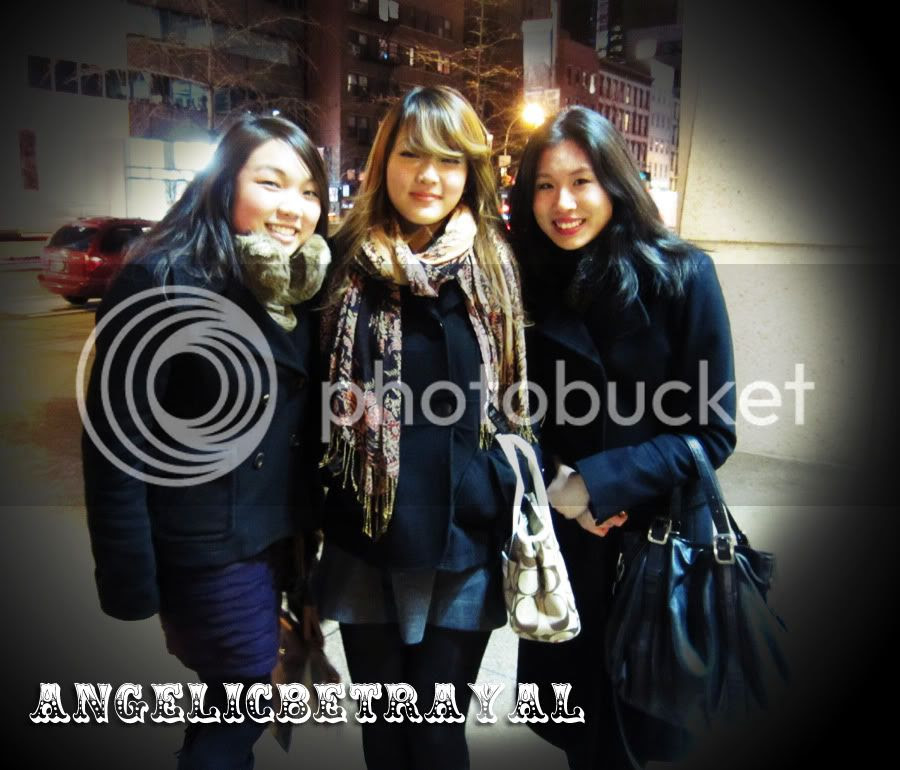 On the 12th, my good friend M celebrated her 20th birthday so we went out to have dinner in the city. I'm like the last blogger to not have Instagram (much less an iPhone) so I have to make my photos look all cool the old fashion way. Thanks Photoshop! 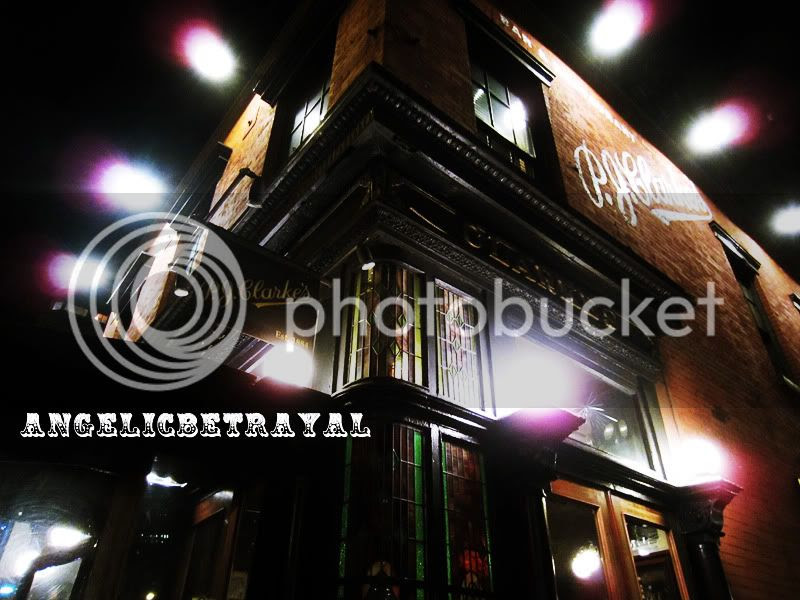 M chose to have dinner at P.J. Clarke's which features a seafood bar in the front half of the restaurant and a very cozy seating area in the back. I loved the bright lights outside the restaurant and the decor was homey and pleasant. The waiter was very accommodating and although the place was packed on a Sunday night, it had an unpretentious vibe. 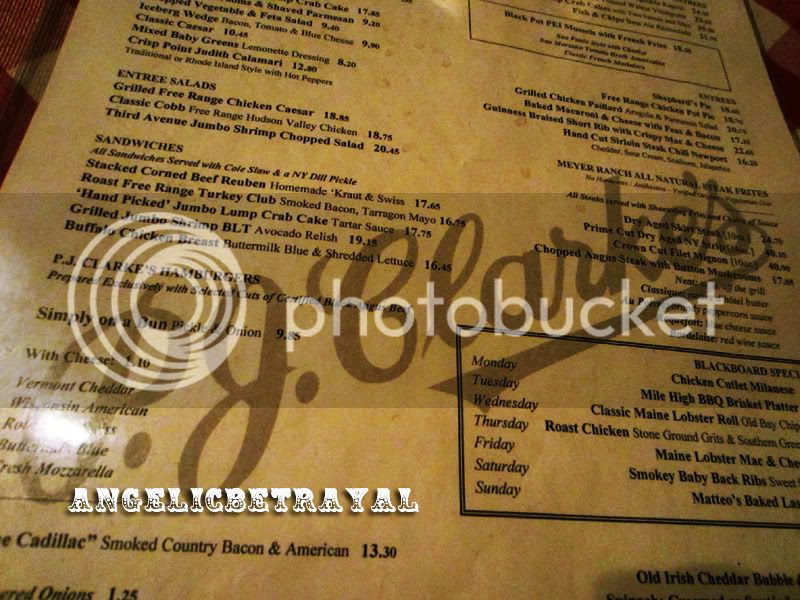 Their menu is mostly comprised of meaty options and a few choices of fish as well. I have pretty much reverted back to my omnivore ways now although I am planning to going meat-free for awhile soon. 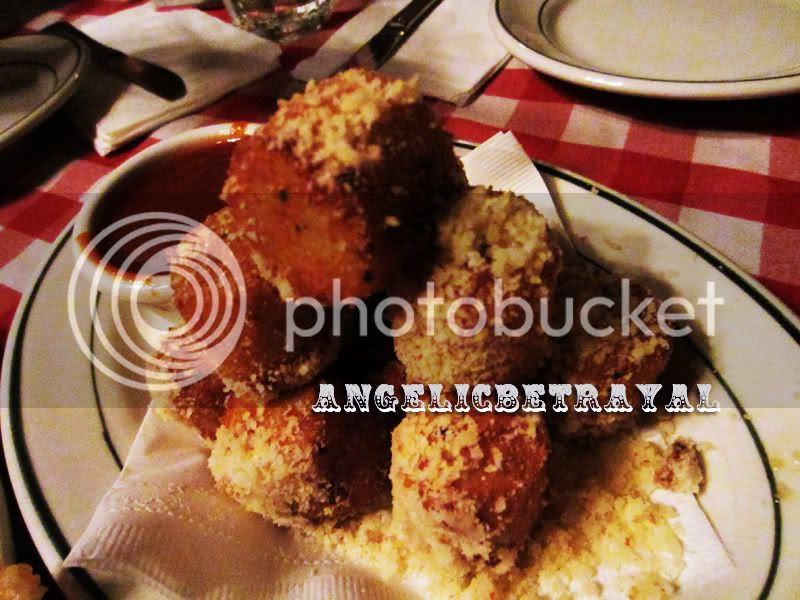 Our party of five started with the tater tots which were scrumptious. It's a great finger food and definitely good for younger crowds (there were a few tables of families with young children). 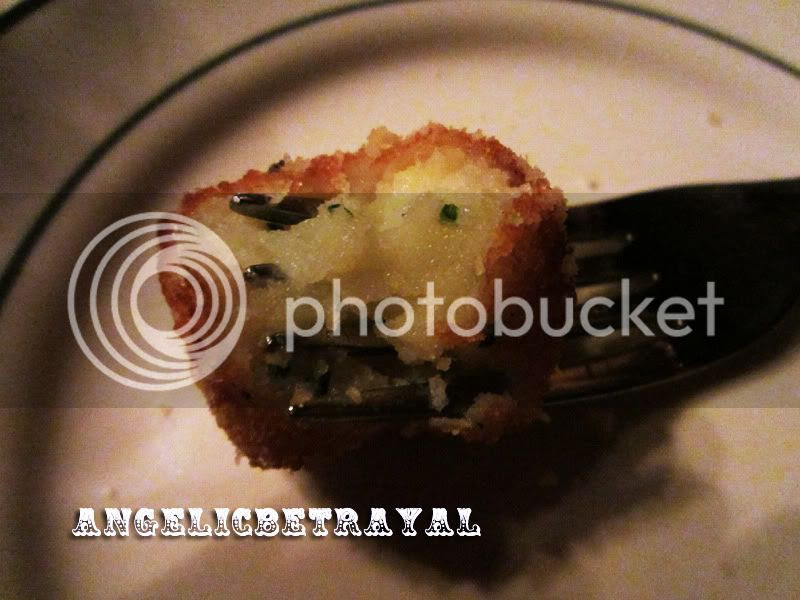 Tater tots will probably always remind me of public grade school lunches but these actually had real potato in them and some herbs to boot! 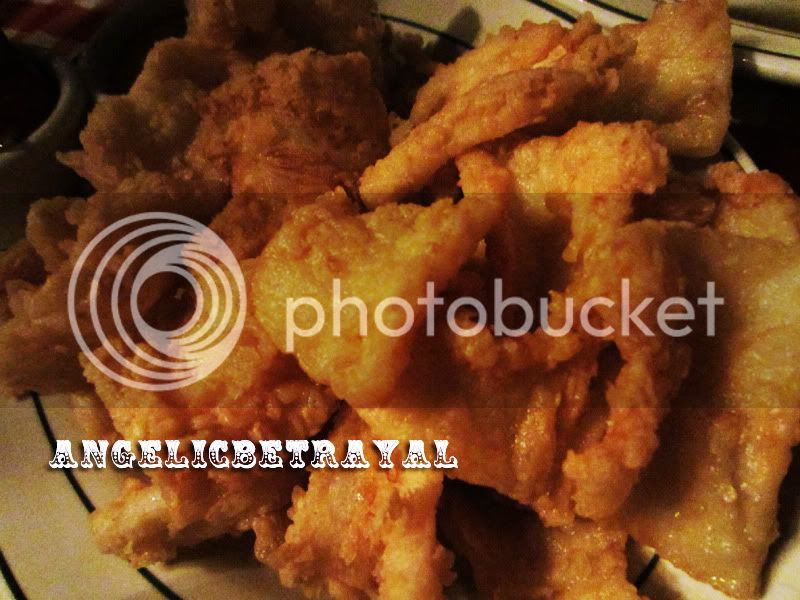 I love calamari and I almost always get calamari if a restaurant has it on their menu. I have to say P.J Clarke's rendition is not my favorite. Not bad but they don't come close to others that I have had. 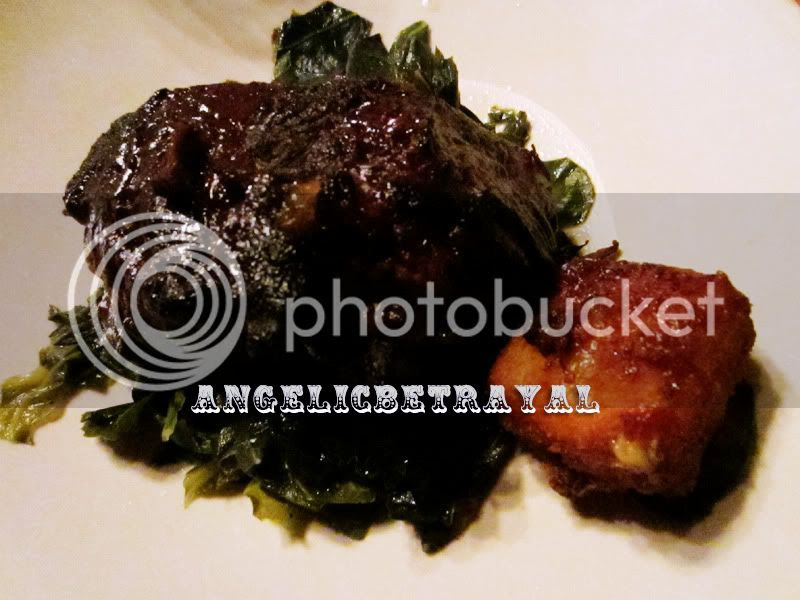 I had the Guinness Braised Short Rib for my entree and it was okay. I don't really know what inspired me to order this but the meat was very tender and moist. Looking back, I should have ordered a steak. My dad later told me that short ribs are very fatty and cause heart attacks.... But it's not like I eat it everyday so I think I'll be fine. What is that little brown lump you see on the right? 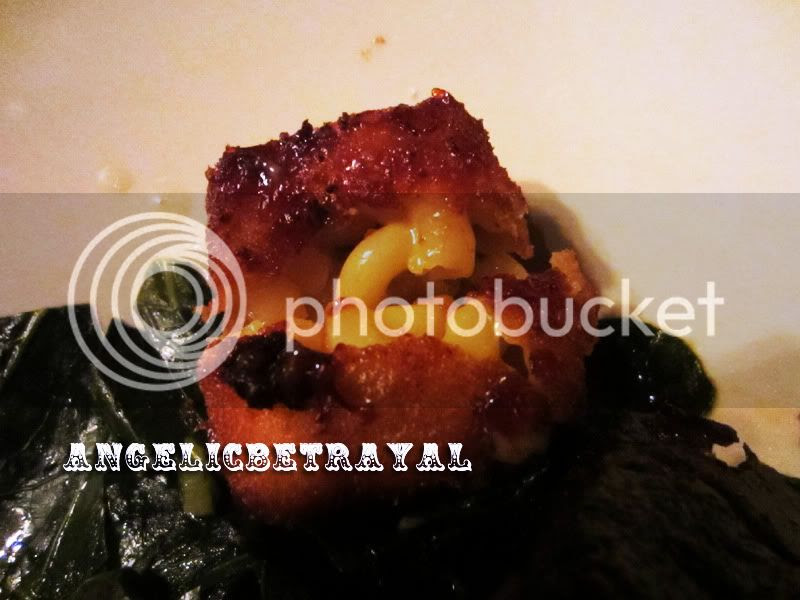 Well, it's mac and cheese! How cute is that? I wish it was a little bigger because I was expecting a side of mac and cheese but this was a novel little decoration. 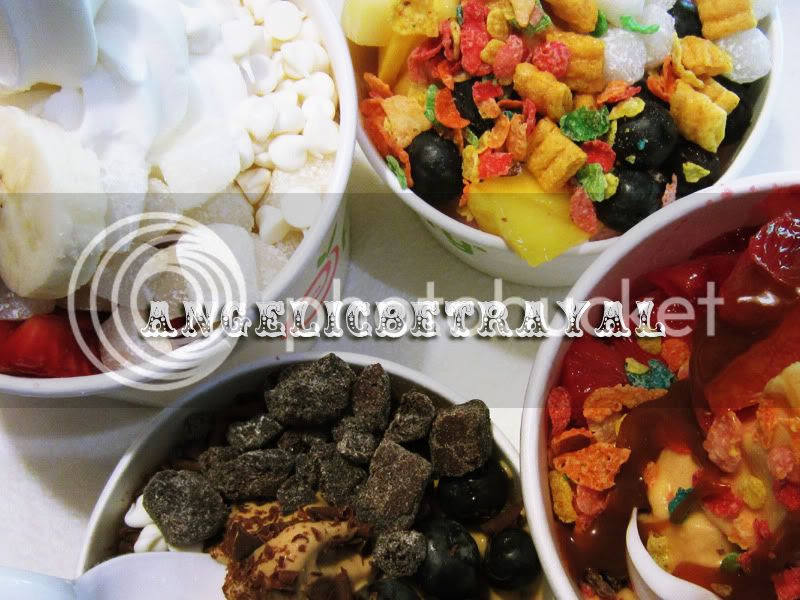 We finished off the evening with some froyo from Pink Berry. I only eat Pink Berry very occasionally because it's so gosh darn expensive and it's loaded with sugar. The bottom left cup is mine.... Yes, I felt very guilty that night. 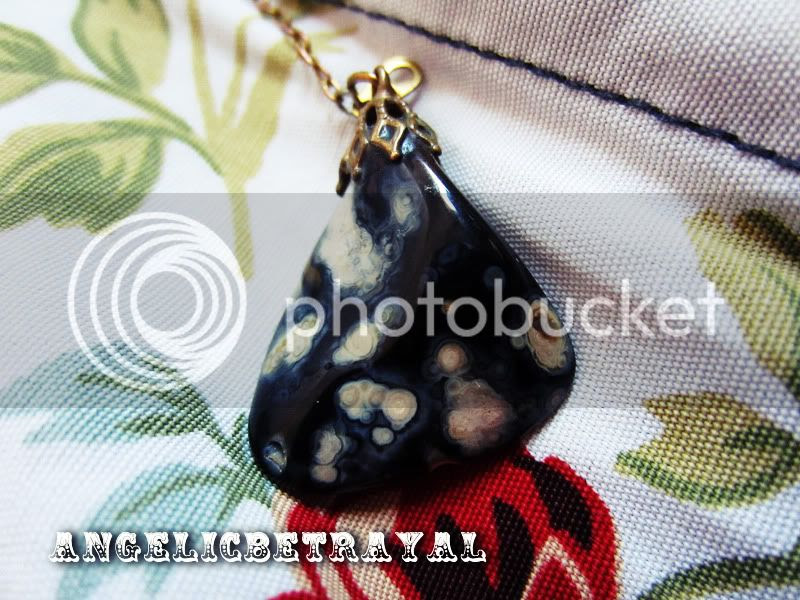 I bought my first thrifted pieces this month from AuH2O, a boutique style thrift shop located near St. Marks Place. I had visited the store once before in January but did not purchase anything. Earlier this month, Yelp was doing a $20 for $10 (Yelp Deals are like Groupon and Living Social) so I figured why not. I snagged up this dainty dark blue pendant and... 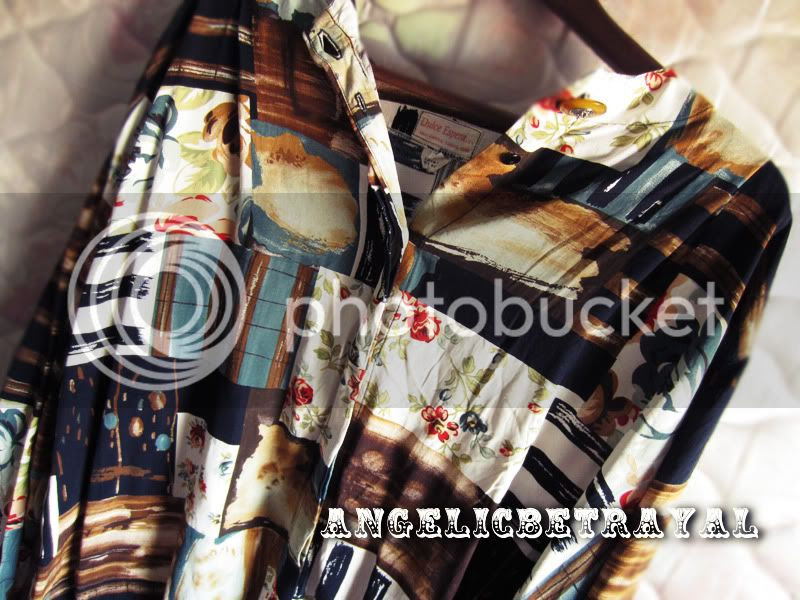 this amazing shirt! My boyfriend would definitely categorize this as a grandma shirt (most things that I like happen to fall into that category) but I adore the print. The necklace was originally $12 and the shirt was $14 but I had $20 in credit and it was Thursday which is student discount day (15%). I paid an extra $2.10 for both items so $12.10 isn't so bad. I totally love the shirt and I am so excited for Spring and Summer so I can style this piece like no other. It's slightly over sized which means I can wear it several ways and the material is a very smooth and lightweight fabric. The brand is unknown to me but all the better! 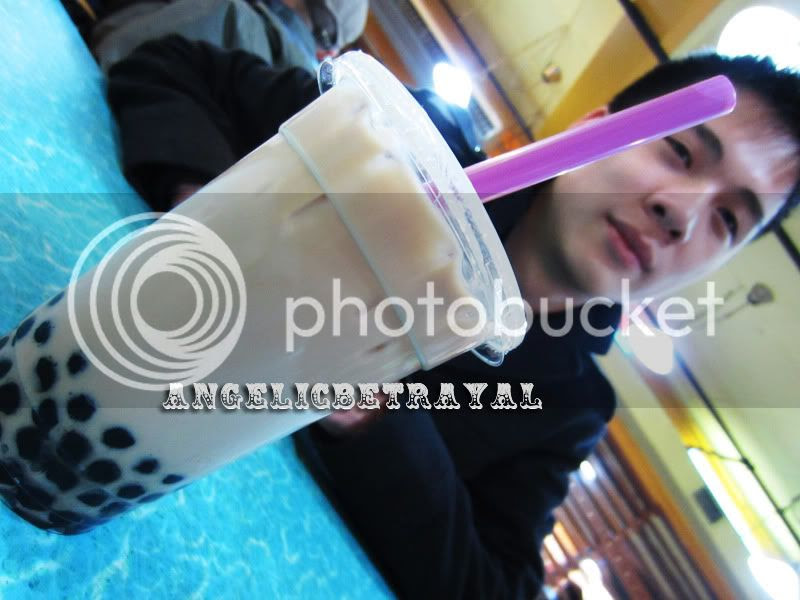 A few of you seem to like when I talk about Flushing food so of course you have to drink bubble tea whilst in the neighborhood. Again, I don't drink bubble tea very often ($2.50 adds up over time) and it's not very good for you but it's a nice treat once in awhile. My boyfriend drinks quite a bit of it and I always steal his! 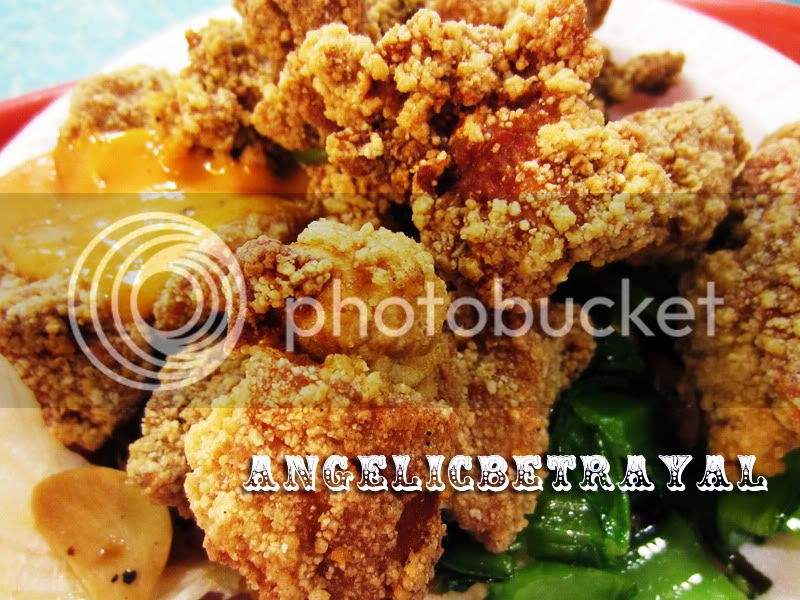 In my high school days, my friends I would go to Flushing Mall quite often for food because it was affordable. My favorite dish is the salt and pepper chicken which comes with a heaping plate of chicken, rice, and some side dishes all for about $6. This is definitely not health conscious food but once in awhile is fine by me. 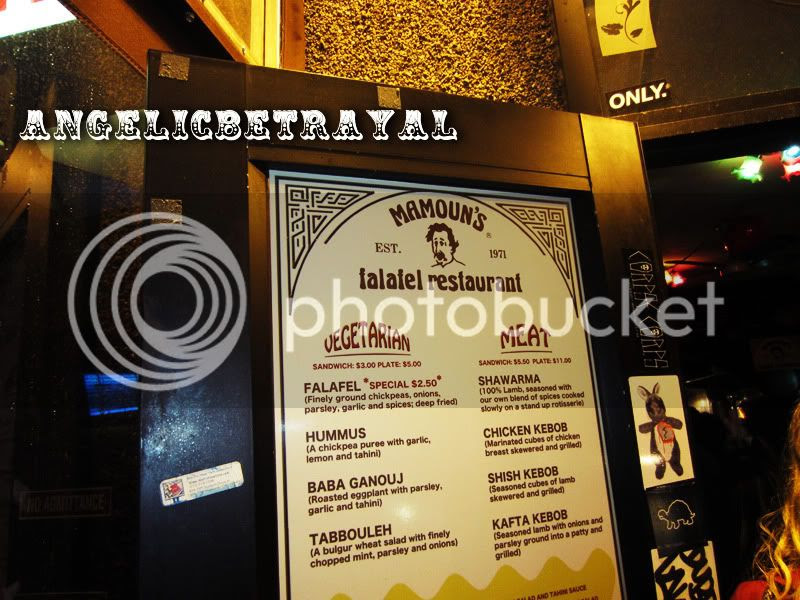 I was in search of cheap street eats and Mamoun's Falafel had rave reviews on Yelp so I figured it was worth a taste. 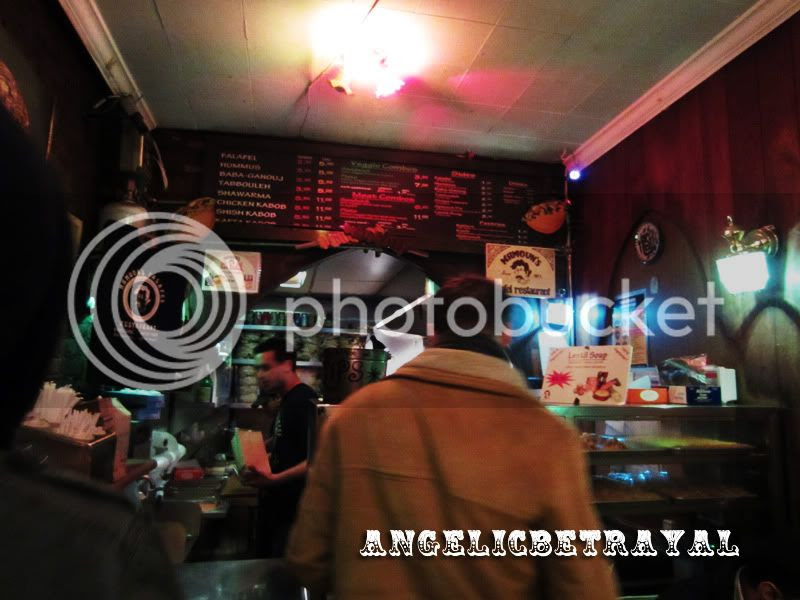 This might not be a street cart vendor but it might as well be. There are a few tables on the side of the eatery but mostly people just grab and go. I stood here for about fifteen minutes and at least twenty people walked in and out during that time. The dimly lit hole in the wall atmosphere comes complete with all kinds of stickers featuring underground bands, people, and organizations seeking free publicity on the napkin dispensers. 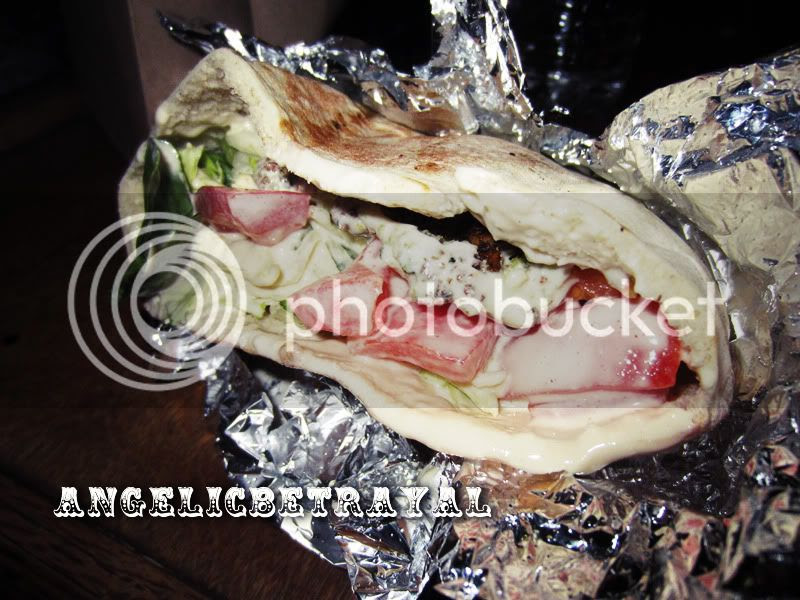 The $2.50 falafel did not live up to the hype for my tastebuds. The pita was not warmed up and the sauce only permeated the top half of the sandwich. The taste was there but I just wish they kicked it up a knotch and were more generous with the sauce. For $2.50 I can't complain much but they won't be seeing me anytime soon. 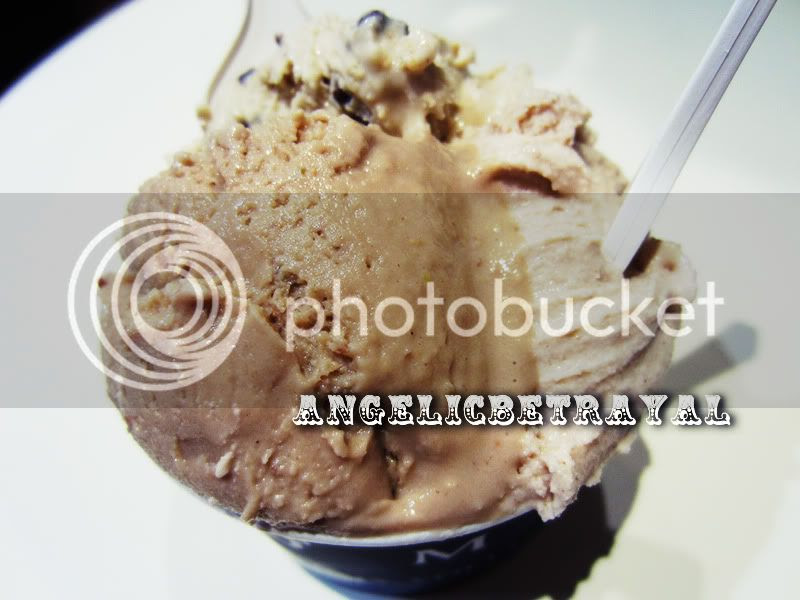 After our quick bite at Mamoun's, my boyfriend and I wandered to Grom, a gelato shop at a busy corner of West 4. This was my first time having gelato and it tasted and felt a lot like ice cream. I always assumed gelato was denser but I didn't detect a noticeable difference. They offered an array of tasty flavors and we settled with Cinnamon, Hazelnut, and Tiramisu. My favorite was Tiramusi followed by Hazelnut and I did not care for Cinnamon at all. Desserts always seem to sit badly with me because they are so ridiculously overpriced but my cheap dinner evened things out. 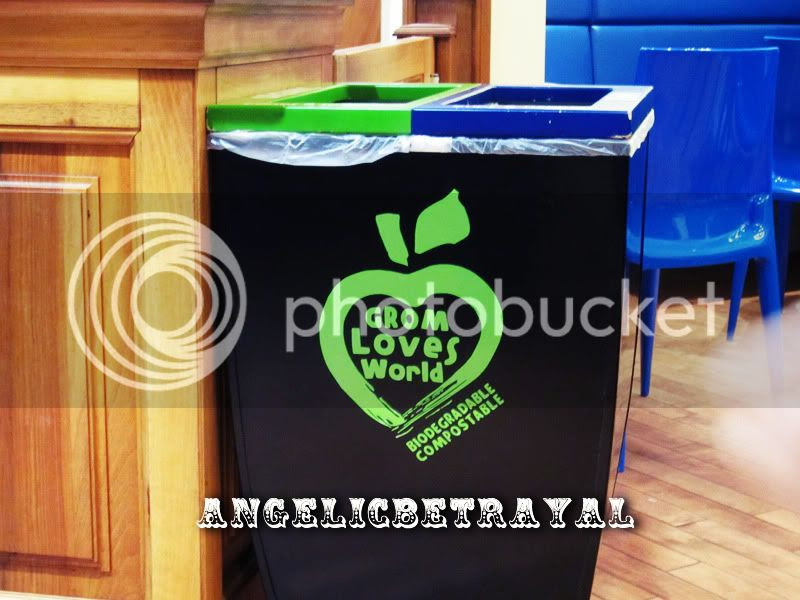 The eco-friendly waste bins at Grom get a huge thumbs up. They had separate receptors for different types of waste which was cool. 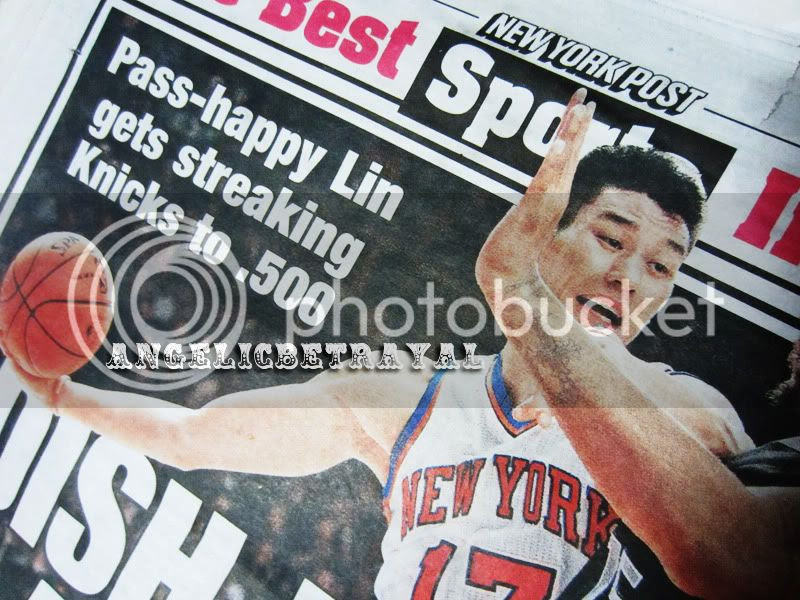 I will end this post with the sensation that swept New York City, the Asian community, and pretty much the world: Linsanity. February was all about basketball and one could not avoid it anywhere. Jeremy Lin shook up stereotypes and expectations, brought life back into the game, and converted many into basketball fans (although I'm not sure how long that will last). 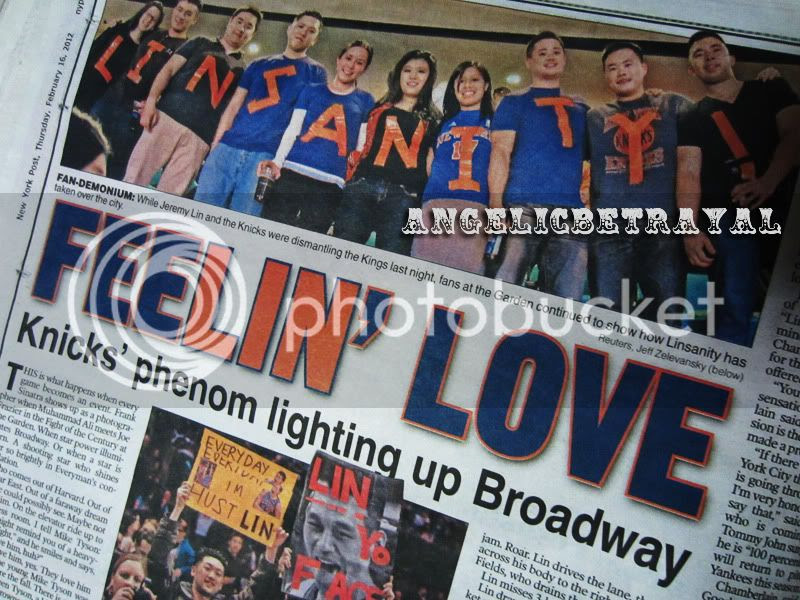 While I won't be shelling out thousands of dollars to go to Madison Square Garden anytime soon, I support Jeremy Lin and the Knicks and hope they have a great season. Also, you have to admit the puns can be incredibly witty and catchy!

That wraps up my month of February. The stress has yet to seriously hit me but in a few weeks school and all the rest of it should be piling up. What have you been up to recently? Anyone have any must try recipes for a beginner like me to try?

Labels: about me food Monthly Wrap Up