Another month gone by too soon! June meant the start of summer but also summer classes. Thankfully my professors are amazing and three days of class is a heck-of-a-lot better than my usual four days. The power button on my point and shoot (Canon Powershot ELPH 300 HS) decided to jam itself (I swear it wasn't any fault of mine!) but I bought insurance for it and took it to Geek Squad for a repair. Unfortunately they could not fix the problem and it turns out the model is discontinued and out of stock.... Boo.... So now I have $200+ in Best Buy store credit which makes me happy but also quite sad as I really enjoyed my cute red camera. I didn't want to overload Instagram with photos so I didn't snap up photos of everything that went on this month. Anyways, camera woes aside, let's uncover what I did during the past month! 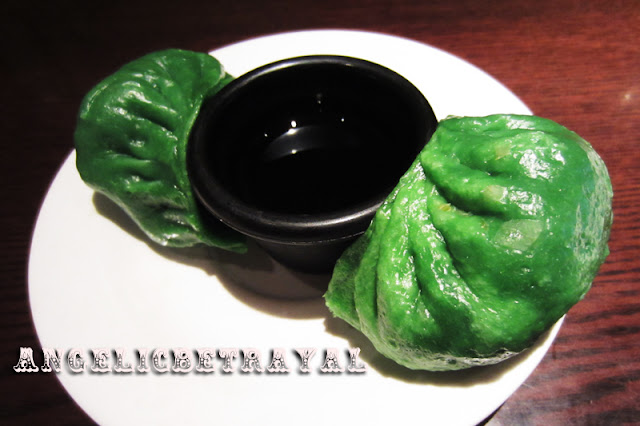 I guess I'll start with one of the most disappointing food experience I had this month. In fact, this was one of the worst tasting meals I have eaten in a long time. I met up with some former co-workers for lunch at Vegetarian's Paradise 2 because my friend had been there before and liked it. Many Yelpers also seem to like this place so I had high hopes. I have no idea if I went on an off day but I will never come back to this place again. It's no fault of my friend because even she was put off by the food that day.
I ordered from the lunch special menu which included an appetizer, soup, and entree. I chose the spinach dumplings (shown above) expecting normal looking dumplings with spinach innards. It turns out the wrapping is supposed to be spinach but I am almost certain that the wrapping is only green due to food coloring. The wrapping was thick and chewy in the worst possible way and the filling was unappetizing as well. 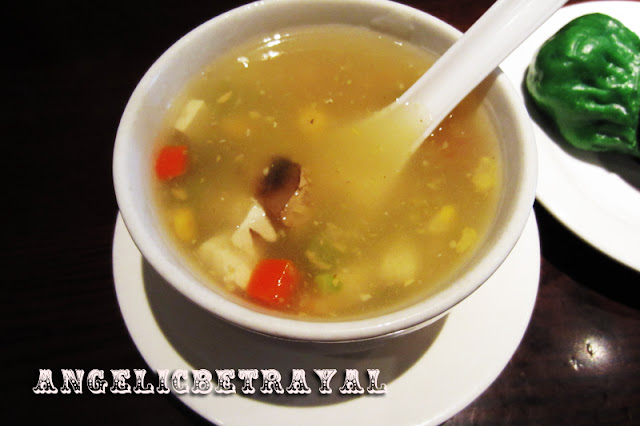 The soup was thick and not better than the appetizer. This is what I expect when I order American Chinese takeout. You know, when you get fried chicken wings and french fries with your pork fried rice. That kind of Chinese food. Not good. At all. 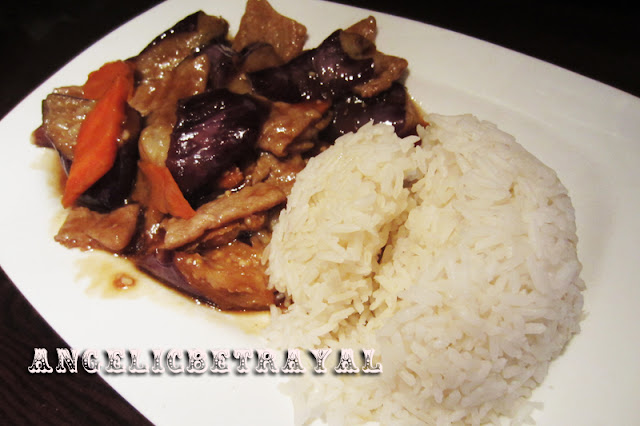 The main dish, garlic eggplant with faux chicken, was not much better. The dish could have been perfectly edible but it was the severely undercooked rice that bothered me. I hate undercooked rice with a passion. Seriously? An Asian themed restaurant that can't steam rice.... The rice cooker pretty much does everything for you nowadays too! Seriously, save your money and do not eat here. There are many more tastier and cleaner restaurants in the West Village. 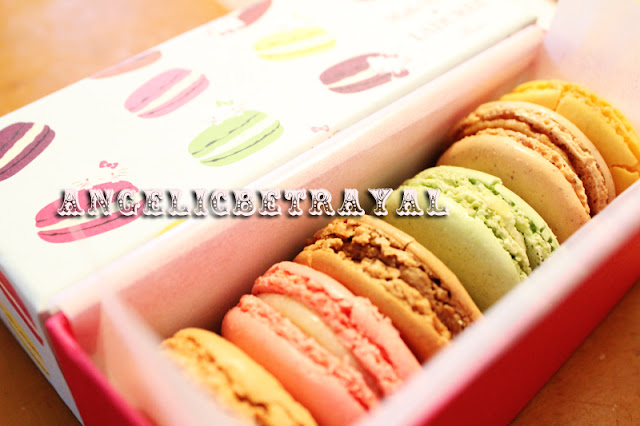 Another disappointing food adventure was Ladurée which is loved by seemingly all. These tiny morsels are ridiculously expensive but the exquisite packaging, shop front, and sales staff made me feel a bit better about dropping so much money on some sweets. I'm not too keen on very sweet foods so I found these to be too sugary. I guess that's a good thing since my wallet would be taking a hit each week if I liked these as much as everyone else.

My boyfriend is taking summer classes with me in the city so we get to spend a lot of time together (just like in high school!). We like to wander around the neighborhood and we saw this patch of "beach" along the water. What you see in the picture is basically all the sand that above the murky waters.

I treated my boyfriend to a lunch buffet at an Indian restaurant since he had been wanting to grab some Indian food for awhile. To be honest, the tastes are a bit too strong for me and I'm not a big fan of spicy food so I mainly enjoyed the roti (flat bread) and the yellow seasoned rice. Still, for $8 it was a good meal.

As you might have seen in a previous post, I attended a blogger event at Jurlique's flagship store. It was my first time at a blogger event and it was great to meet fellow bloggers and I had a chance to try Jurlique products for the first time.

Now that my boyfriend and I go to school together we get to eat together a lot more and I finally got to try a waffle from the Wafles and Dinges truck! After an unsatisfying meal at Rickshaw's Dumpling (expensive and strange flavors) we decided to get some dessert. We loaded up our original wafle with whipped cream, nutella, bananas, and strawberries. Usually we're let down by hyped up food but we can't wait to treat ourselves to another wafle soon. The wafle is chewy, soft and has just the right amount of sweetness. I often see the truck hanging out on Fifth Avenue on the side of the Flatiron Buidling but it moves around at times.

I started going to the gym this month which was surprisingly not that bad. I haven't been to a gym for about two years and I thought it was about time to take advantage of the free school gym. I need to be more consistent in terms of going to the gym and I'm going to try for two times a week.

I ate dinner at Clyde Frazier's again (went there for the first time back in March) because my cousins really enjoy eating there. The basketball "court" wasn't ready the last time we went but this time we had the chance to throw a few post-dinner free throws. The kid in the orange was a stranger but he was really good! 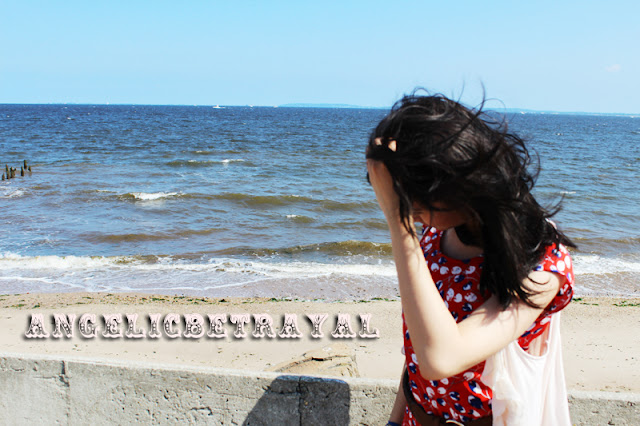 For Father's Day we headed to Staten Island for a barbecue which I somehow failed to photograph. We strolled along the beach and enjoyed the sunny day with family and friends.

My friends and I somehow usually find ourselves eating something totally unhealthy after going to the gym. We wandered to Times Square and chose Junior's as we wanted some cheesecake to end the evening. It was my first time eating at Junior's and their portions are HUGE. It's great when I eat with the guys since they always split my leftovers when I'm too full.

I finally got to bring my boyfriend to the Highline which is one of my favorite spots in Manhattan. The ambiance is perfect, the architecture is quirky, and the people are beautiful. I don't hear too many people talk about the Highline and I only found out about it last year but it really deserves more praise. We ended up walking down to Chelsea which is a lovely neighborhood as well. I got pretty excited when I saw the Diane von Furstenberg flagship as I remember seeing it on an episode of The City. I think I only watched about one episode of that show but I think Whitney Port or one of the girls interned there. Yeah, I had a mini internal fangirl moment.

As I mentioned at the beginning of the post, there were a few happenings that I failed to produce in photographs. I went to my first improv show at the P.I.T, the People's Improv Theater. All of the shows on Wednesday are free and they have at least one free show everyday. I read mixed Yelp reviews but I thought it couldn't hurt to go to one show since the most I would be losing would be an hour of my time. The show turned out to be quite funny and I had a good time. I hope to go back another time before the summer is over.

My boyfriend's birthday was on the 23rd and he kept it low key by celebrating with his parents and me. We spent a day relaxing in his neighborhood, checking out the farm (which I mentioned in January), and eating dinner at the Cheesecake Factory. His family had a giftcard to the resturant which was the main reason we went. I ordered the fish tacos which unfortunately did not meet my expectations. The pastas everyone else ordered looked scrumptious though.

That's about all I can remember from the past month. June was a nice mix of catching up with friends, school, and enjoying the sunshine. I can't wait to see what July has in store!

Labels: about me food Monthly Wrap Up