July was possibly one of the most eventful yet relaxing months I've had this year so far. Summer classes simmered to a close at the middle of the month and I enrolled in driving classes. I met up with a lot of friends who I hadn't seen in awhile over lunches and dinners. If I had a point and shoot there would have been many more photos but alas I'm not trekking around the city and back with a bulky slr.

The photo above was taken at the end of a long day at the beach with old friends. We had to make sure we went to the beach at least once this summer so we planned early! We drove out to Jones Beach the day before Independence Day and the weather was amazing. The sun was shining and the waves were refreshingly cold. The best part was that there wasn't a whole lot of people on the beach so we had no trouble finding a place to set out our beach towels. I've been lusting over the graphic tees from Brandy Melville but I'm curbing my shopping so I cut up an old abercrombie kids tee. What better place to wear my little creation than the beach?

Summer blockbusters always get me and in July I watched Ted and The Dark Knight Rises. I really wanted to watch Spiderman but the timing didn't work out for me so alas I've given up on seeing Andrew Garfield and Emma Stone together on the big screen. Ted isn't a movie I'd normally pay to see at the theaters but I got a few chuckles out of it. The Dark Knight Rises was amazing and I could not get over how gorgeous Anne Hathaway looked. I really hope there will be another installment in the Batman series. 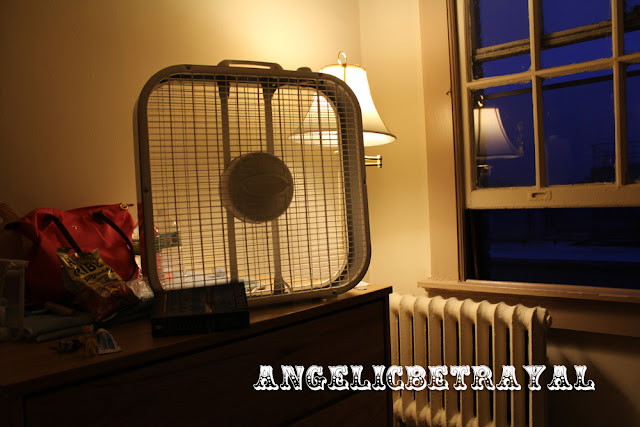 The highlight of July was a three day trip to Boston with the boyfriend. We had never been to Boston and never taken a trip by ourselves either so this was a trip of firsts. Boston was one of the more practical destinations for us since it's relatively easy to get to from New York ($15 buses from Chinatown!) and we don't need a car to get around. Unfortunately almost all the hotels in the area are quite expensive, or at least not wallet friendly for us college kids. We decided to stay at a hostel instead, another first for the both of us. I was incredibly worried about dirty sheets and bugs all over the place before arriving.

But lo and behold, the room was clean and the only problem was the lack of air conditioning. We happened to pick the three days when the East coast was having a heatwave. At home I do not have an air conditioner in my room and I've been sleeping in my room for the whole month of July so I could deal with the hostel. My boyfriend on the other hand did not fare so well. For $35 a night for each of us, it wasn't totally horrible but we both agreed we'll probably be sticking to hotels in the future.

On our first evening we strolled around the neighborhood as we were too tired to journey back to the downtown area. With the help of Yelp and some googling, my boyfriend found a quaint little Italian restaurant which had a sweet, romantic atmosphere. I honestly forgot the name of the restaurant and had to google it just now but it's called Trattoria Toscana. Thank you Google. The servers were obliging and I didn't feel the rush that New York usually imparts.

We shared an appetizer of mixed crostinis which were generously topped. My favorite was probably the simple tomato crostini but the chicken pâté was nice too.

My entree was the penne alla carrettiera, essentially tomato pasta. The pasta was al dente and the sauce was good but it wasn't a particularly interesting dish (my fault for ordering it, I suppose). I only ate about a third of it and my boyfriend finished the rest along with his risotto. When the weather is too hot I usually lose my appetite so I didn't eat much during this trip. That would probably be my biggest annoyance during the whole three days because meal times were difficult for me to handle. 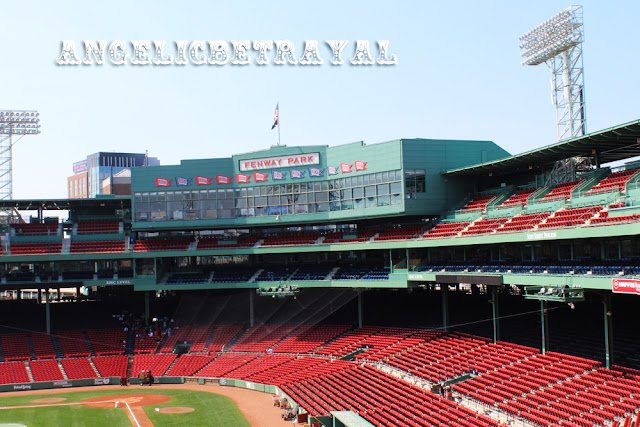 The next morning we walked to Fenway Park to take a tour of the stadium. I am not a baseball fan by any means but I appreciate architecture and history so both of us loved the tour. Our tour guide was a young kid who was actually younger than us. He had been going to Fenway since he was a baby so he really felt attached to the park. I highly recommend the tour if you visit Boston. 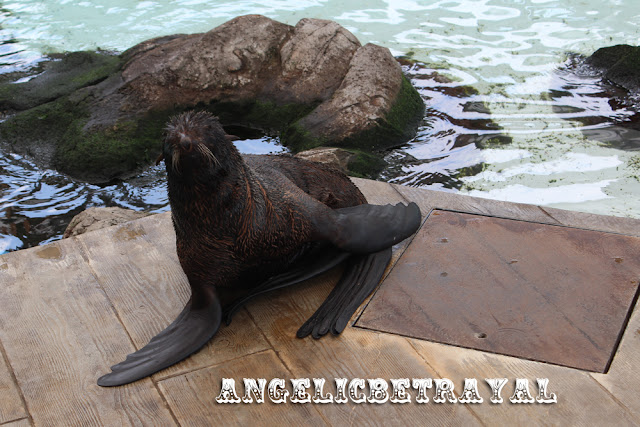 Next we took the T (Boston's public transportation system) to the New England Aquarium. Let me just say that I was very excited to take the T for the trip because I think you can tell a lot about a city by it's transportation. I think I'm so used to the constant construction and delays on the complicated New York City MTA that the T was too simple for me to grasp. Boston is a pretty small town and if the weather wasn't so blistering hot, we probably could have walked to all of our destinations. The whole Charlie Card or Charlie Pass system doesn't really make sense to me.... Why not just have the Charlie Card and save paper than have two types of passes.... When we were heading back to the hostel at around 10 p.m., we were the only ones waiting on the platform while the opposite side was full of people. Never have I ever been the only one on a subway platform in New York. I'm assuming most Bostonians drive in from surrounding neighborhoods to go to work.

As for the aquarium, it was smaller than I expected as I believe all the live animal exhibits were located in a single building. The number of groups of small children were quite overwhelming and the place was pretty packed in general. Also, admission is over $20 per person which I thought was quite expensive. Hopefully they reinvest that money into the resident animals or research. 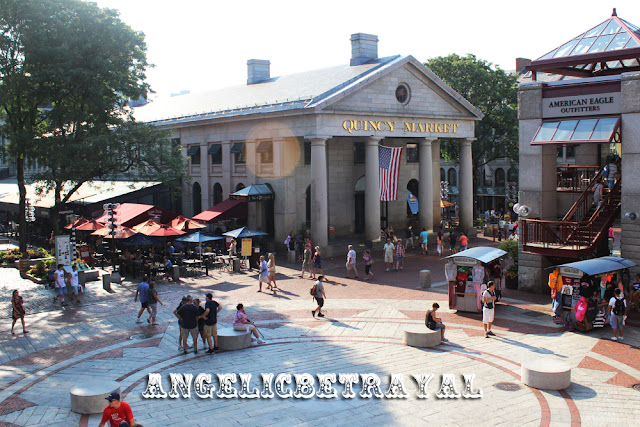 Next we wandered to Quincy Market and by this time it was scorching. We strolled through the interiors of Faneuil Market and Quincy Market hoping there would be air conditioning but no luck. The halls were lined with overpriced food stalls and tourist galore. 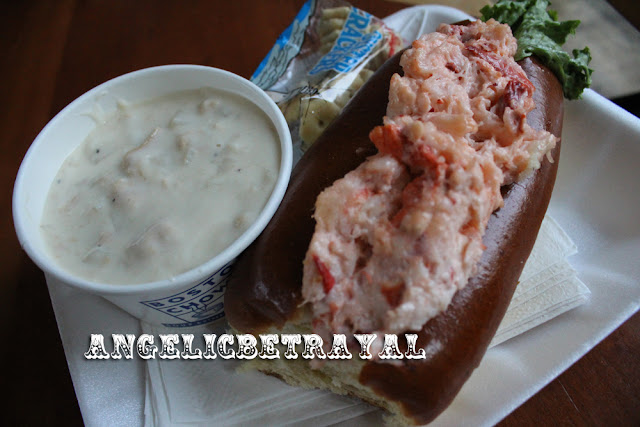 I thought we may as well pick up a cup of clam chowder and a lobster roll since we were in New England but I was very mistake. The chowder was decent, not bad but not the best I've ever had. The lobster roll was a complete ripoff as they barely cut into the bread so the meager shreds of lobster meat only sat on the huge bun. There was barely any lobster and it wasn't high quality meat. I was very disappointed and I can't recommend purchasing any food from Faneuil or Quincy.

For dinner we dropped by Durgin Park and I think the air conditioning and ice water were much more welcome than the food. Don't get me wrong, the food was good but when it's hot I only need water. My boyfriend and I almost always order calamari if it's on a menu so that was our appetizer. Not satisfied with the sub par lobster roll we shared earlier, my boyfriend ordered Durgin Park's special of the day lobster roll. My appetite was still M.I.A so I ordered an incredibly boring salad. I stole some bites of the lobster roll though. Their french fries were delish!

After dinner, the sun had set and a steady breeze cooled the city down to a comfortable temperature. We wandered around the city and ended up getting somewhat lost as the GPS on our phones was messing up. We managed to find the T by retracing our steps and promptly headed back to the hostel. The next morning we left quite early so nothing much to say about that day. Overall I'm fortunate to have had a chance to visit Boston and it was great to plan everything with my boyfriend. For our next trip we will probably be setting our sights a little further.

Back in the city I finally went out to The Meatball Shop with two friends. I had three of the sliders, the veggie meatball with pesto sauce, the beef meatball with parm sauce, and the special lamb meatball with mushroom sauce. The beef meatball was probably my favorite but all were scrumptious and surprisingly filling. The side of mashed potatoes was fluffy and buttery, perfection in a dish. I left a very happy and full gal and my wallet was quite happy as I paid $17, tax and tip included. Dinners usually cost around $30 for a similar restaurant.

To wrap up the month, I attended Birchbox and Caudalie's event for Birchbox subscribers at the Plaza Hotel. This was my first time attending a Birchbox event and I was extremely excited. The guests were treated to mini facials and it was a good chance to network with other beauty enthusiasts. The Caudalie Spa at the Plaza has a unique aesthetic in that there is a wine cellar in the main room. As you can see from the photo above, every guest was supposed to receive a Birchbox with some Caudalie deluxe samples. Unfortunately it was a grab and go type of system and I didn't think of getting my box early in the evening. I saw multiple people take more than one box and in the end I didn't get to take a box home which was very disappointing. A member of the Birchbox team went around and collected email addresses from the gals who didn't get a box so hopefully I receive my box in the mail soon. I have pretty high expectations from Birchbox so I think they'll pull through. If and when my box comes in, I'll definitely do a post showing you guys the contents! The box fiasco definitely put a damper on my evening and for many of the other girls too. For the people who took more than one box, you should really be ashamed of yourselves because it was a complimentary event and your greed made the night less than amazing for others. I really wish the honor system was fool proof but alas I think Birchbox should keep a better eye on their gifts. Nonetheless, I was thrilled with the mini oxygen facial treatment which felt like a long cooling mist on the skin and the entire event in general. I hope I can attend another Birchbox event in the future. Thanks Birchbox!

How was your month? Did you do any traveling or sightseeing? What were some of your favorite meals this month?
Labels: about me Birchbox food Monthly Wrap Up travel