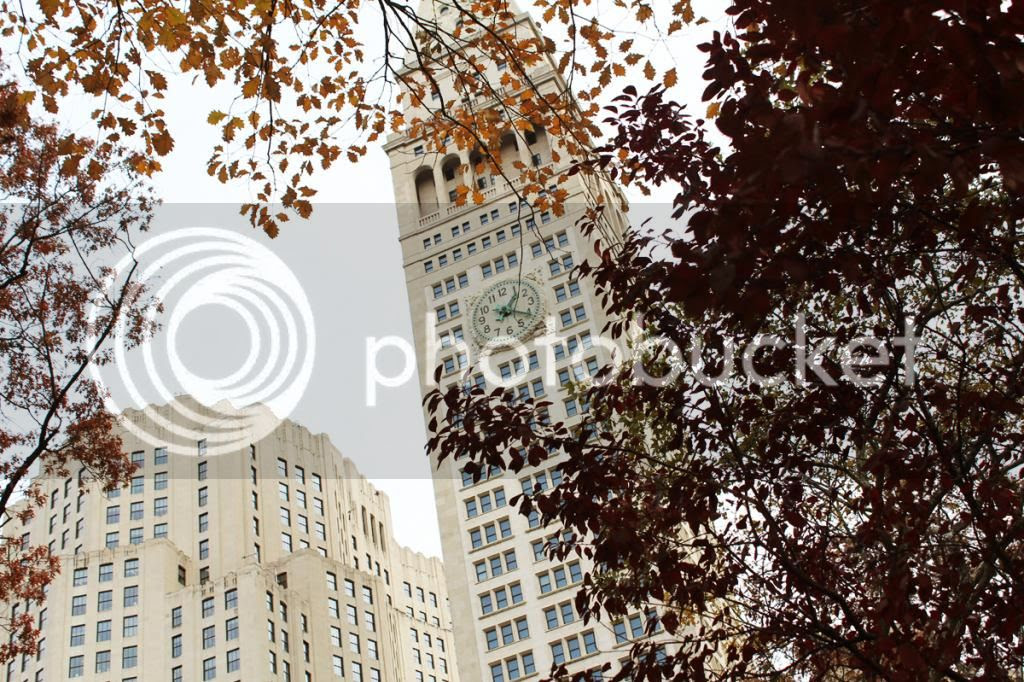 Can it be the end of November already?! The year is almost at an end and November was a relatively good month just as we approach December, my favorite month of the year. In the past the brisk weather was more of a downer but aside from the first week or so, the weather was quite agreeable. This was the month that a lot of exciting things were coming together and while the preparation was (and still is) stressful and troublesome, I am looking forward to the upcoming months. I know I am being quite vague but in the next few weeks and months you will get a better idea of what I mean!

So about that weather.... Days after Hurricane Sandy, we experienced a sudden cold front with a decent amount of snow. Thankfully the snow melted pretty quickly and the streets weren't completely slushy. Snow is great only when I have nowhere I have to be and I can avoid public transportation. 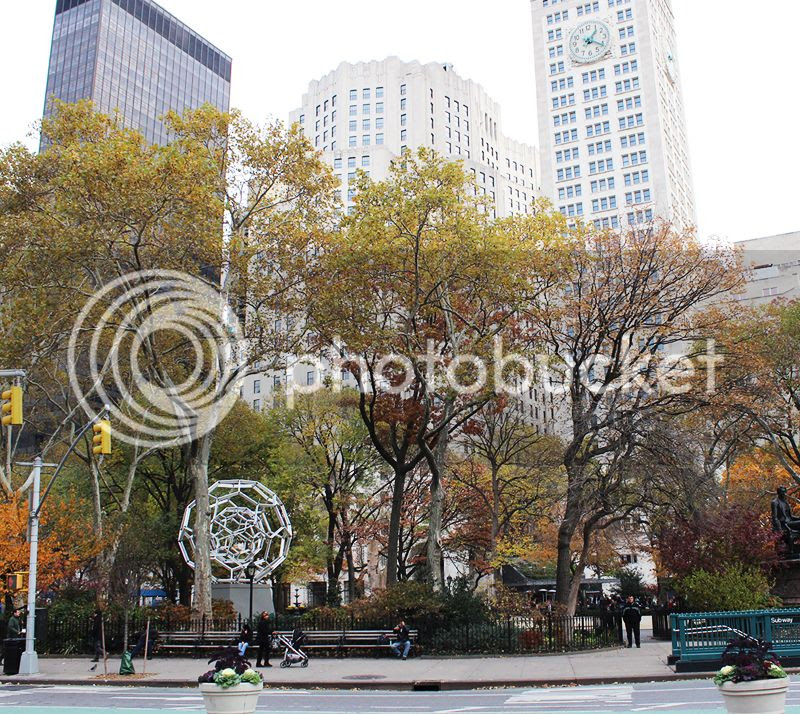 There are still quite a few trees that are in the process of changing colors which always makes for a beautiful scene. I make it a point to try to walk through Madison Square Park on my way to class because I love seeing all the tiny critters and being enveloped in fresh foliage. Not to mention Shake Shack smells pretty darn good.

The Madison Square Park squirrels are incredibly friendly and one of them thought I had food so he or she (let's just assume it's a boy) proceeded to climb onto my boot. I already had my phone out snapping photos of another squirrel so I quickly took this shot before shaking my boot to get the hungry little guy off. Even after I had gently shaken him off, he continued to stare at me from about a foot away, waiting for scraps. If you drop food accidentally, the squirrels and pigeons of the park will not be afraid to swarm you. Consider yourself warned. 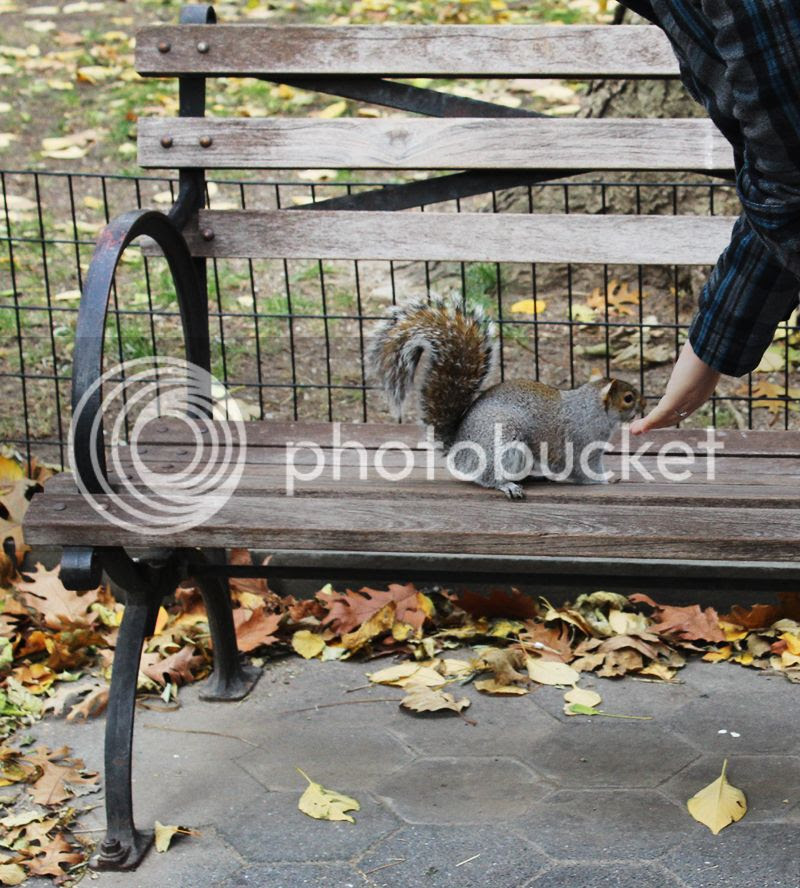 I don't know about the squirrels in your neighborhood but these squirrels are definitely packing the pounds! I saw some tourists hand feeding the squirrels and sneakily took a picture. As much as I would like to feed the little critters, as a child I was taught in school that squirrels have extremely sharp teeth. I would rather just watch them from afar and keep the tips of my fingers intact.

For the longest time I never found the Empire State Building to be attractive at all. The Chrysler Building is a lot easier on the eyes in my opinion. However, the Empire State in various colors is really breathtaking and definitely eye catching. The building was red, white and blue for awhile during and after the national election.

Although I try not to eat at the same restaurant too many times for fear of getting bored of the food, Bare Burger is a go-to for my friends and I. The prices are reasonable, service is always good and the food is delicious! The pesto red pepper burger is my favorite and it will probably be my burger of choice whenever I go to Bare Burger. 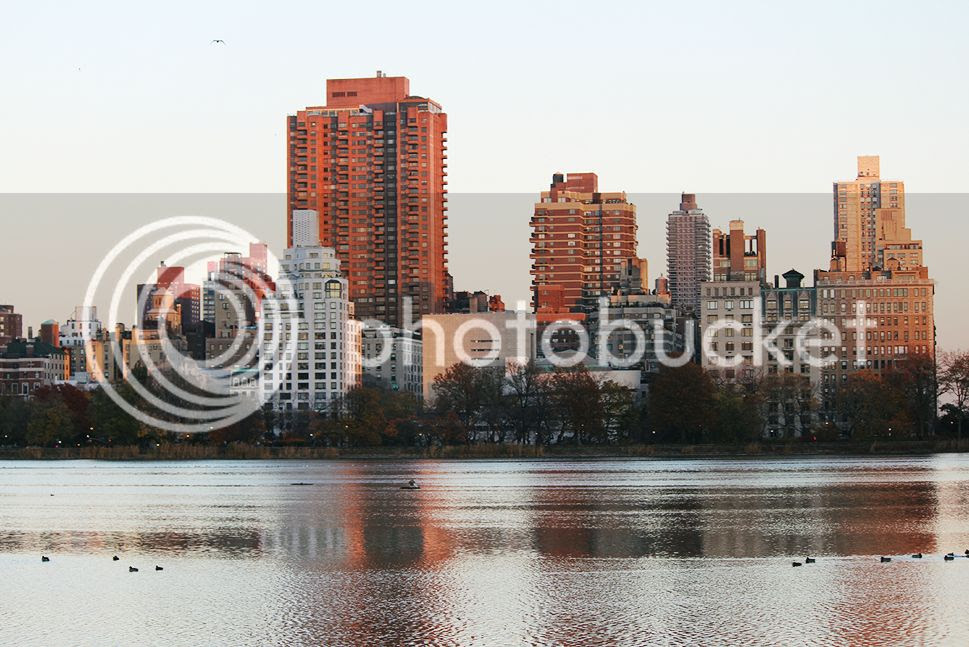 This November my boyfriend and I celebrated our third year anniversary and we took advantage of the brilliant weather by going to Central Park and having a mini photo-op session. Despite having lived in New York City pretty much my entire life, I have yet to explore every nook and cranny of Central Park and each time it feels like a new park. 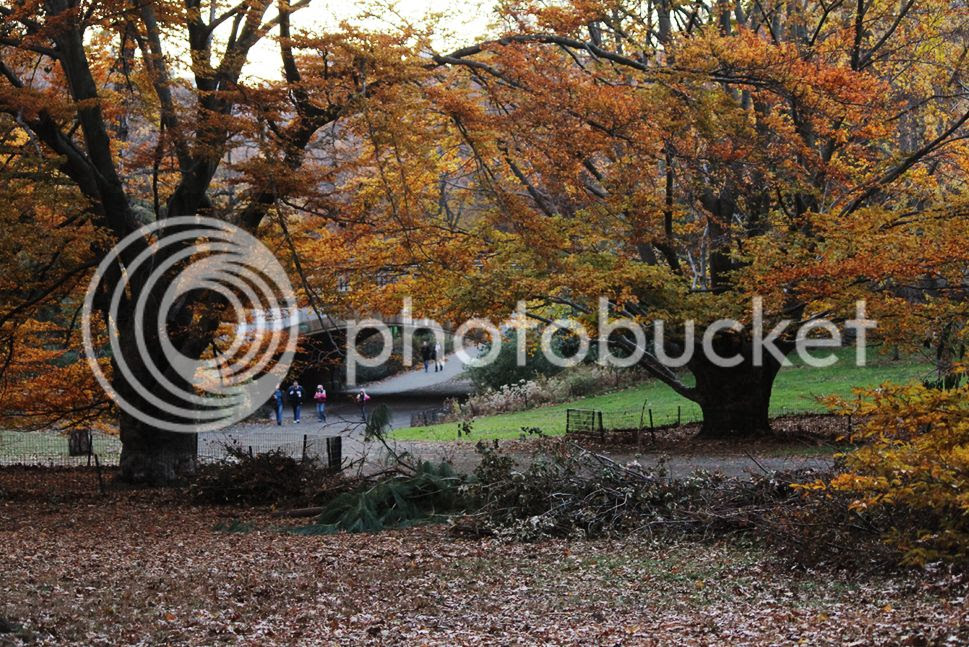 While there were a few downed trees, most of the large ones were intact and still as majestic as ever. Everyone who visits the city must spend a few hours walking about Central Park! After we walked around quite aimlessly, we worked up an appetite and headed to a Greek restaurant I found on Yelp.

Kefi, at 505 Columbus Avenue, is a two floor restaurant that fills up very quickly once dinner time is in high gear. We arrived somewhat early without a reservation and we were seated without a problem. Most of the patrons come in groups of four or more so the atmosphere is very festive and cheery. The decor is authentic and evokes a sense of intimacy between guests and food.

Above are the appetizers we chose, the kalamari and selection of spreads for two with pita. We always order kalamari no matter where we go and Kefi's was tasty but nothing amazing. The spreads were fun to try and come in (from top right clockwise) "caviar", yogurt, eggplant and chickpea. The flavors were mostly salty and slightly tangy which we both really liked. The pita was warm and soft, making for great finger food.

For our first entree we chose the sheep milk ravioli which was incredibly savory. The serving size is quite small but the creaminess of the filling makes the dish heavy and satisfying. I would highly recommend this dish and have read amazing things about the sheep milk dumplings as well.

For our second entree we chose the lamb chops over spinach rice which I had read quite a lot about on Yelp. For some reason this dish is not listed on their menu at all but the server should verbally suggest it when you are first seated. My boyfriend loves lamb while I am lukewarm to the very strong lamb taste. The porkchops are quite small but very tender and succulent. They were seasoned just right and cooked enough to give off a rich, smokey flavor. The spinach rice was creamy, buttery and had a subdued flavor that complemented the lamb.

We were both very happy with our dinner at Kefi and would gladly return. The prices are reasonable and our waiter was very polite and attentive (if anything, he was overly attentive and would check on us every 15 minutes). If you are in the Upper West Side area, I highly recommend a meal at Kefi.

Gobble gobble! Thanksgiving evening was spent at home as my parents always cook a huge meal for close relatives and family friends. This year my mom decided to serve mainly non-Asian food as we usually have a mix of Asian classics as well as American fare.

I feel quite bad to have not helped with anything but my Mom prefers that I stay out of the kitchen as she thinks I will only cause more trouble.... Oh well. The potatoes were especially delicious and I was so busy eating that it totally escaped me to take some shots of the other dishes.... Whoops.

Following the hearty Thanksgiving meal I slept in until almost 10 A.M the next morning. I rarely ever find good deals in stores during Black Friday and the whole day is more hype than actual savings. My boyfriend and I visited one of our favorite date spots, the Queens County Farm, instead. There were a lot of animals this time around including about a dozen goats, a dozen miniature horses (Lil' Sebastians! I hope at least one person gets this reference...), two alpacas and more. We then drove around Long Island a bit and randomly found a theater that was playing Wreck it Ralph. I am not a huge cartoon person (the boyfriend is a different story altogether) but I cannot remember the last time I laughed as much during a movie. I think I was laughing and smiling throughout 85% of the movie and the other 15% I was on the verge of tears or being scared. It's a great film for both kids and adults and I give it two big thumbs up!

Looking back, November was a really good month and I am very thankful for so many aspects of my life. I hope that my good fortune and positive outlook will continue throughout December so 2012 can be closed out on good terms. How was your month? What were some of your November highlights?
Labels: about me food Monthly Wrap Up