December 2012 Wrap Up, The Year in Review, & Looking Ahead 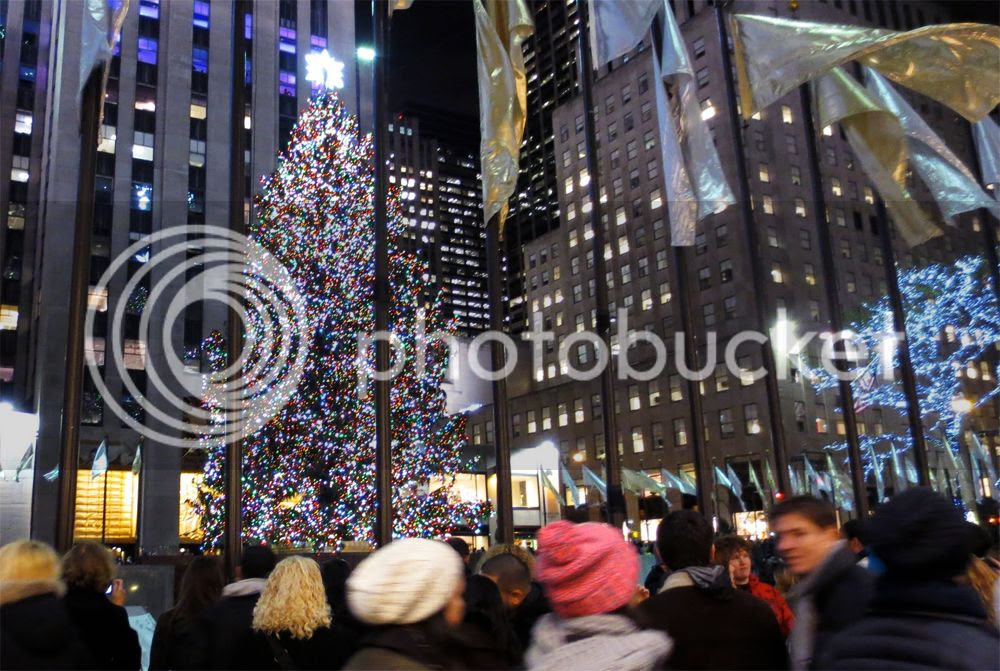 The month and year is drawing to a close and all in all, December was a great way to end 2012. A majority of the beginning of the month was occupied with school related thoughts but a few fun things here and there made it all bearable.

I met up with Julie for a super yummy hot pot lunch and then a day of shopping. I'm usually not a fan of hot pot outside of the comforts of my own home but this new place she brought me was super good! The soup base was really tasty and it was nice getting to know each other better over a steaming bowl of food.

I finally got around to replacing my point and shoot which had stopped working on me a few months ago. I settled on the Canon ELPH 110 HS because the price was decent and I had good experience with my old ELPH 300 HS. I originally wanted the light pink camera but after delaying my purchase for a few days it sold out and black was the only color left. To be honest I prefer the 300 over the 110 but the 300 is discontinued now. In the space between not having a point and shoot I've been so accustomed to using my phone (Instagram) instead that I forget to use my new toy at all....

One of my professors offered free tickets to see a production of John Steinbeck's Of Mice and Men and I gladly accepted the opportunity to watch a live show. I wish I made more of an effort to experience more theater and performances but my excuses often involve money or time restraints. The play was done very well and it definitely relieved some of the tension and stress from school and other deadlines.

If you read my December 2011 Wrap Up post, you might have remembered that I went to Z100's JingleBall Concert for my internship and highly enjoyed the experience. Although I moved onto a different internship, my old supervisor asked if I would like to work the show again and of course I said yes! The line up for this year was more up my alley and I feel very fortunate to have been able to help out again at the concert.

When I wasn't running around doing this or that I quickly snapped a few photos. Although I am by no means an avid fangirl, it was definitely exciting to see Taylor Swift in real life. I walked by her a few times and she is incredibly tall. I also walked by a few members of One Direction, Ed Sheeran (who has an amazing voice), Lindsay Lohan, and Alexa Chung. I'm not really one to get starstruck as it's not professional but it never hurts to see some celebrities up close. 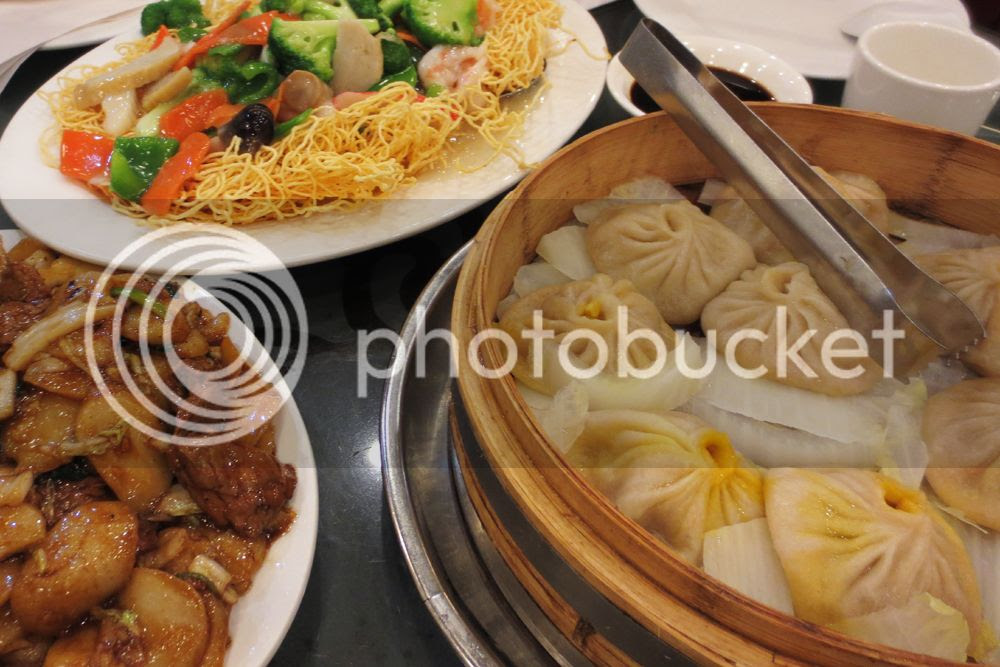 The weekend before my birthday, one of my best high school friends ate dinner with me at Joe's Shanghai. I was very thankful that she some time out of her busy week right before finals to spend some time with me. Joe's Shanghai is always packed whether it be for lunch or dinner as their xiao long bao (soup dumplings) are very popular. I really love their crab meat soup dumplings but the rest of their food is just average. I ate here a second time after Christmas with my boyfriend's family as well so I think I've had my fill of xiao long  bao for awhile!

My birthday was on the 12th, yup, 12/12/12! I turned 20 years old and honestly I thought it would be a pretty plain day since it was a Wednesday. I did my normal routine of going to class, interning and then heading home. My "cousins", who are actually childhood friends that I grew up with, surprised me at home and it really cheered me up. I was totally not expecting anything special to happen that day and it meant a lot to me that they took the trouble to make their way to my house to celebrate with me.

The next day I was surprised with a box of Sprinkles cupcakes from my internship which was another really amazing gift. It was my first time trying sprinkles and although there was too much icing for my liking, the cake was delicious! I can now declare Sprinkles trumps Magnolia and Crumbs!

After successfully completing various finals and end of semester presentations I finished my first semester of Junior year. College is really flying by (thankfully) and I cannot wait to graduate. While most people seem to celebrate the end of a term with parties, I'd much rather snuggle up with a good book and some hot chocolate. I much prefer hot chocolate over coffee or tea and I actually hate marshmallows in my drinks. The above photo is of my cousin's mug as I already drank my cocoa and ruined the photo opportunity.... 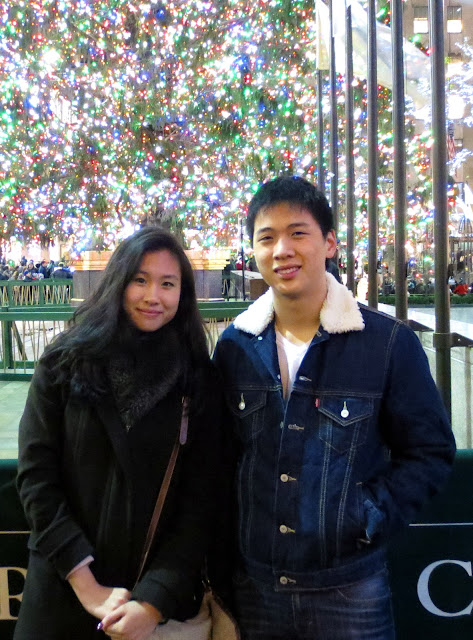 Amid all of the pre-holiday errands, I convinced my boyfriend to be a tourist with me and visit the Rockefeller Center christmas tree. The plaza was less chaotic than I had imagined but the tree was over decorated in my opinion. The multi-colored lights made the whole thing look a bit garish but the mood was definitely festive. The photo above was taken with my new point and shoot and the quality is abysmal for some reason. Clearly I need to tinker around with the settings a bit more.

Finally, the holiday that everybody looks forward to came around. Every year Christmas is about the same for me, consisting of two separate family get-togethers on Christmas Eve and Christmas Day. There's nothing more to ask for as long as you're surrounded by good company and tasty food!

I received a few Starbucks giftcards for Christmas so I finally took the plunge and tried the pumpkin spice latte which everybody raves about. I normally avoid Starbucks because it's expensive and I don't drink coffee. The pumpkin spice was tasty but a bit rich for my liking so I might try it with fat free milk and without the whipped cream as per Julie's recommendation. Perhaps ordering some new drinks out of my normal comfort zone will lead to finding a favorite from Starbucks!

I chose not to take many photos during all the meals and festivities leading up to and following Christmas as I just wanted to keep some memories to myself. There are many things in my life that do not appear on the blog for various reasons and I think that's something I've wrestled with for awhile. I want to maintain a level of privacy but I also want to be honest and have a casual place to share my thoughts with whoever chances upon this blog.

Looking back on 2012, my mood and outlook on life fluctuated quite a bit throughout the year. I finally came to realize how my anxious, Type A personality was negatively affecting myself as a person and my relationships. I struggle constantly with unreasonable worries and I have heard time and time again that I need to calm down. I would like to think I have improved somewhat in the past few months but I will continue to seek a middle path that will allow me to be motivated and driven without being overly tense and hostile in the upcoming year.

Health-wise, I want to improve my stamina, strength and flexibility. I have been doing some basic yoga poses every morning for the past week or so and I intend to continue this routine into 2013. I want to try new foods and vary my meals so that I don't get bored with rotating the same few choices everyday. I don't have any diets or weight targets in mind because my goal is a long term, lifestyle change rather than a temporary spurt of productivity.

In general, I hope to be a healthier person in terms of both body and mind. Having one without the other will still leave a lot to be desired. Exciting things are to come in 2013 and my blog will reflect many of the life changes that will happen. For one, this is the last monthly wrap up post that I will be doing for at least a few months. Instead of giving you all a cursory run down of things I've seen, eaten and done throughout the month, I will be doing more frequent posts about my happenings. I hope that I can consistently blog in the next year and that you readers will like the outcome!
Labels: about me Monthly Wrap Up