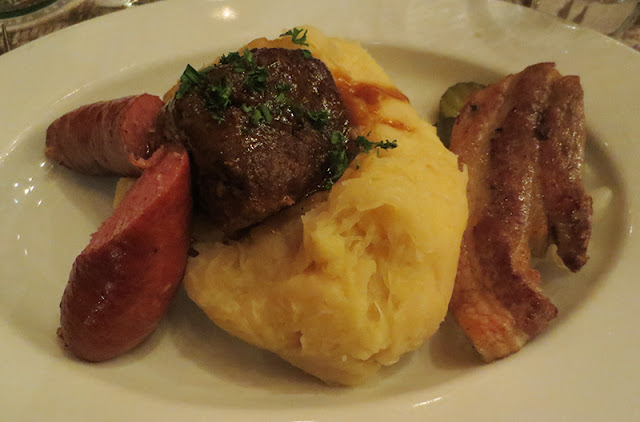 A month has already flown by and I have no idea where the time has gone. Blogging has surprisingly taking a back seat between exploring the city, preparing for classes, and skyping with friends from home. Generally, I'm taking this opportunity to live more in the moment and if I slack in uploading pictures for a few weeks, so be it. Although I cook roughly 85% of my meals at home, the foods I have tried so far have been pretty darn delicious and here's a look at some of what I've nommed so far!

Above is what I ate for my first Dutch meal at Haesje Claes, a cozy restaurant located in Central that made me feel like I was dining in the early 20th century. I loved the atmosphere of the restaurant from the china in the glass cupboards to the various dining rooms that each had its own flair. For my main dish I had the sauerkraut stampotten with meatball, sausage and bacon. Stampotten was essentially mashed potatoes with sauerkraut added in. It was my first time having either and while it complemented the meat well, it became too sour after a few bites of eating it alone. The sausage was my favorite meat in the dish but the meatball and bacon were tasty as well. The prices at Haesje Claes were reasonable and I think it's worth a visit if you're visiting Amsterdam. 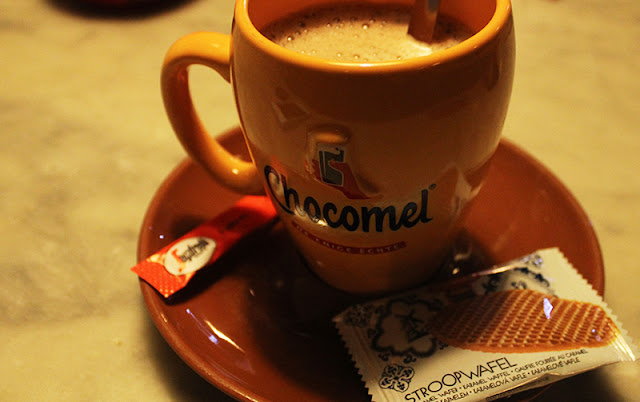 To my dismay, few restaurants serve iced tap water in Amsterdam. Being accustomed to getting free water and not having to order a drink, I had to set out and find a replacement. Hot chocolate is one of my go-to drinks on cold days so naturally, Chocomel is one of my new favorite discoveries. Everytime I have asked for hot chocolate, I have been served Chocomel which is fine by me. 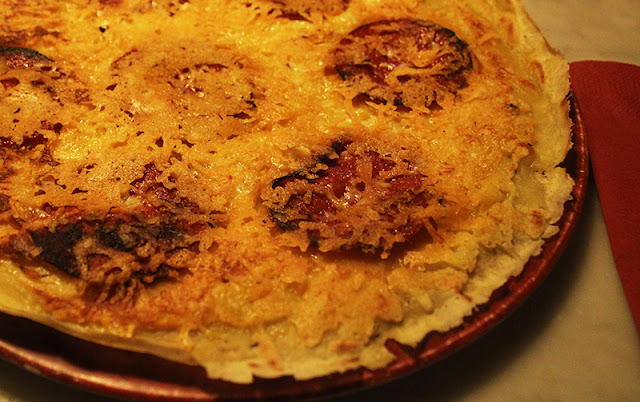 I yelped high and low for eateries with traditional Dutch fare but surprisingly there do not seem to be many. According to a local, the Dutch prefer to eat foods from different cultures as opposed to their own. I suppose that makes some sense. The Pancake Bakery on Prinsengracht is a very popular restaurant that specializes in making delicious Dutch pancakes. Unlike American pancakes which are fluffy and usually smaller in size, Dutch pancakes are thinner and almost crepe-like. They come in sweet or savory flavors usually. A few days before my visit to The Pancake Bakery I had a nutella pancake at Efteling, a theme park in the Netherlands, and realized sweet on sweet was too much for me to handle. I opted for the cheese and chorizo pancake at The Pancake Bakery and it was delish! 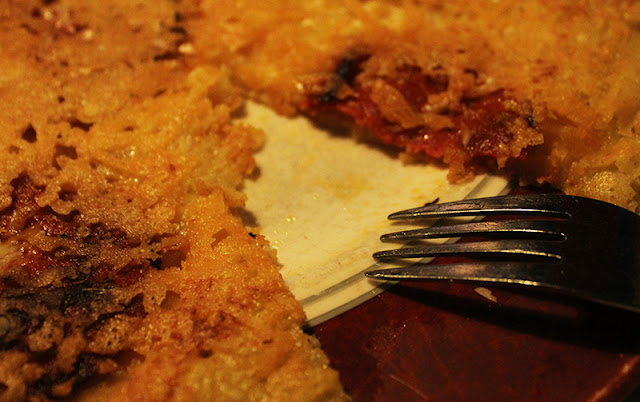 The cheese gave a great texture to the pancake and the chorizo added a nice flavor. I finished about five sixths of the pancake which had me stuffed. I am so tempted to go back a few more times to sample more options from their extensive menu but I will probably force myself to try a few more pancake houses before claiming this as my favorite. 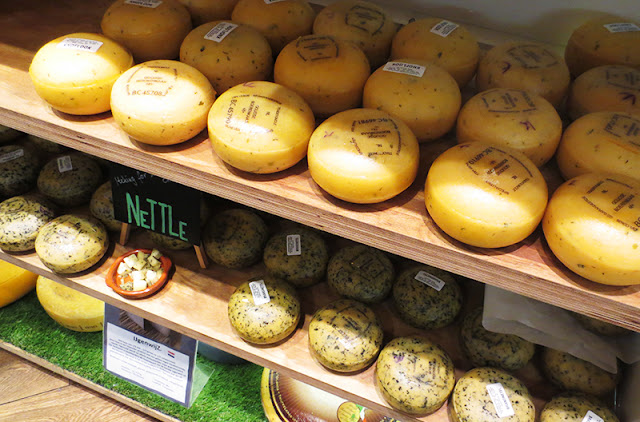 Cheese is big in the Netherlands and cheese specialty shops are common in city center. It's great how the shops usually have samples of various cheeses so you can try a bit before you buy. 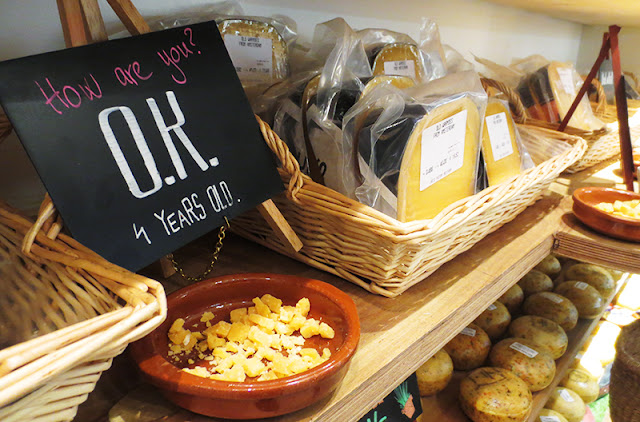 So far I've been quite lazy and have opted for buying sliced gouda cheese from the supermarkets but soon I know I must make an effort to try some specialty cheese. 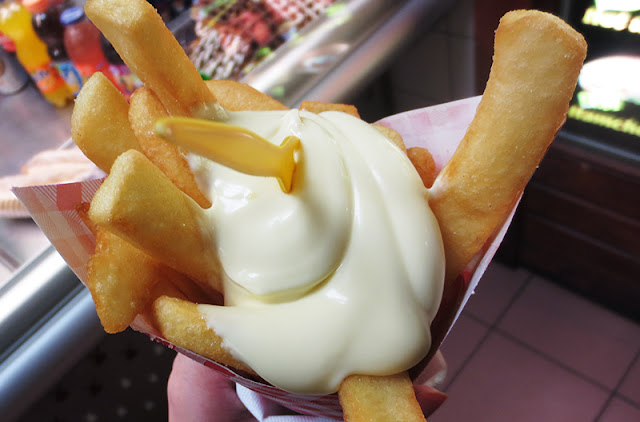 I can't end this post without including some Amsterdam snackage! Vlamse frites are one of the most popular fast food snacks here and I love mine with mayonaise. These were some I bought in the Red Light District but I have my eye on Manneken Pis and Vlaams Friteshuis Vleminckx which supposedly have the best fries in town. 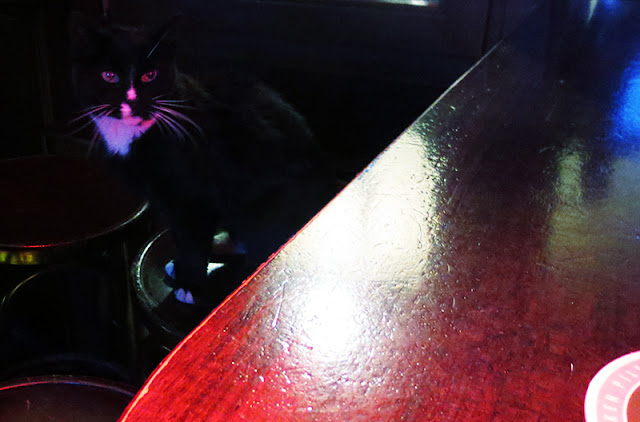 I'll end this short post with a photo of a little cat friend who I met at a bar. I was just sitting on a stool minding my own business when this fella jumps up on the stool beside me and rubs his face on the sleeve of my coat. Between being wary of fleas and being overwhelmed by cuteness I had to give him a few head scratches before leaving. Bar cats are very common here and even a few restaurants have them. I'm a huge cat person but it can be alarming when a cat pounces on your table and sniffs the food on your plate as you're eating.

What Dutch (or European) foods do I have to try while I'm here? I'm always looking for new suggestions of what to do and where to go!
Labels: Amsterdam food