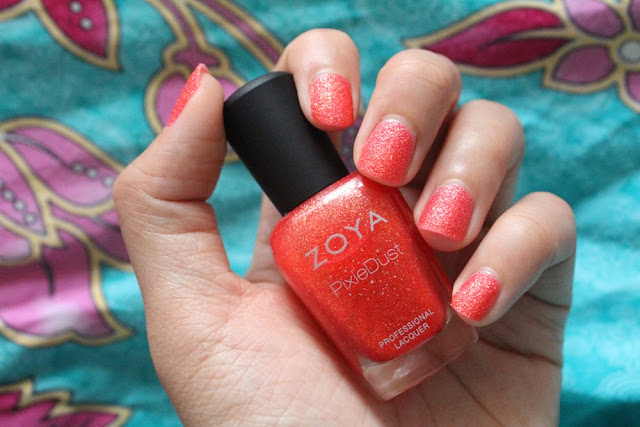 Zoya was kind enough to send me a few of their recent collections but they arrived while I was still studying abroad so I only recently was able to test them. Since summer is in full effect, I wanted to try one of the PixieDust Summer 2013 releases first. My eyes gravitated toward Destiny, a lovely bright coral with amazing gold sparkle.

The innovative PixieDust formula features a matte colored base loaded with sparkles to create a "sugary finish". Zoya advises the polish be used without a base coat or top coat, something I was wary about at first but came to appreciate as it saves time. I needed three coats to achieve an opaque look with Destiny although some people with not so stark nail tips can be covered in two. Once dry, the polish has a bumpy feel that is noticeable but not rough or harsh. 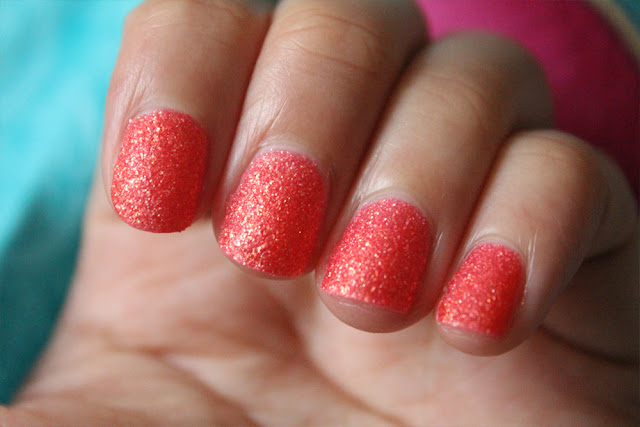 I wasn't expecting to like Destiny and the whole PixieDust idea as much as I do. From online swatches to seeing what competing nail polish makers were putting out, the polishes looked gritty and unattractive. However, in real life, the PixieDust formula catches the light wonderfully and makes it look like I painted my nails with druzy. It looks really unique but is totally wearable for everyday.

The lasting power was so-so as I got minor tip wear on my pointer and middle fingers on the third day after application. Minor chipping on these fingers occurred the next day. Five days later and chipping only affected those two nails on both hands while the rest stayed intact. I was scared that removal would be akin to removing a chunky glitter polish but it wasn't the case at all! The polish came off easily and did not leave any staining.

I was pleasantly surprised by the Zoya PixieDust formula in terms of the finish and feel of the polish. Destiny is a beautiful bright coral shade that will be a summer staple in my collection. Have you tried the textured nail trend?
Labels: nail Zoya