An Escape From the City: Tarrytown and Sleepy Hollow 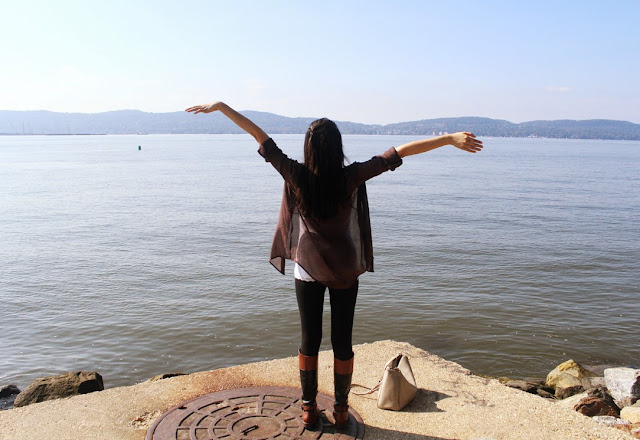 As much as I love living in New York City and feel lucky to be born and raised in a place full of opportunities waiting to be unlocked, I need a breather from the harsh environment every now and again. After hopping around a few international cities throughout the past year, I now want to refocus and discover the amazing views, communities and food that can be found in the rest of the state of New York and the surrounding United States.

With a bit of online searching and Google mapping, I figured out a relaxed itinerary for Saturday afternoon. My boyfriend drove us to Tarrytown and it took about an hour from my home in Queens. The drive was incredibly easy and actually a short distance from where we went to high school. Two tolls each way totaled $17.50 altogether which stung a bit but I'd say it was worth the cost. Those living in the city who don't have cars can easily get to Tarrytown and various Hudson River Valley towns via the Metro North railroad. 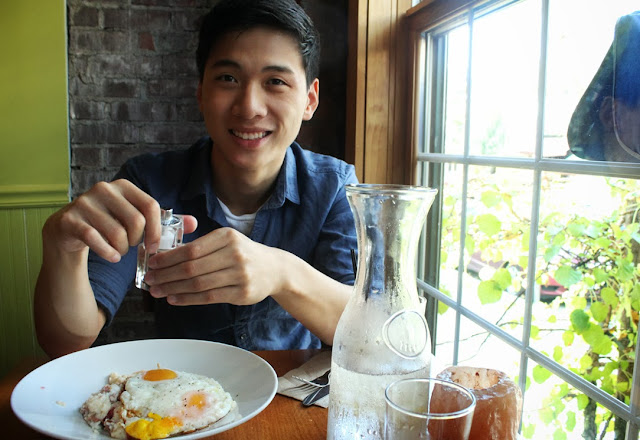 We started off our afternoon by having brunch at Sweet Grass Grill on Main Street. Sweet Grass prides itself in serving local and seasonal foods and just about everything on the menu sounds delicious. A lot of the dishes were remixes of classic favorites with a variety of options for vegans. The homey decor and polite servers were icing on the cake. Dennis ordered the Farmer's Breakfast Bowl which consisted of grits with chorizo, cheese and roasted pepper topped with a fried egg. I had a bite and the chorizo added such a nice smoky flavor to the creamy grits. 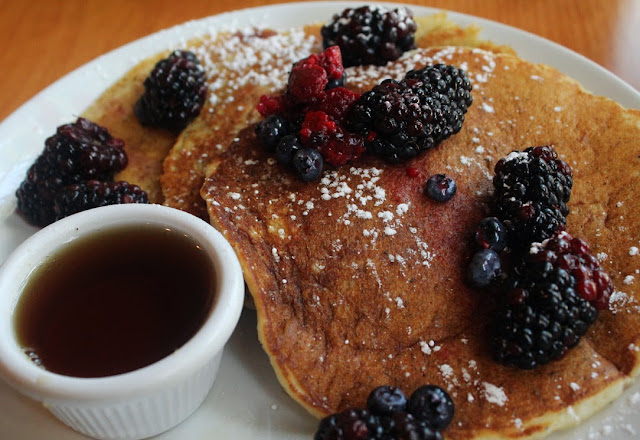 I always crave carbs so I was deciding between the pancakes or french toast. I'm more of a pancakes gal at heart so I went with that option even though the menu didn't provide much detail as to what the pancakes were made of. I am so glad I went with the pancakes because they were amazing. They were hands down the best pancakes I have ever had in my life. The syrup was also delicious and the fruit was fresh. I finished all three pancakes (more like two and a half because Dennis ate some) and could not have been more at peace after that meal.

Originally I had planned to eat at Sweet Grass Grill for dinner (we ended up eating at a Peruvian place back at home) and I would gladly make the trip back up just to dine there again. The price was also below Manhattan averages as my pancakes were a mere $10 and Dennis' dish was $12. So. Worth. It. 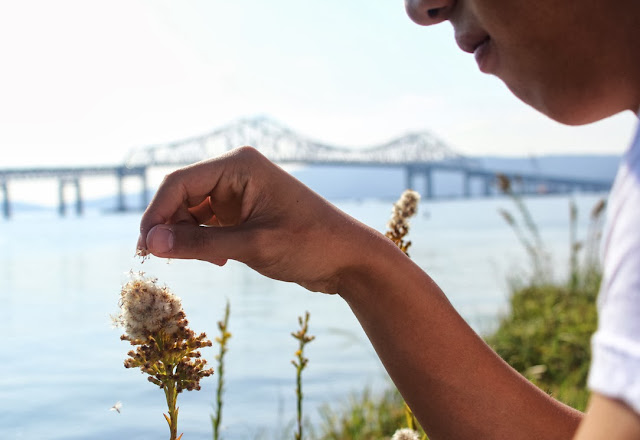 We walked about Main Street a bit and decided to head over to Hudson River to walk off our filling lunch. The weather has been unusually hot for this time of year and the sun was searing to the point of it being too nice. There's a nice little walkway with various shrubs and plants that line the banks facing the Tappan Zee Bridge. We spent some time sitting on a rock by the water, people watching and soaking up the last few rays of sun. 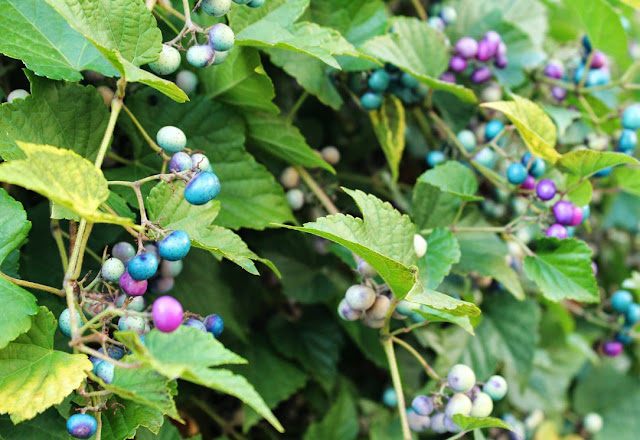 After it became unbearably hot in the sun, we trekked back uphill to Main Street and came across some more interesting plants. I've never seen berries in such vibrant shades of teal and purple before! 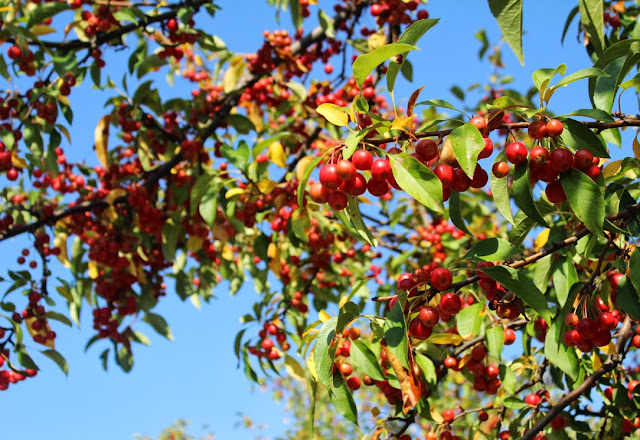 The crab apples were a gorgeous, vibrant red and brought out the healthy green tones of the leaves. Also, could the sky in the background be anymore perfect? 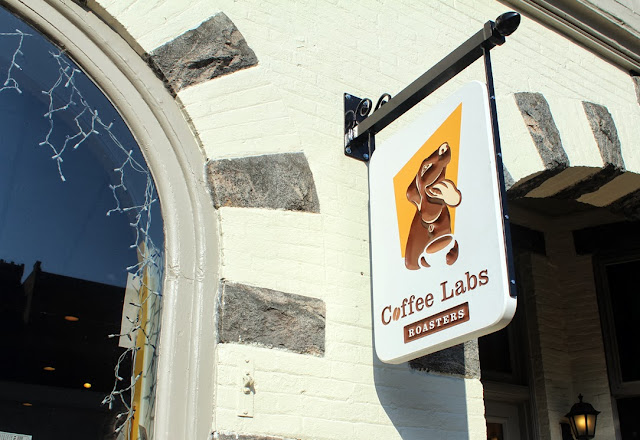 To cool off from our little walk, we headed to Coffee Labs Roasters, a popular coffee place across the street from Sweet Grass Grill. The owners of the coffee shop have three labradors (not at the coffee shop) and dog friends are welcome! 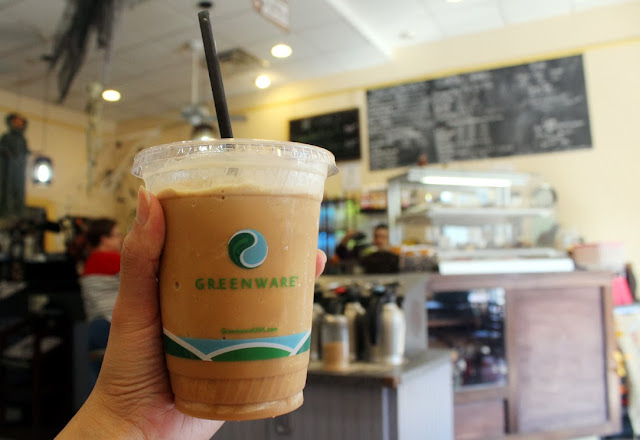 I'm not typically a coffee drinker because I can't take the bitterness and don't want to become hooked on caffeine but Dennis drinks a cup everyday. To suit my taste buds he chose the build-your-own caramel frozen drink which was the perfect amount of sweetness. I couldn't stop hogging the cup because it was really tasty and refreshing.

As someone usually surrounded by corporate owned shops and restaurants, it was so refreshing to see a truly indie establishment that felt authentic. Coffee Labs had a bunch of Halloween decor already as it's a big holiday in the area and even the bathroom was an interesting experience because they have press clippings framed up on the wall. It's really inspiring to see small businesses that people have worked hard to build and nurture. 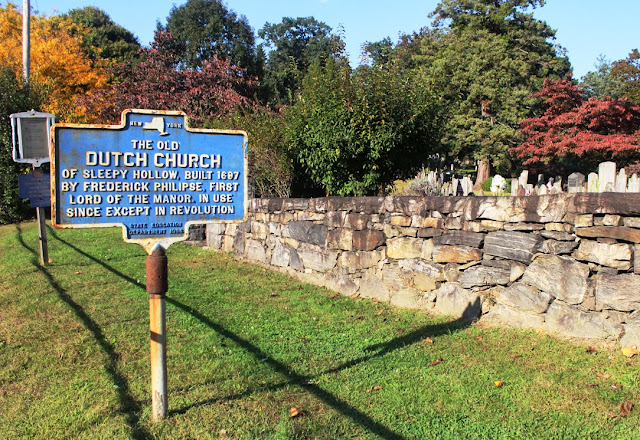 After catching our breath at Coffee Labs, we drove to Sleepy Hollow to visit the Old Dutch Church and Cemetary, one of the oldest in the country. The town was settled by the Dutch in 1640, something I can't quite wrap my head around. 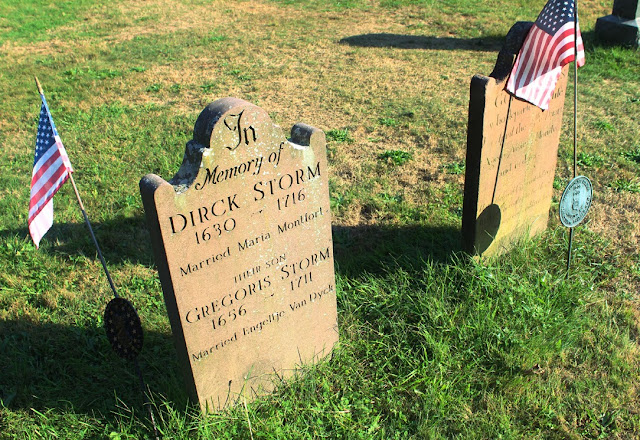 It's incredibly how old a lot of the tombstones are and that most are still in very good shape and legible. There were many American Revolution veterans and many of the original town farmers are buried in the neighborhood. The graves were marked with dates ranging from the 17th century to present day which surprised me. We only had about 20 minutes to browse the grounds before the cemetery closed for the day so I wish we could have gone further in. 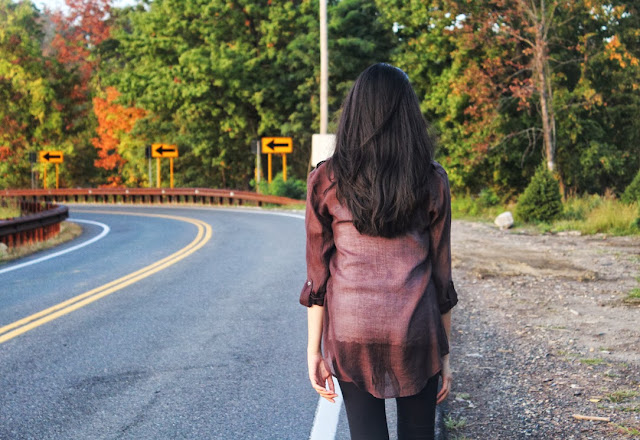 As the sun dipped under the rolling hills on the West, we drove back down to the Tarrytown Lakes Park and explored a bit on foot. In a few weeks, the trees will definitely be more orange and red but the view was spectacular nonetheless. 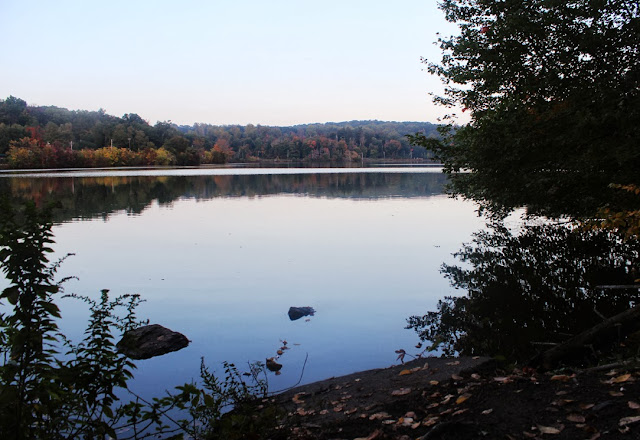 A tranquil afternoon spent in two lovely neighboring towns with my best friend was just what I needed to refuel me for the beginning of a new week. I can't wait to go back and explore more of the Hudson River Valley as this was only the very tip of the region. Bear Mountain, a little further up and on the other side of the river, is probably my next destination as I've been there previously but haven't really explored the place as much as I would like.

Where do you go to unwind? Do you prefer travelling locally or across great distances?

Labels: about me food travel