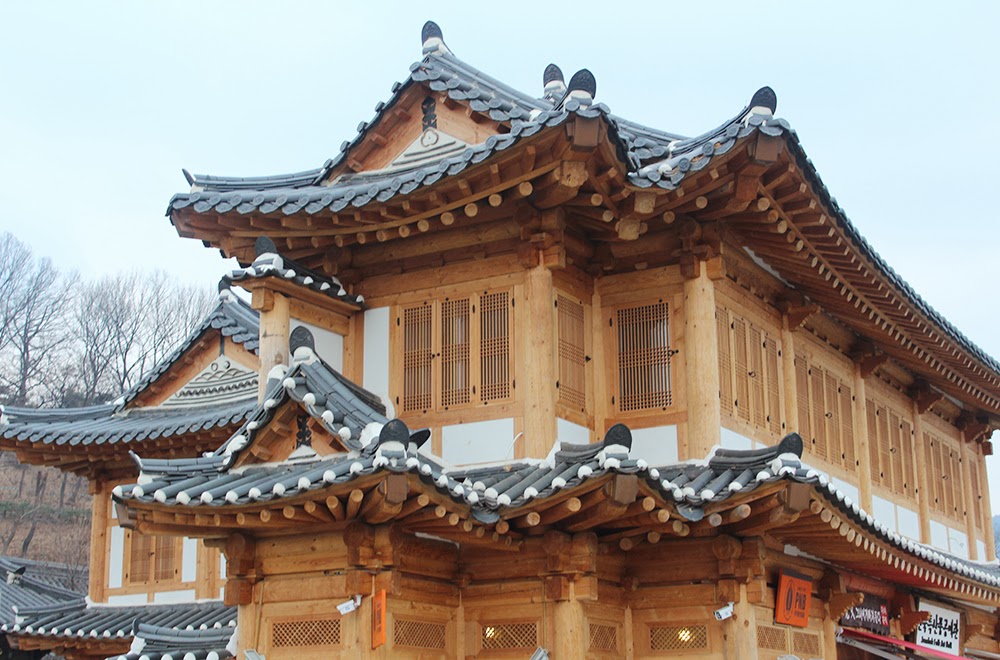 One of the main reasons I went to South Korea was to visit my friend who is teaching English in Jeonju, a city south of Seoul by about three hours driving. Jeonju is famous for its traditional Hanok buildings and food. The cultural part of the city is very adorable and it's a nice fusion of traditional and modern elements. This is a really place to purchase souvenirs or home decor if you like Asian inspired art. The Hanok village is a really cute place to visit if you have a lot of time in South Korea. It seems especially popular with young couples and families with small children. My friends and I visited a pottery shop and made our own clay mugs and tea cups. 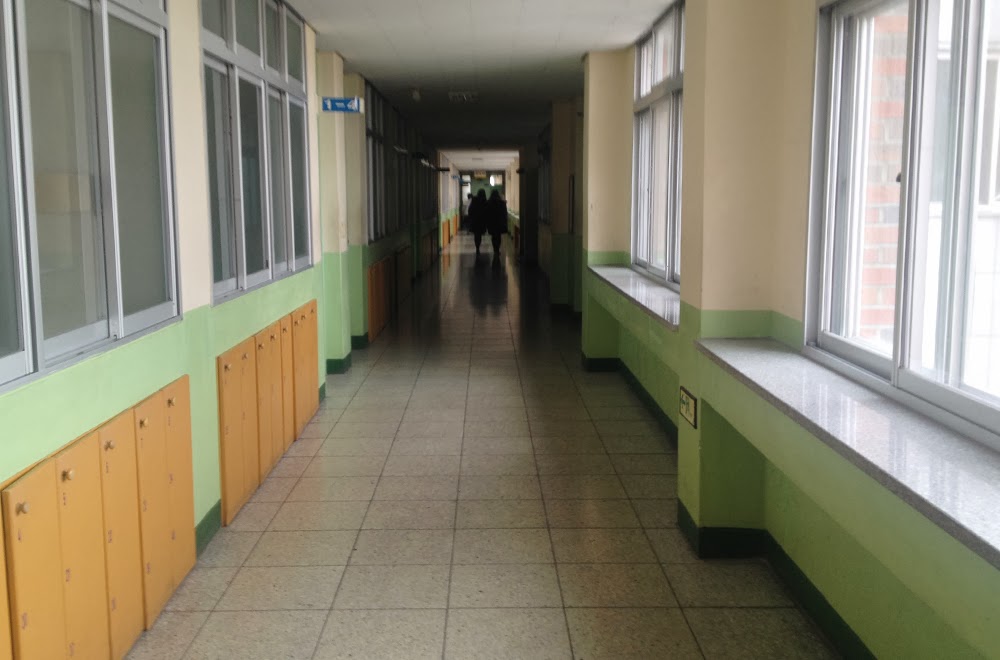 I think the highlight of the entire two week trip was visiting the all girls high school that my friend teaches at. Before visiting the students, the principal, vice principal and a few other important staff members of the school brought us out to a traditional bibimbap lunch. I wish I had taken photos of the bibimbap but it was absolutely delicious with raw beef, ginseng, mushrooms, and various vegetables over rice. There were also lots of tasty side dishes such as kimchi pancake and various kinds of pickled veggies. 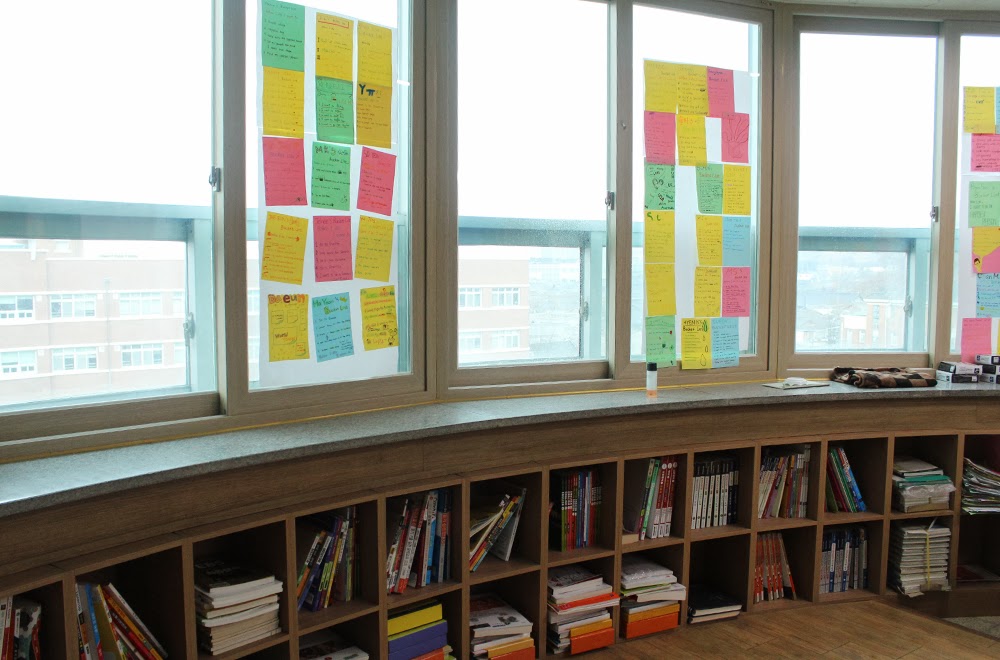 After the meal we headed back to the school where the hallways looked exactly like those in Asian dramas. There was no heat in the hallways and you have to take off your shoes and change into slippers. We visited a few classrooms where we were greeted by many enthusiastic teenagers. They were incredibly welcoming and so funny, trying to communicate with the English they had been learning. This was definitely a once in a lifetime experience and something that was authentic. I am so thankful to my friend for showing us around and giving us the opportunity to visit her students. 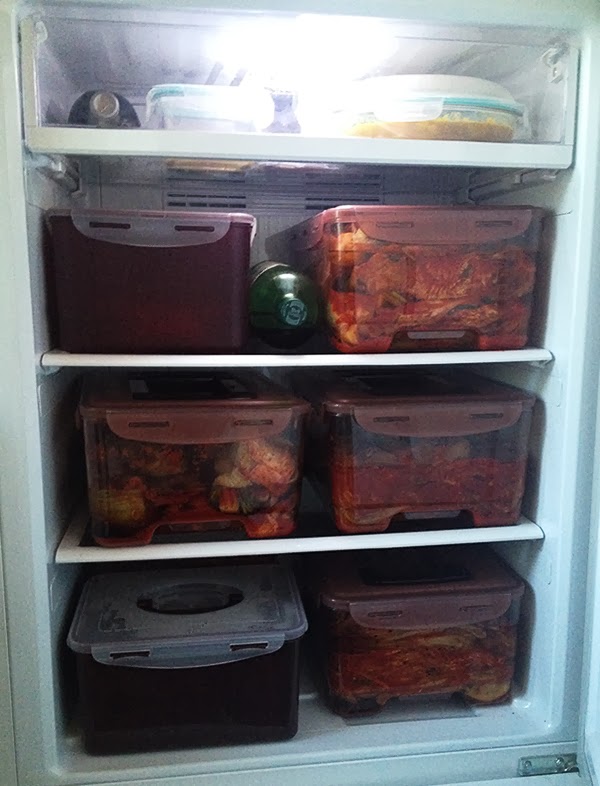 For the most part, we chilled in Jeonju because we lived with my friend's homestay family instead of at a guesthouse. We got to see what a real Korean apartment looks like and the family treated us very well. They have two fridges and one is entirely devoted to kimchi! Some other interesting things about Korean living is that they separate food waste from regular garbage so any leftovers have to be thrown out separately. I kept forgetting this and realized I was being very wasteful if I couldn't eat everything on my plate. Another thing was that the heat comes from the floor so it is very common to sit on the ground to warm up. It was kind of annoying sometimes because I would forget and leave my makeup on the floor, then freak out when I realized my lipsticks might be melting.... 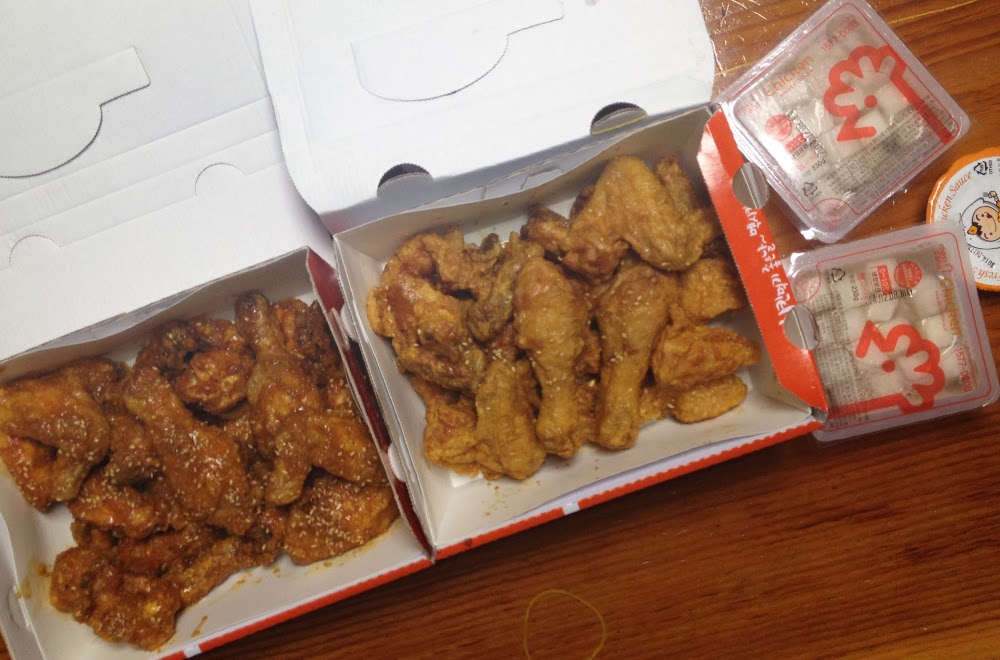 Korean people love to eat chicken so we ordered in chicken for dinner one night as it was too cold to go out. We sat eating delicious fried chicken while watching new music videos on television. I have to admit I think k-pop is getting weirder and weirder to me even though I loved it years ago. Rain made a comeback at the beginning of 2014 with "30 Sexy" which I'm really liking so check that out if you're curious. 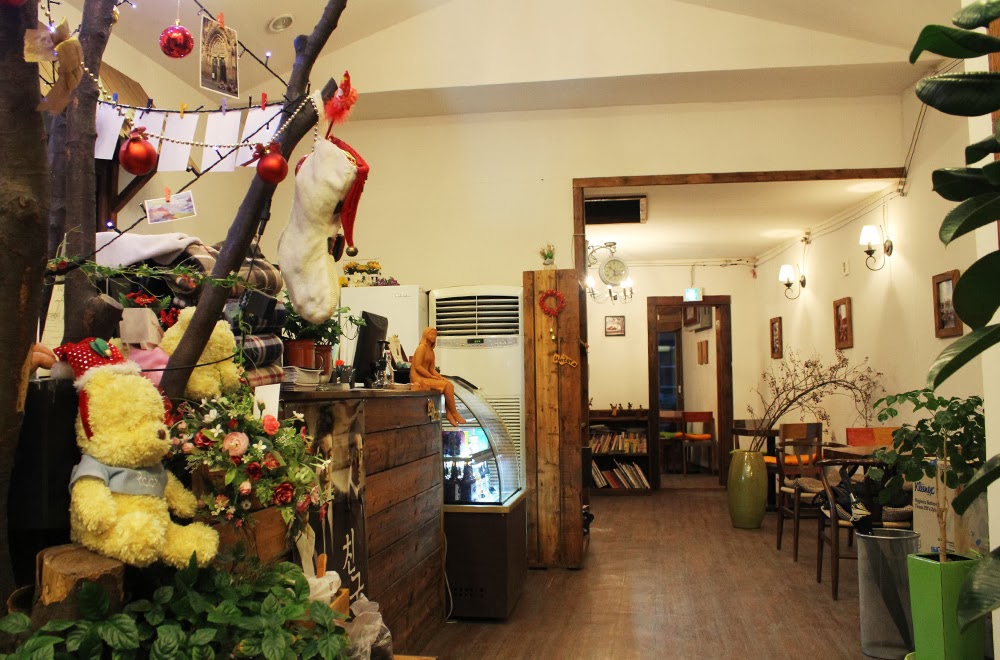 Due to the cold weather, we needed to find shelter at a cafe every once in awhile during our exploring. We went to the cafe owned by Kim Woo Bin's family. Apparently Kim Woo Bin is a popular actor and he's one of the leads in "Chingu 2". The poster for the movie is taped to the register table which you can kind of see from the picture above and I saw the poster quite frequently throughout Korea. The cafe itself was very cozy and cute, really great for a date with friends or your significant other. 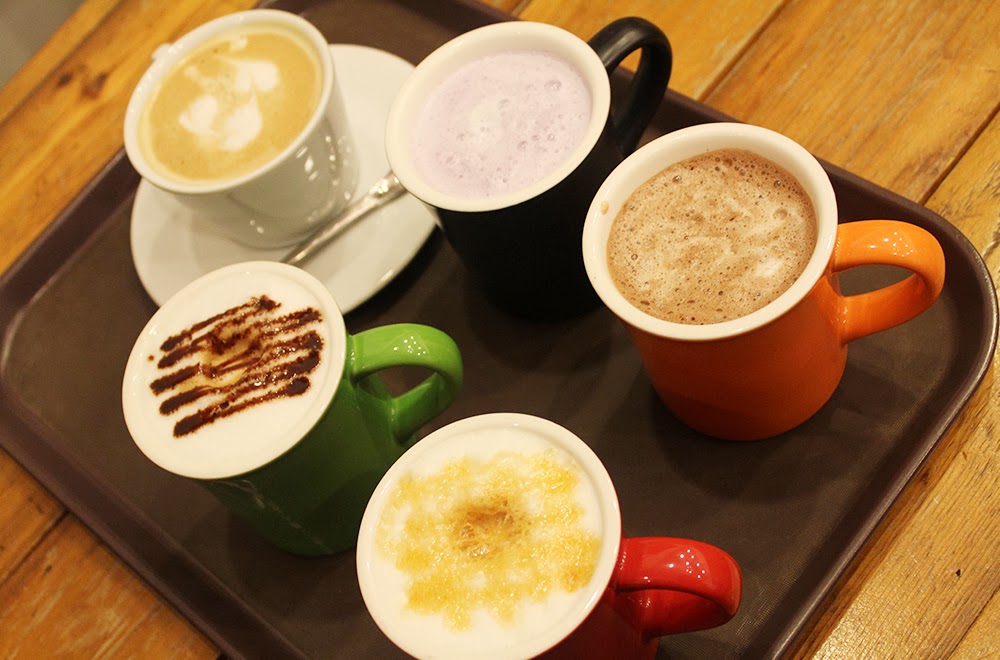 I think I got a caramel latte but I honestly can't be too certain. It was warm and just what I needed to defrost so that's all that matters. It's funny how I rarely drink coffee or indulge in overpriced drinks in New York but have little problem justifying the treats when I'm abroad. 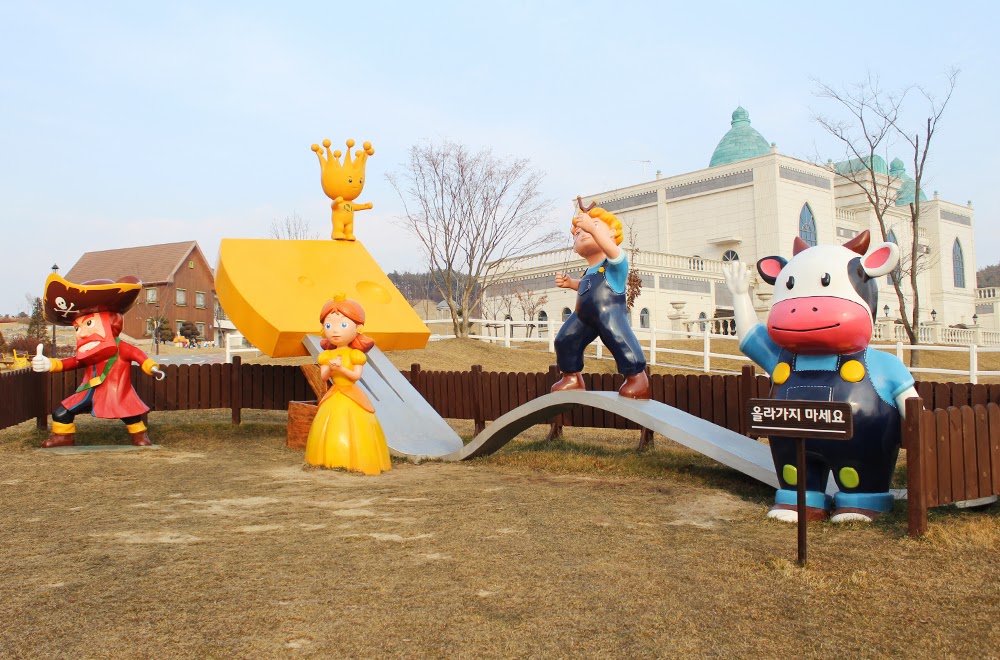 A popular day trip from Jeonju is to the Imsil Cheese Village which is about an hour away by bus. But you have to transfer and take two buses to get there and the man selling the tickets for the second bus said we would be bored at the village so he suggested the Imsil Cheese Theme Park.... He hailed us a cab and it took us directly to the little "theme park". I can imagine this being a place elementary and middle school children go on trips because you can do workshops such as make cheese and design your own pizza. But we missed all the morning workshops and there wasn't much going on. 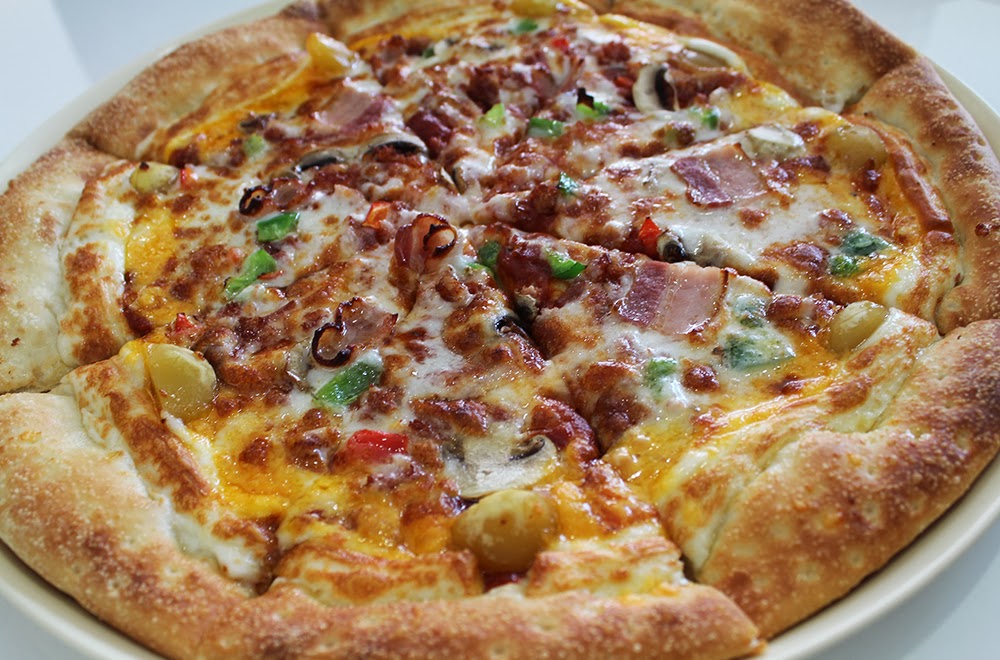 We had a pizza made with a few kinds of cheese which was quite good but overpriced and nothing spectacular. I guess for Korean people it would be quite nice but as a New Yorker, I've definitely had better. Still, I enjoyed the pizza and made for a nice Western lunch. I would not recommend going to the Imsil Cheese Theme Park though, especially if you do not have young children. 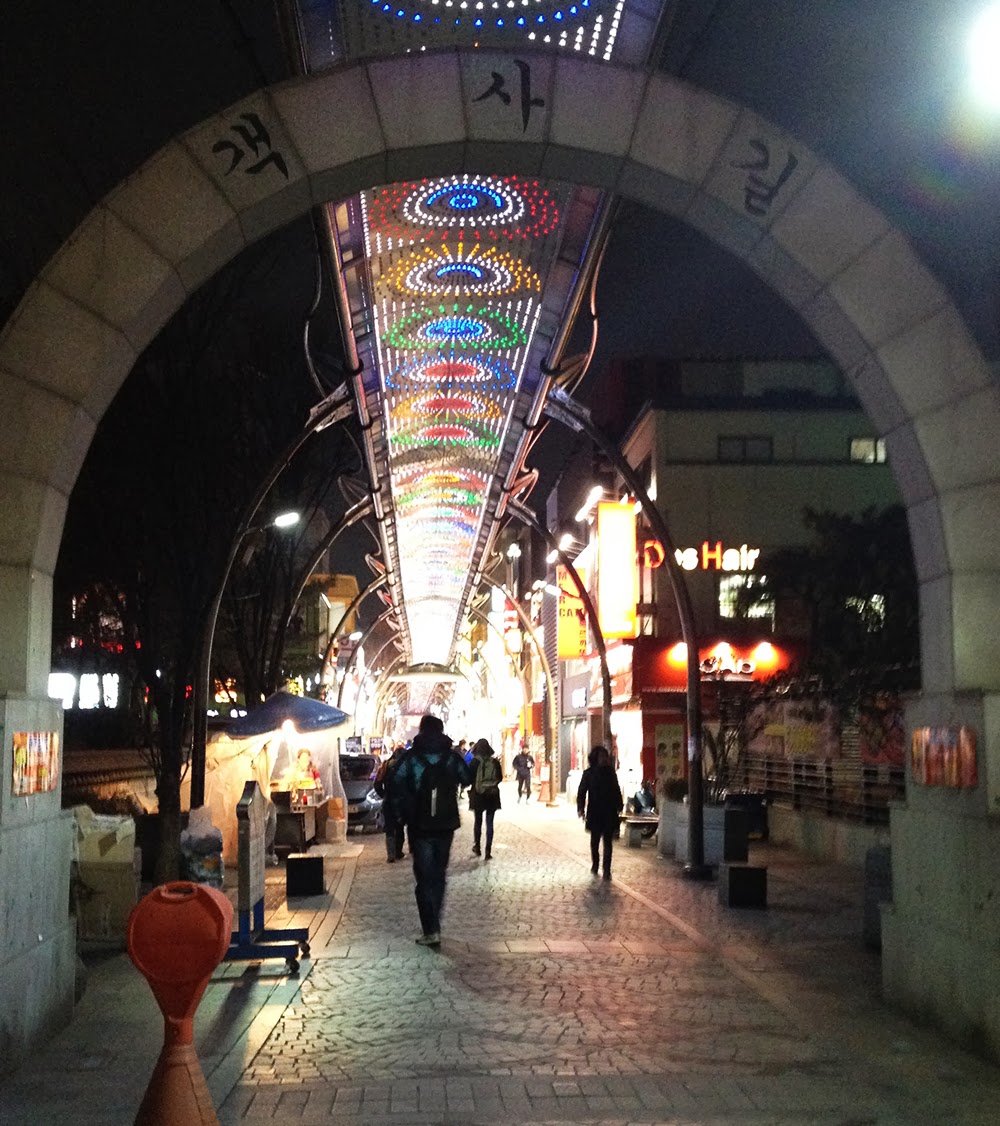 I didn't take many pictures when I was in Jeonju because I was genuinely having a good time with my friends. Sometimes it's easy to get caught up in the life within the screen of your phone or the camera lens but I prefer living in the moment and trying to savor the memories in my head. I'll leave you with a picture of one of the more commercial areas of Jeonju which is reminiscent of Seoul. Stay tuned for the fourth and final post where I take you back to Seoul to show you a few more awesome eats and some cool landmarks that shouldn't be missed!
Labels: food travel