Holiday in Hawaii 2014 Part 2: Falling in Love with Kauai 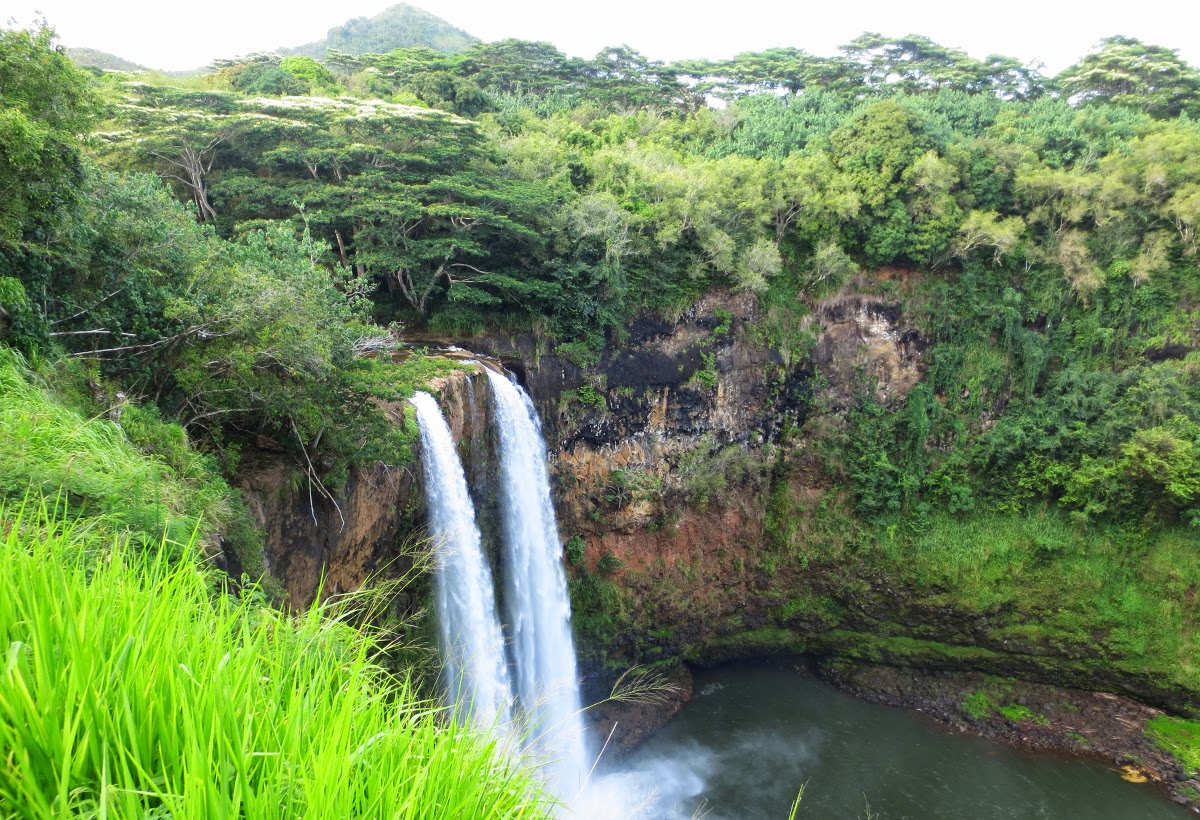 We only spent three full days in Kauai but it only takes a few hours of driving down Kuhio Highway, which is actually more or less a two lane road, to fall in love. The drive up to Wailua Falls gives you a glimpse into the agricultural valleys and untouched wilderness of Kauai. The waterfall lookout point is at the very tip of the road and the natural beauty of its surroundings is simply astounding. I particularly liked the skinny trees with canopies that flatten out right above the falls on the left side of the photo. 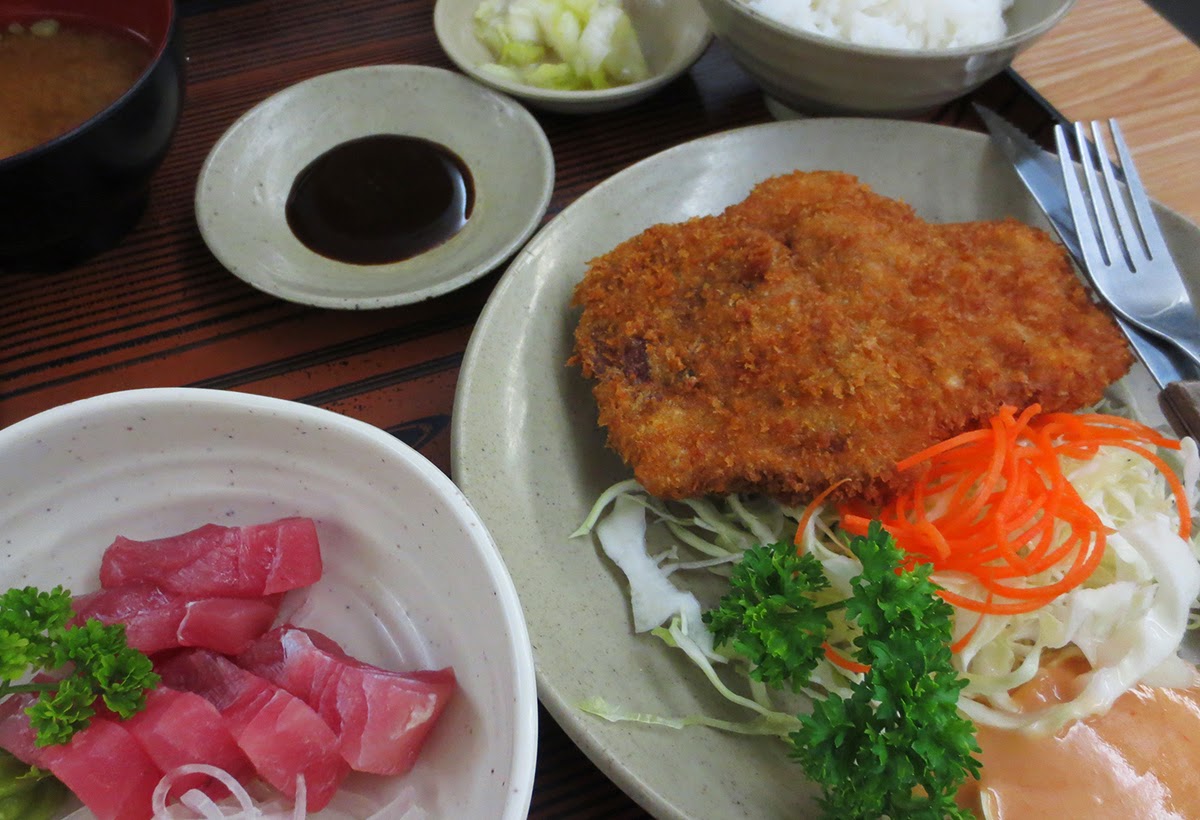 We drove back down to Lihue at sunset and had dinner at Kiibo, a quaint Japanese restaurant that doesn't feature any sushi but focuses on traditional Japanese meals instead. I had the pork katsu and it was probably the most delicious katsu I have ever had the pleasure of eating. The fried coating was not greasy but perfectly crisp and the pork was flavorful and surprisingly moist. Dennis had the pork sukiyaki which he thoroughly enjoyed as well. There were mostly locals eating here so it's a great find for those looking to avoid tourists. 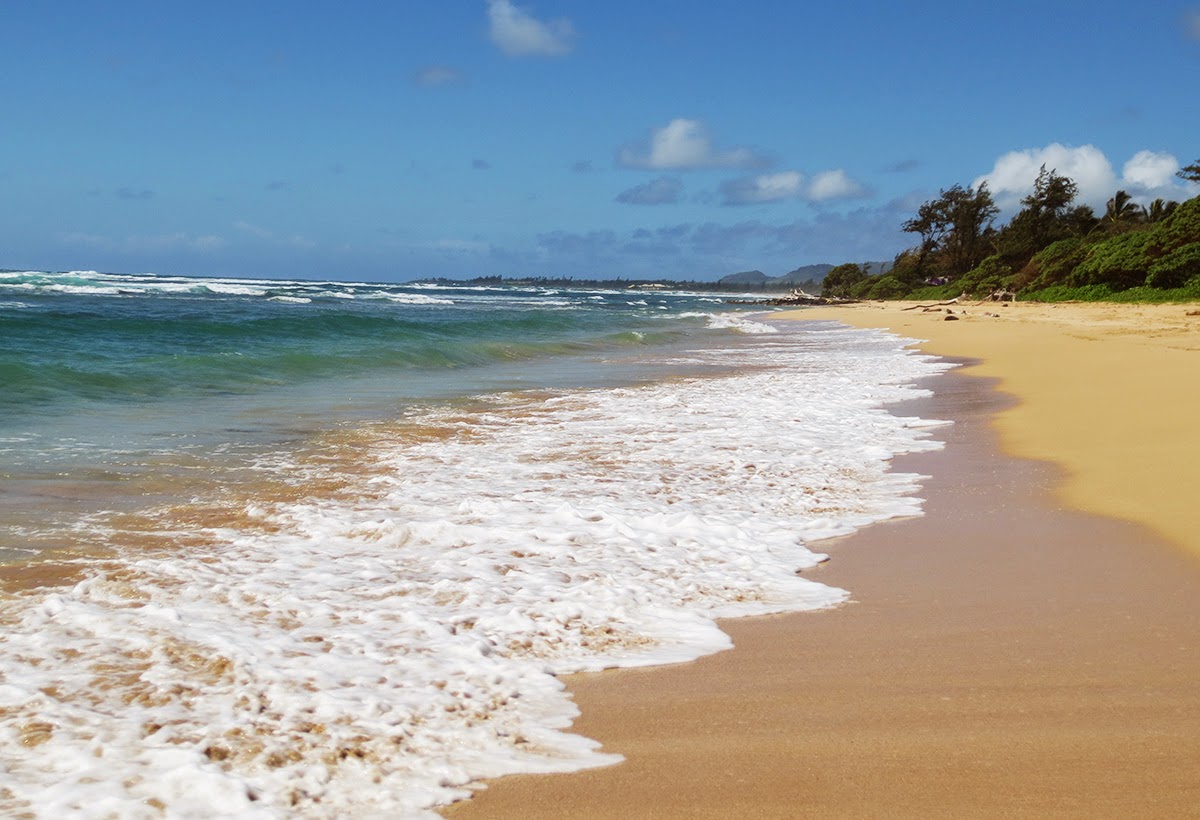 Due mostly to jet lag, we ended up waking up at six in the morning almost everyday. That gave us plenty of time to enjoy the early sunshine before it got too hot. Lydgate State Park was one of our favorite beaches throughout the entire trip. The sand was smooth and the waves were perfect, not too strong but still enough to knock me over if I wasn't paying attention. I'm definitely not one to go to a beach, lay on a towel and bake for several hours. It's too hot for that! I'm not sure if Lydgate is always so quiet but when we went, we had a huge swath of the beach to ourselves which I really enjoyed. 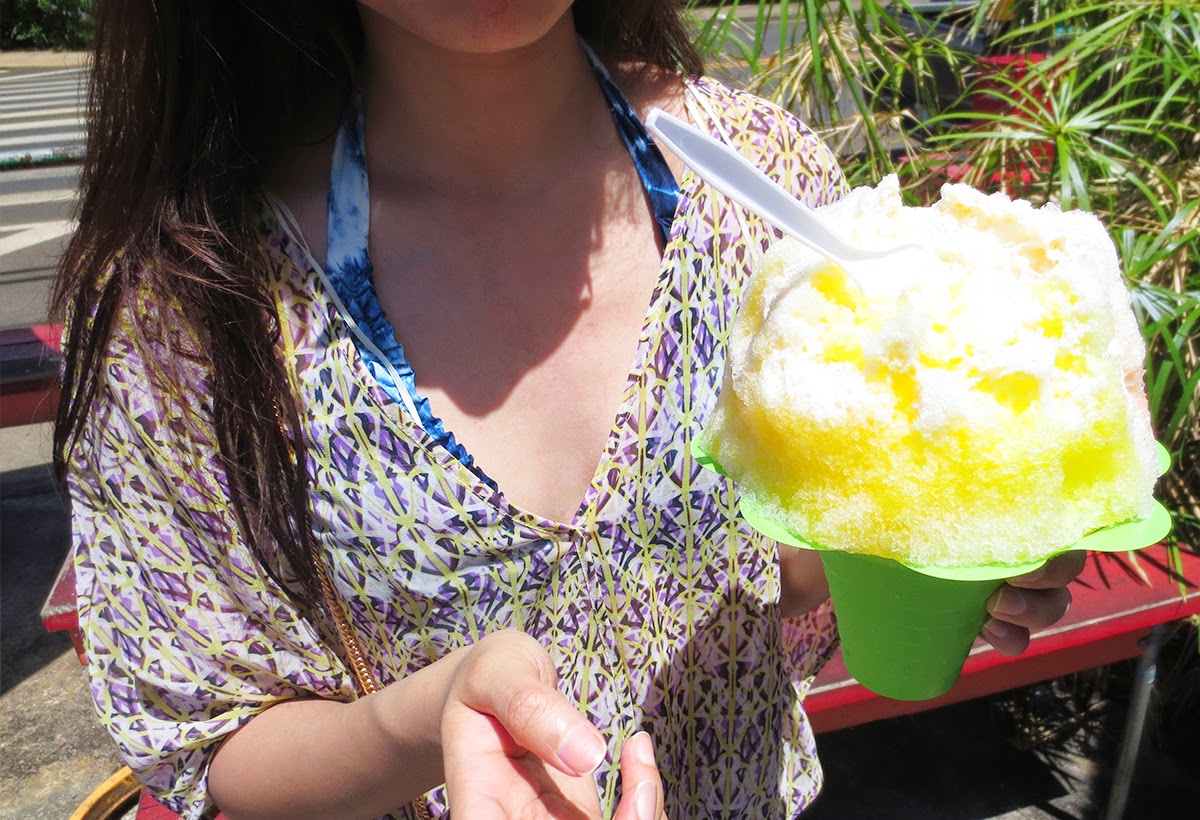 We drove through Kapaa on our way to the North Shore and stopped at Ono Ono Shave Ice for the largest frozen treat I have ever seen! We each got a huge shave ice with ice cream in the middle and we quickly realized we only should have gotten one. I don't remember the exact syrup flavors I chose but I opted for a scoop of macadamia nut ice cream and it was amazing. This was the beginning of our shave ice obsession.... 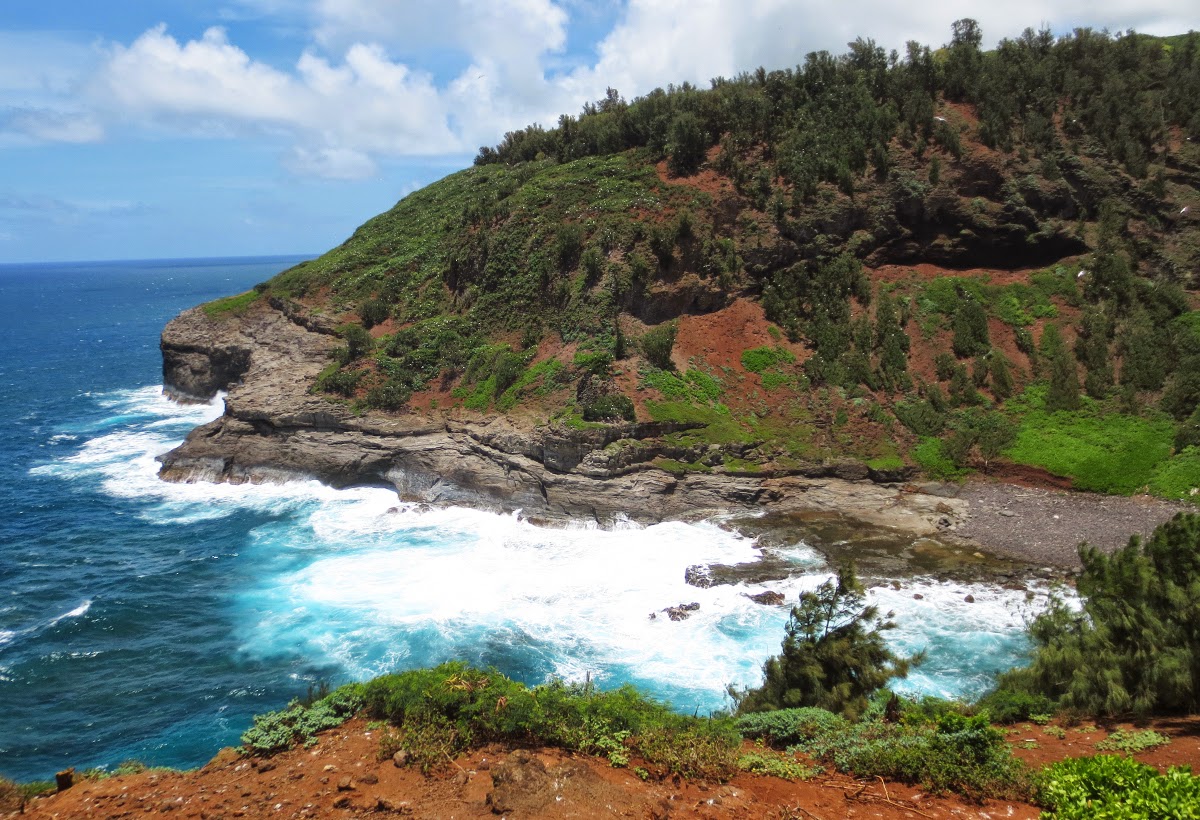 Who said you need to trek high and low to get a good view? For those not enamored with the mud and bugs of the outdoors, you might appreciate Kilauea Lighthouse. The lighthouse itself is not very impressive but the area around it is marvelous. You can view the northeastern edge of the island and marvel at the bluest waters you've probably ever seen in your life. 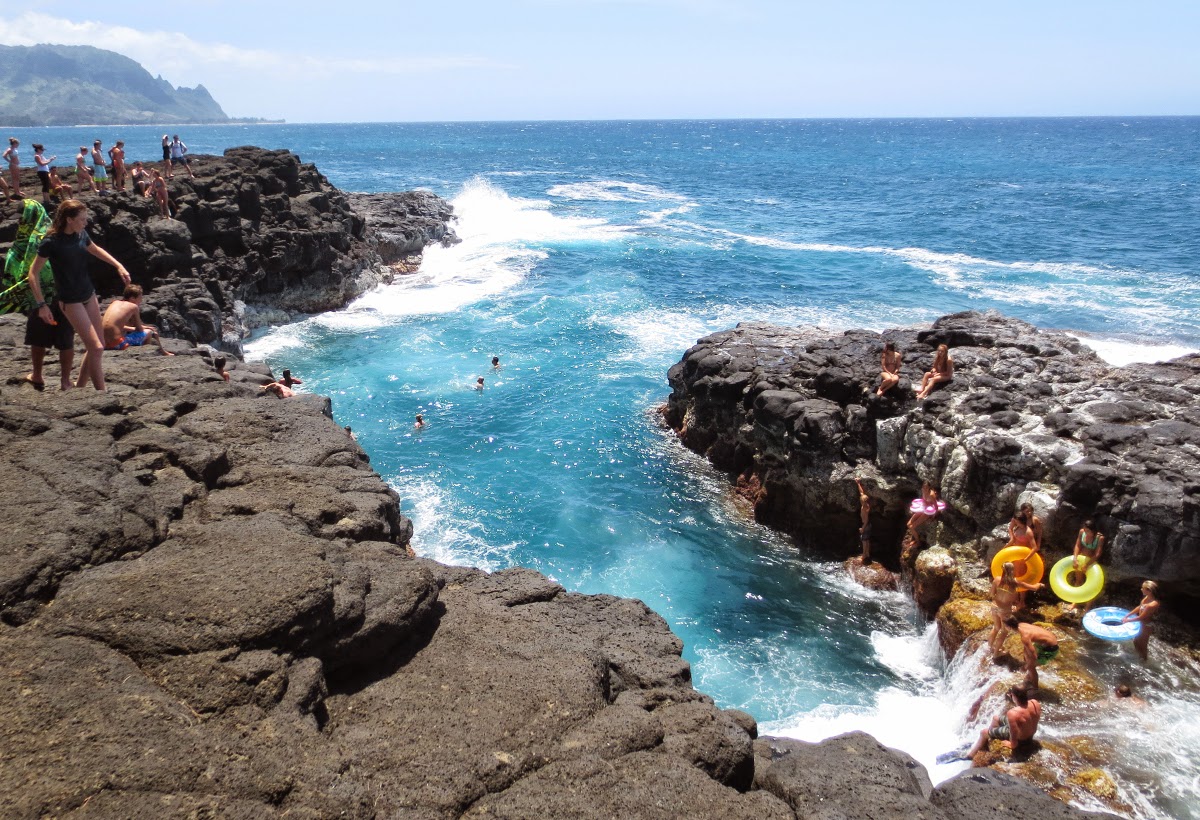 Continuing along the North Shore, you'll pass Princeville. This private community is aptly named and features perfect little suburbia vacation homes and pristine golf courses. Normally I wouldn't wander into a place like Princeville but we were seeking one of Kauai's most popular natural attractions, Queen's Bath. At first we thought Google Maps was trolling us because I couldn't fathom how Queen's Bath would be located in Princeville. But after a few circles around, we found a mini parking area for Queen's Bath visitors and we followed a rowdy group of tan, Californian-looking teenage guys into an area of tall grass that marks the hike to the coveted natural pool.

The hike down is quiet steep and a coating of fallen tree needles made it difficult to maintain even footing in flip flops. There are two paths down to the pools, one which is essentially a vertical rope climb down a rocky ledge or a less extreme dirt path which can be potentially muddy. The second option is more of a roundabout way and requires a lot more rock hopping once you get to the bottom. 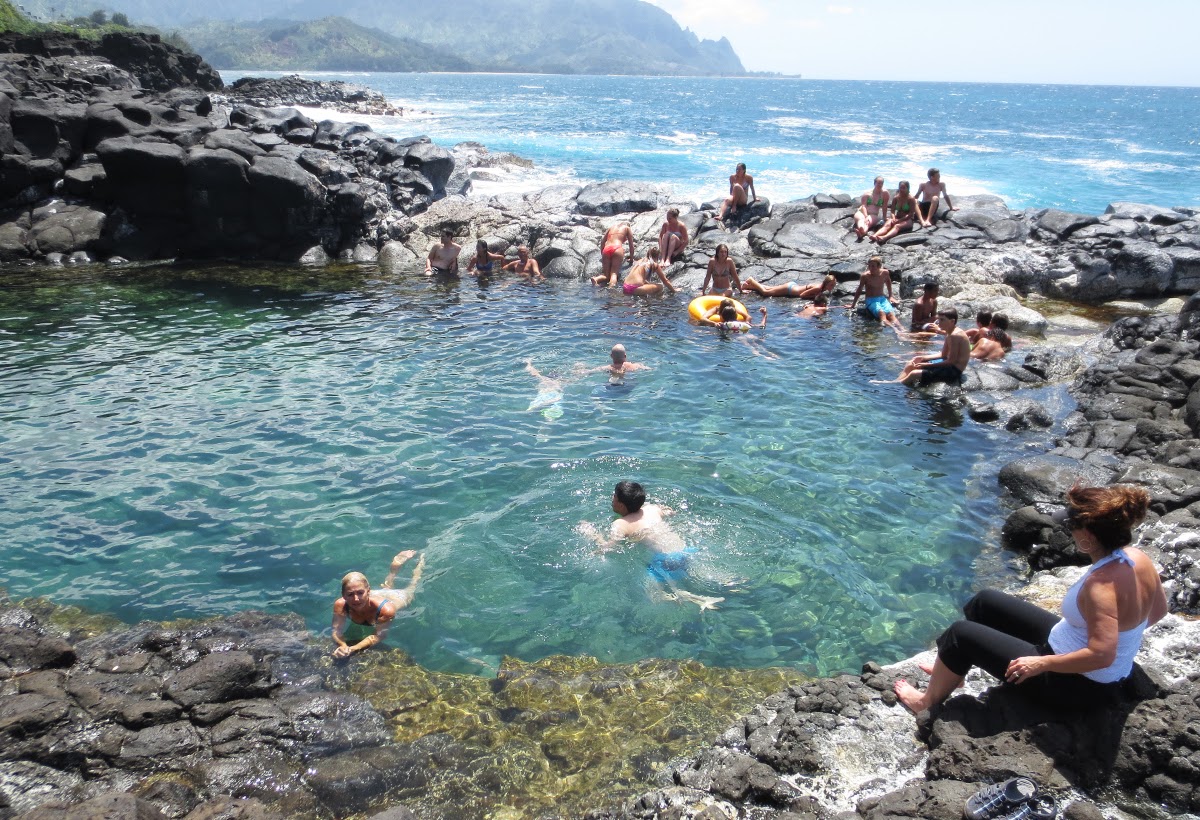 As you can tell, Queen's Bath was overrun by pubescent kids that afternoon. Honestly, while it wasn't that long ago since I was their age, I was always an old soul and I felt slightly uncomfortable around so many young kids whose parents probably were buying designer digs at the Princeville mall or playing a few rounds of golf. I felt strangely like the protagonist in a coming of age novel who didn't belong.

Anyway, back to Queen's Bath. The natural pool is a popular attraction but the government warns against visiting because the unpredictability of the tide can draw you out of the edges and drag you out to sea. Or worse, the waves can pummel you against the rocks and you can imagine the rest. During high tide, the bath is not visible at all and the water is usually rougher in the winter. Even in late May the waves could get quite big. In the previous photo, you can see there is another partially open area where preteens were cannonballing into. Several times there were children getting knocked off their feet while standing on the rocks and sometimes it took up to a few minutes for them to get back onto a ledge.

Getting back to our car proved a lot more difficult because we thought we'd try out the vertical rope climb shortcut. Both of us are scared of heights but the actual rope hike part wasn't that difficult. I took off my flip flops and slipped them onto my arms so my feet and hands were free to navigate the terrain. The hard part came near the top of the cliff where the rope abruptly ended. I don't know who installed the ropes but they really could have made the last rope higher on even ground. Instead, the rope terminated on an incline, right next to a mound of spindly cacti facing the open edge above the rocky shore.

This part of the story is rather embarrassing but I might as well be honest about it. After letting go of the last rope, I inched crawled towards some thick, exposed tree roots about two yards away. Unfortunately, the dry dirt was covered in pine needles (why are there pine trees in Hawaii anyway?!) and my feet were constantly slipping. I could not get a grip and even dug my fingers into the dirt at one point. I meekly sank into the red volcanic dirt and whimpered to Dennis, who was struggling behind me, that I couldn't move. Miraculously, I did manage to eventually squirm my way up to grab one of the roots but in that process, a flip flop untangled from my wrist and fell back down to where I had been minutes before. Dennis bravely went to retrieve my flip flop and it literally took five minutes to slowly clamber back down to pick it up and shimmy up to grab my hand. The whole time I thought either of us would slide down the hill and be done for. Or worse yet, that some thirteen year old would appear, expertly navigate the path and laugh at us.... Oh, and I forgot to mention that I did all this in only a new Lucky Brand swim suit and by planting my scared butt on the volcanic dirt (which apparently never washes completely out) I slightly ruined my bikini bottoms.

If you're an adventurous person who's not afraid to get dirty (and possibly injured) check out Queen's Bath and hope for a quiet day. If you're not about to fuss with the people and pines, you really won't be missing that much. 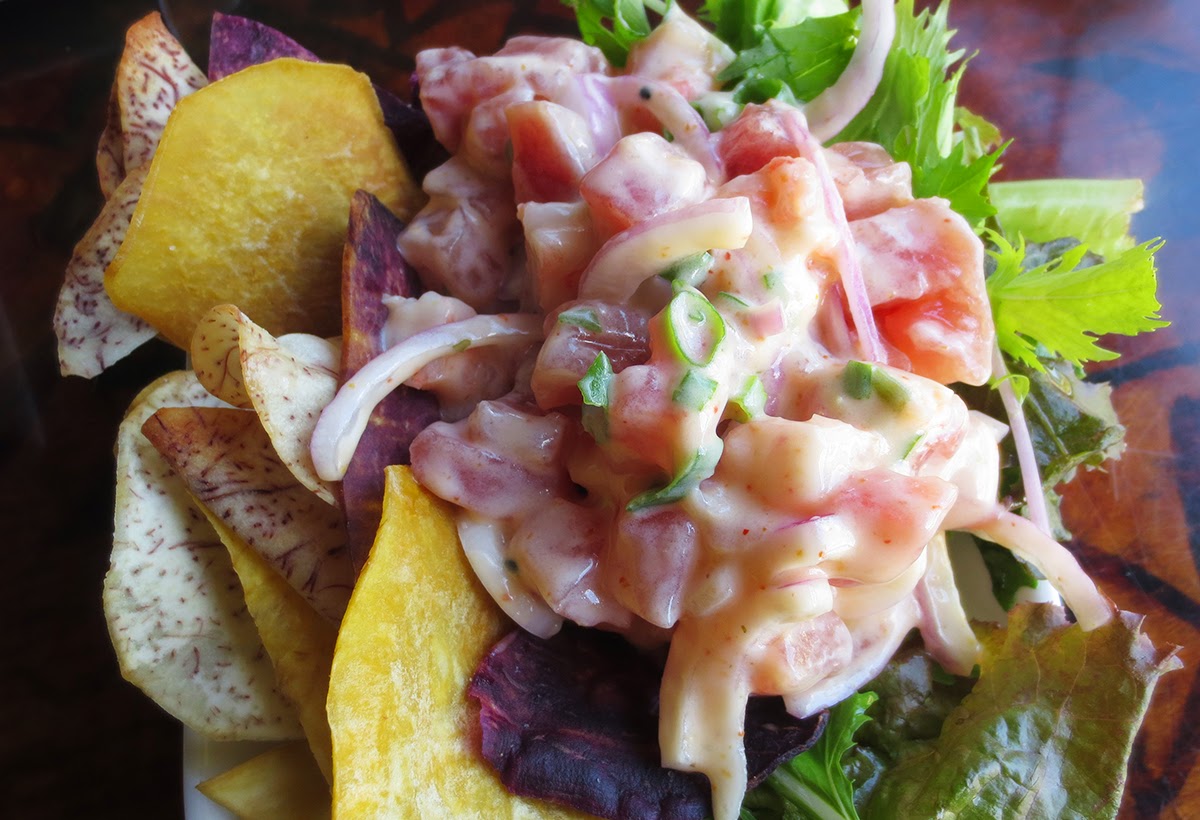 After our harrowing experience, we needed to calm our nerves with food... because what else is more relaxing than fresh fruit smoothies and Hawaiian small plates? It was about three in the afternoon so lunch was over and dinner had not started so we settled for pupus at Hanalei Dolphin Restaurant. Considering its proximity to Princeville, it's no surprise the prices were on the high end side and we definitely splurged on this meal. We had a spicy tuna roll, coconut milk poke, and calamari. The food was nothing special but it filled me up and at the time, that was all that mattered. 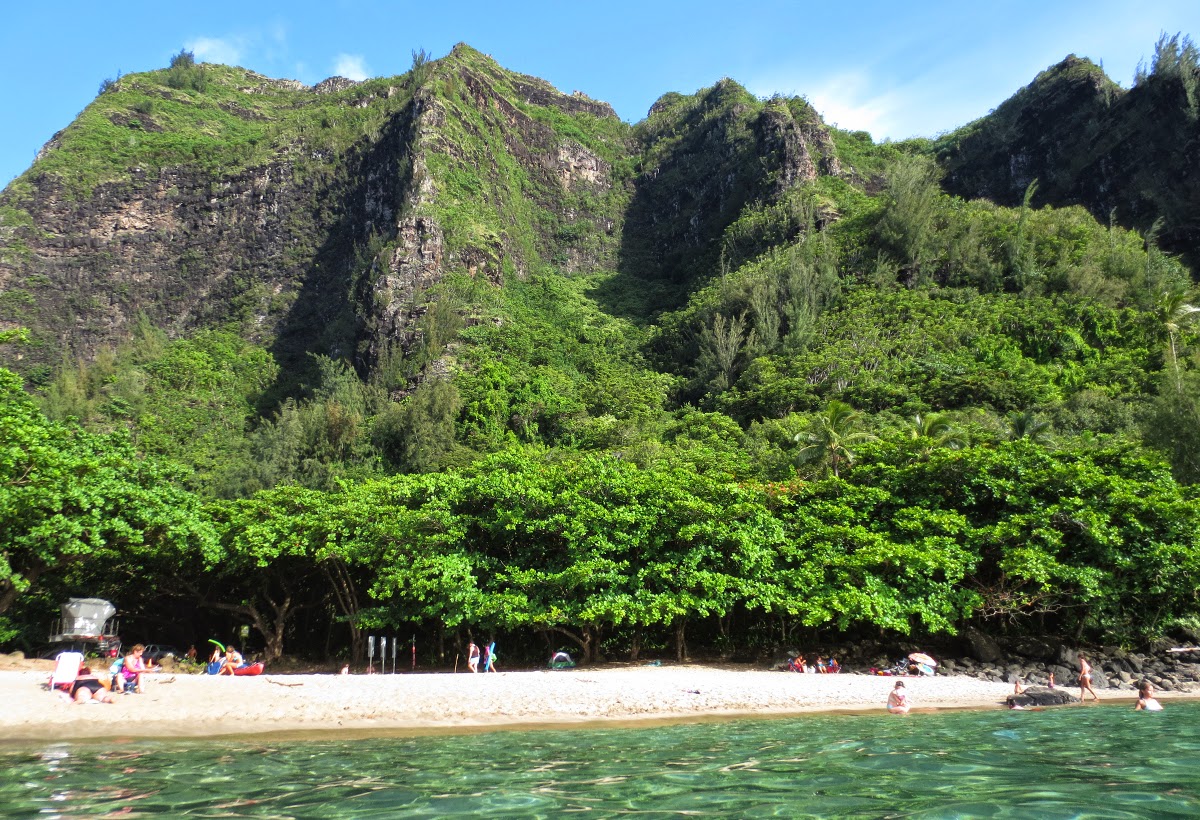 We drove further down the North Shore to reach the most Western point, Ke'e Beach. The area around Ke'e Beach also marks the start of the Kalalau Trail which takes you along the famed Napali Coast. The trail is surely beautiful but also difficult and should only be attempted by experienced hikers and outdoorsy people. Clearly I am not one of them and until I hunker down and prepare for a trek like Kalalau, I'll settle for the GoPro videos on Youtube.

Even if you have no intentions of embarking on Kalalau, it's worth the trip to Ke'e Beach. This beach is our top pick for "beach with a view". Bask in the calm waters and look up at the moss covered beginnings of the Napali Coast. There are a lot of chickens on this beach so if you bring food, make sure to wrap everything up well or else they'll ransack your base. Ke'e Beach truly made me feel like I was in paradise and it is not to be missed! 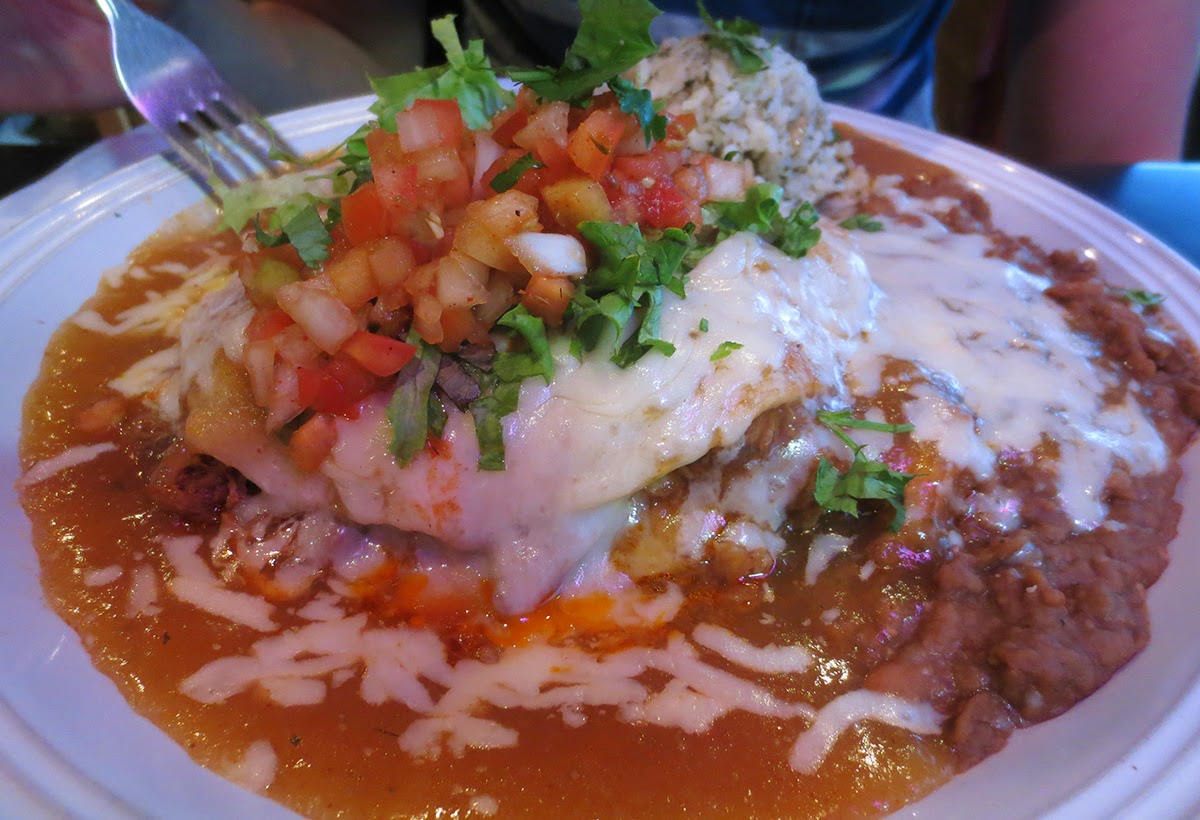 The drive back to Kapaa on the East Shore after spending sunset at Ke'e Beach was quite long so we were unsurprisingly famished. We enjoyed Verde so much that first night after we landed that we decided to end our Kauai trip where it first began. Instead of getting fish again, we opted for the pork dishes. I had the pork tostada and Dennis chose the pork enchilada shown above. I prefered the ahi to the pork but the enchilada was delicious!

That sums up our brief but fun-filled time in Kauai. Next up, I'll show you my top picks and skips in Oahu!
Labels: food travel