Here is the final installment of my Hawaiian travel recap! We spent the last three nights of our vacation near the Waikiki strip and I didn't plan anything too specific because I knew there would be lots to eat and do in the area. We also chose not to rent a car for the last three days and just walk to nearby places. Waikiki is definitely a touristy resort area which is both good and bad. Kalakaua Avenue is the main road and is the tropical version of Fifth Avenue. High end hotels dot the beach and this was surely the most commercialized area we saw during our stay. 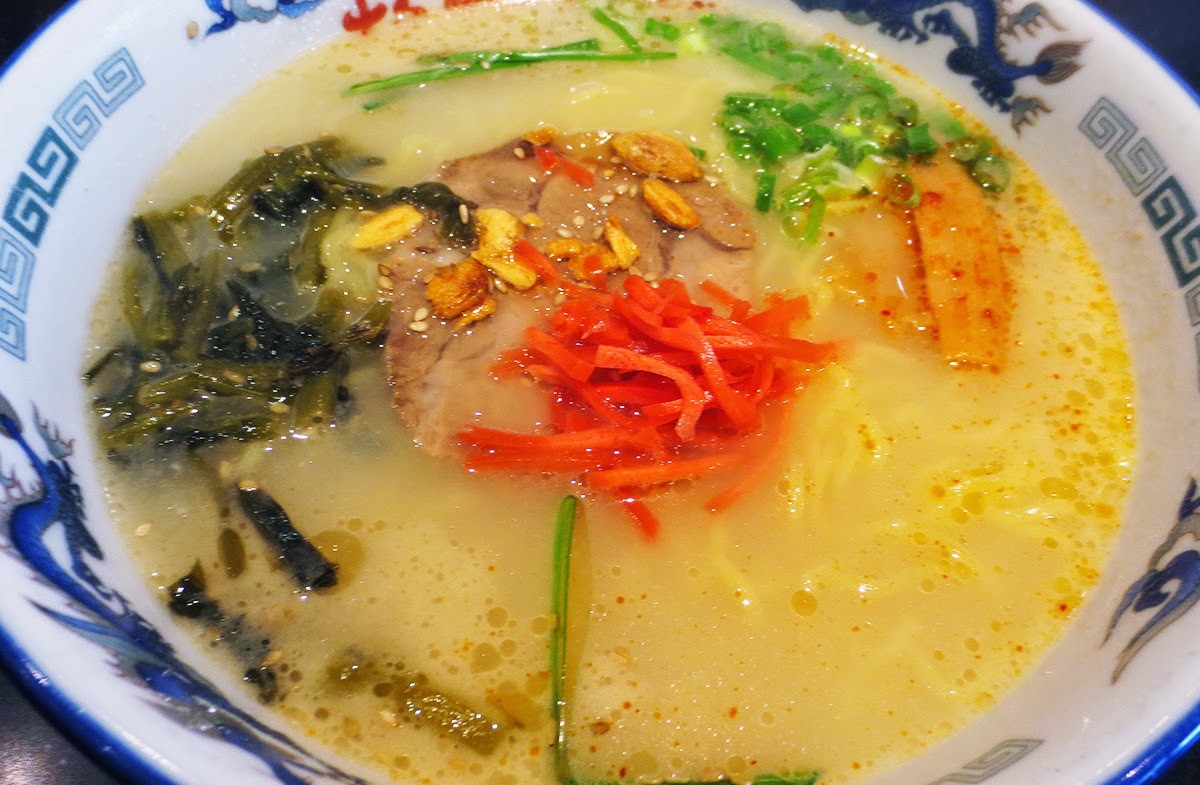 There are a lot of Japanese tourists in Waikiki and the food clearly reflects this. We stopped by Ramen Nakamura for a late lunch and the rave reviews on Yelp were justified. I had a delicious tonkatsu ramen with a side order of pork dumplings. The ramen was perfectly chewy, just the way I like it. I would rank this place on par with Ippudo in New York and the prices are even cheaper at Nakamura. 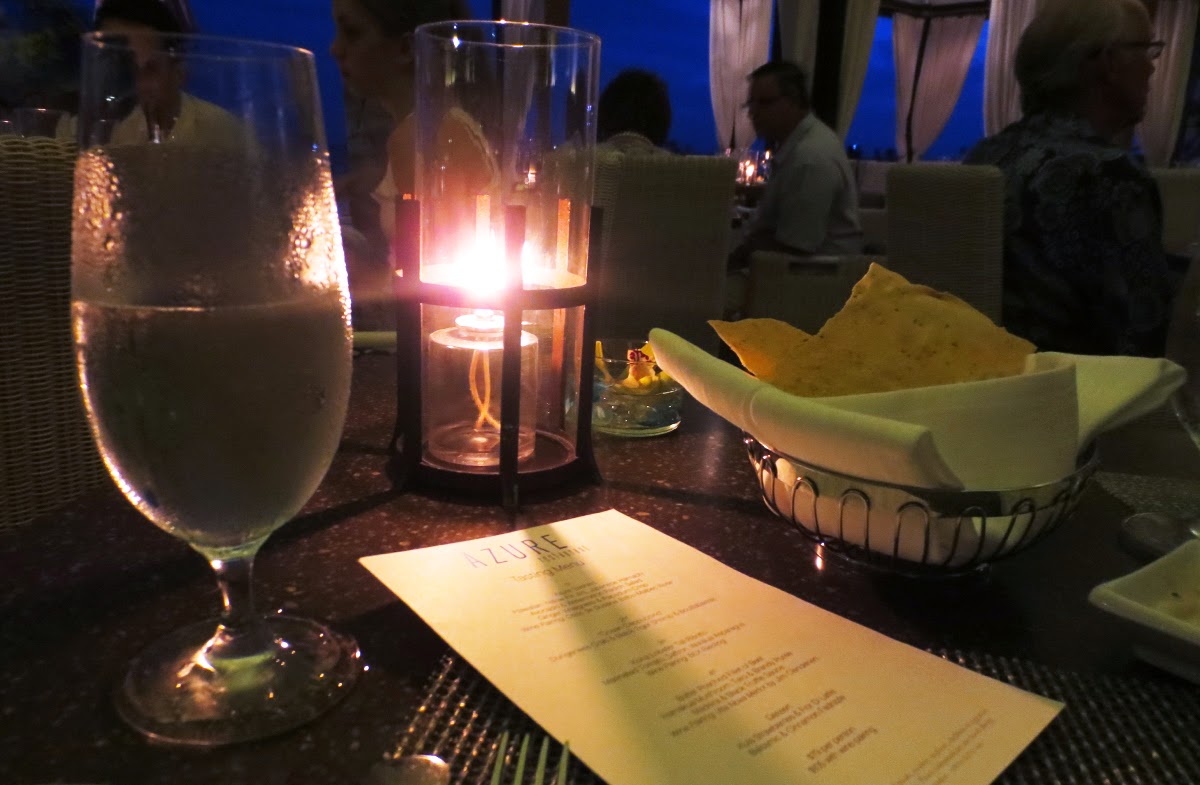 Later that evening we splurged on a luxe dinner at Azure located in The Royal Hawaiian. We both opted for the tasting menu and Dennis also went with the wine pairing. The restaurant is located right on the beach and we watched the sun set from the outdoor seating area. The first course consisted of the most amazing sashimi I have ever had the pleasure of tasting. The dungeness crab and black tiger shrimp bouillabaisse was a bit too salty for me as was the lobster tail risotto. For the fourth course we both opted for one of their fresh fish dishes instead of the fillet of beef which had a unique sesame sauce. The last course was a delicious ice cream with fresh strawberries and a balsamic cinnamon sauce. The balsamic tang went surprisingly well with the sweetness of the ice cream and I lapped up ever little bit.

Our server was Andrea and she made us feel very comfortable and welcome although it seemed we were the only ones in the restaurant in our age group. This was the most expensive dinner we have eaten to date but we would do it again in a heartbeat and it was totally worth the two and a half hours we spent there! 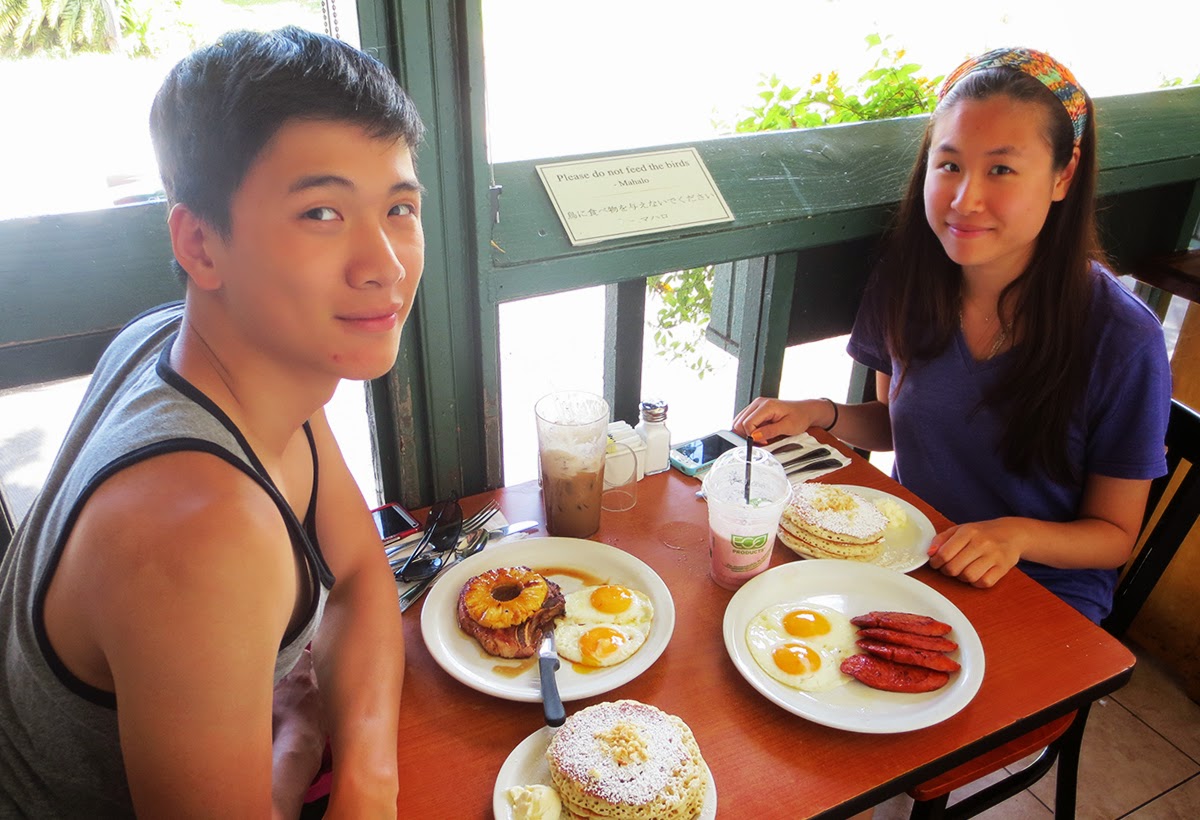 The next morning we set off to get a filling breakfast at Eggs n' Things before laying out on the beach. Be warned if you want to have breakfast at this popular eatery because the wait is long. We waited probably what felt like ages but in actuality was probably over 30 minutes. I had a strawberry smoothie and the eggs and portuguese sausage combo with macadamia nut pancakes. Their pancakes are supposed to be their star item and although the macadamia nuts were only sprinkled in the middle of each pancake, they were scrumptious! 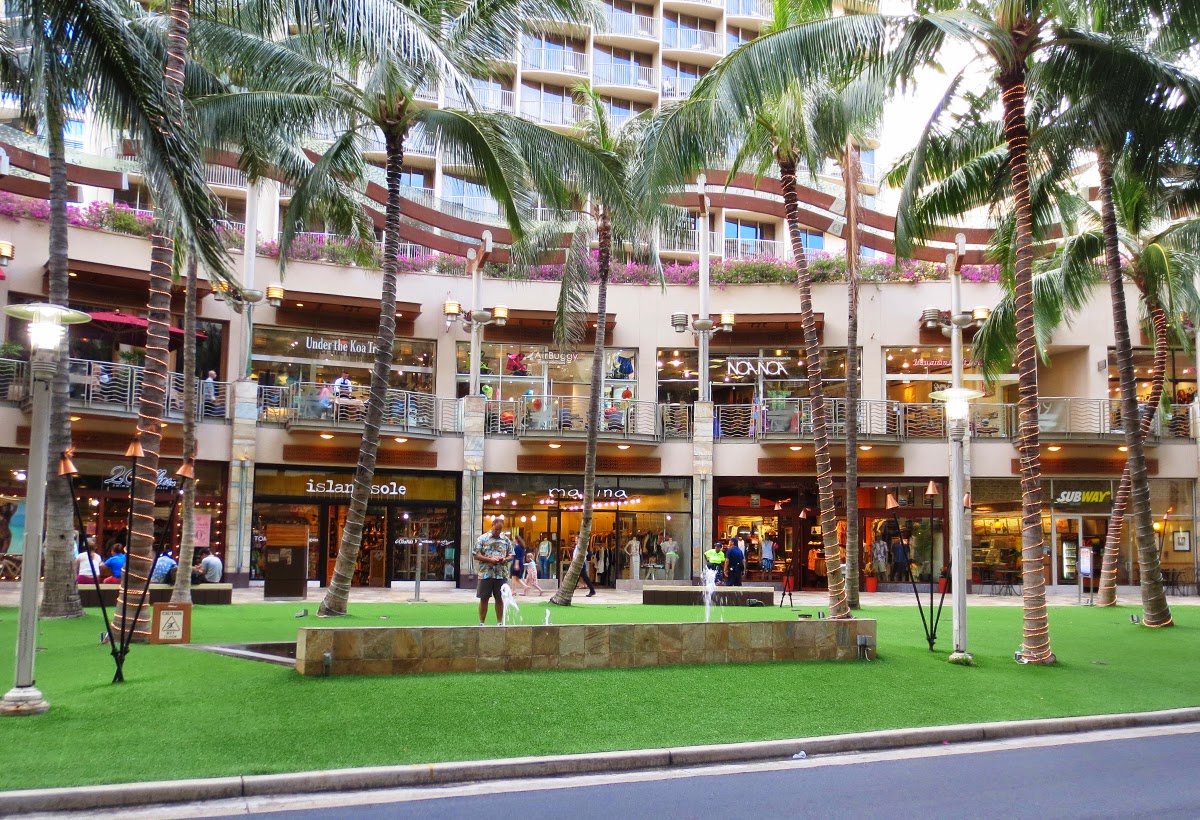 I loved the open air malls in Waikiki and thoroughly enjoyed perusing the summer racks. Everything along Kalakaua Avenue is very clean and appealing day or night. The prices are a bit high though so I'd advise you to save up if you plan on shopping in this area. All of the major fashion houses such as Chanel and Dior also have flagship stores in this area which is great if you're from a small town. 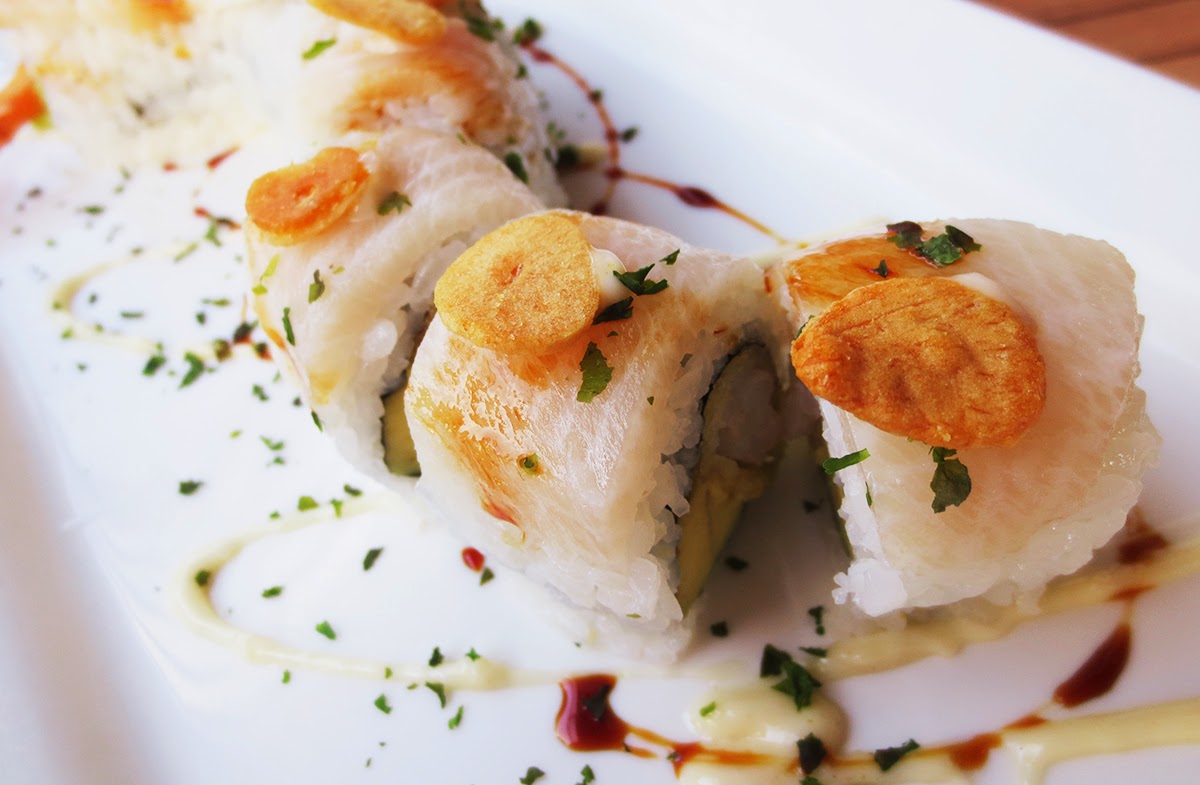 If you're into happy hour noms, check out Doraku Sushi. This restaurant is owned by Kevin Aoki, brother to Steve Aoki and Devon Aoki and son of Rocky Aoki who founded Benihana. The Aoki siblings are all on point and Kevin Aoki knows how to make sushi tasty and fun without sacrificing on quality. The rolls are aesthetically pleasing and refreshing. 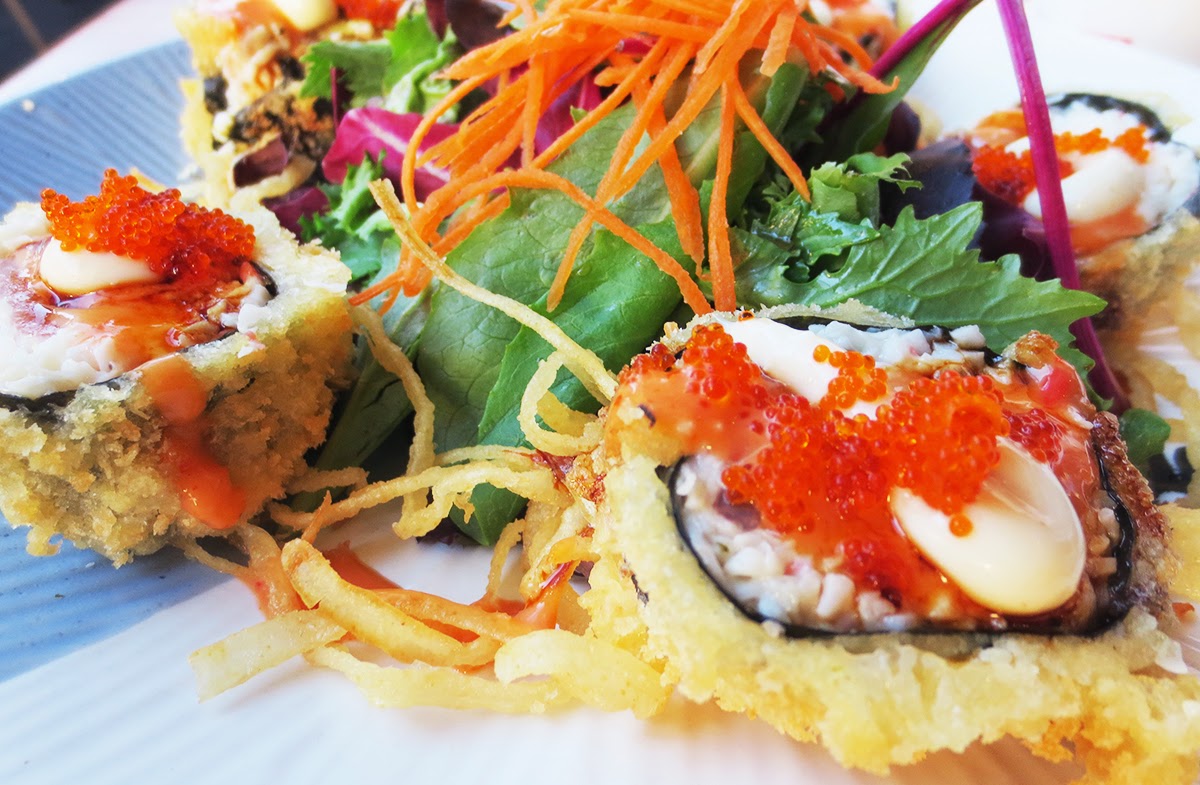 Above is the emperor roll which is a mixture of tuna, salmon, crab, shrimp, scallop and avocado with a fried panko breadcrumb coating. It's definitely not traditional but was an explosion of flavor and surprisingly not too greasy despite being deep fried. Doraku is a super laid back and chill place to have drinks and snacks with friends and I wish we had it in New York. 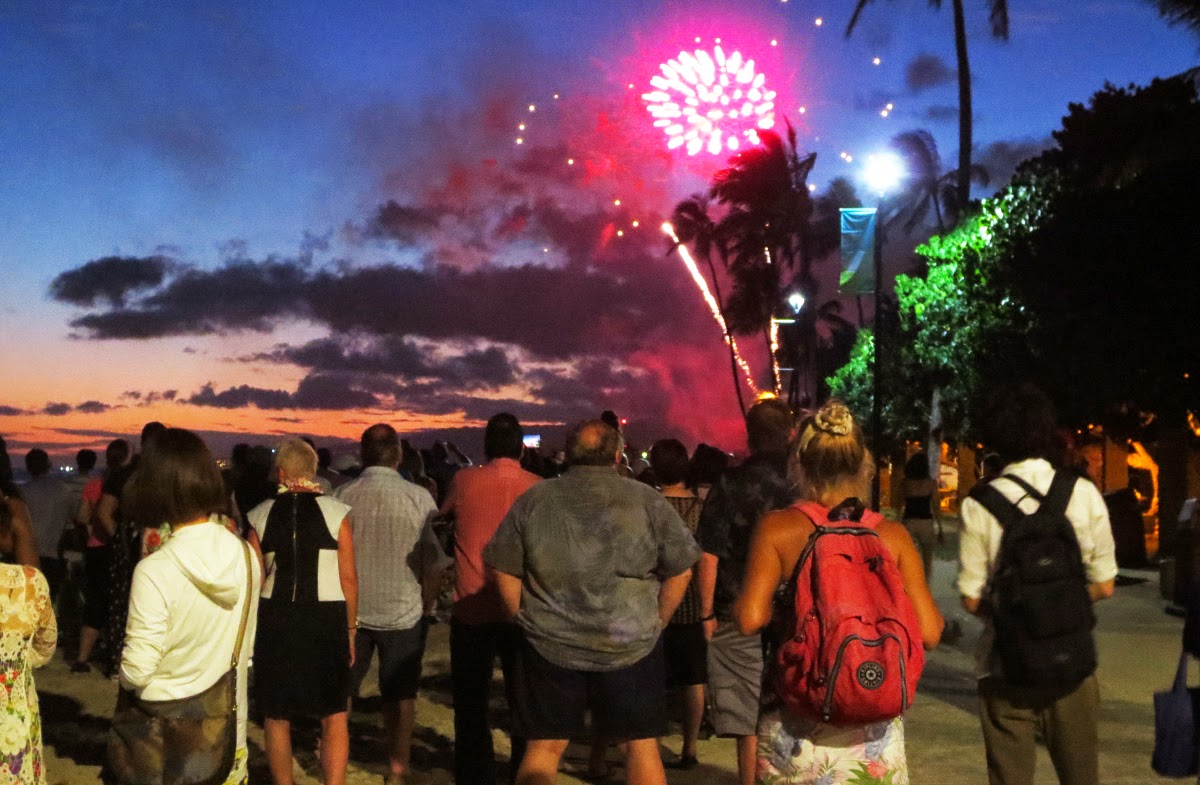 On Friday nights the Hilton Hawaiian Village has a short fireworks display which we made a point of catching. Crowds gathered at the edge of the beach to catch the brief show and it's worth it if you're in the area. There's always something magical about seeing fireworks in real life. 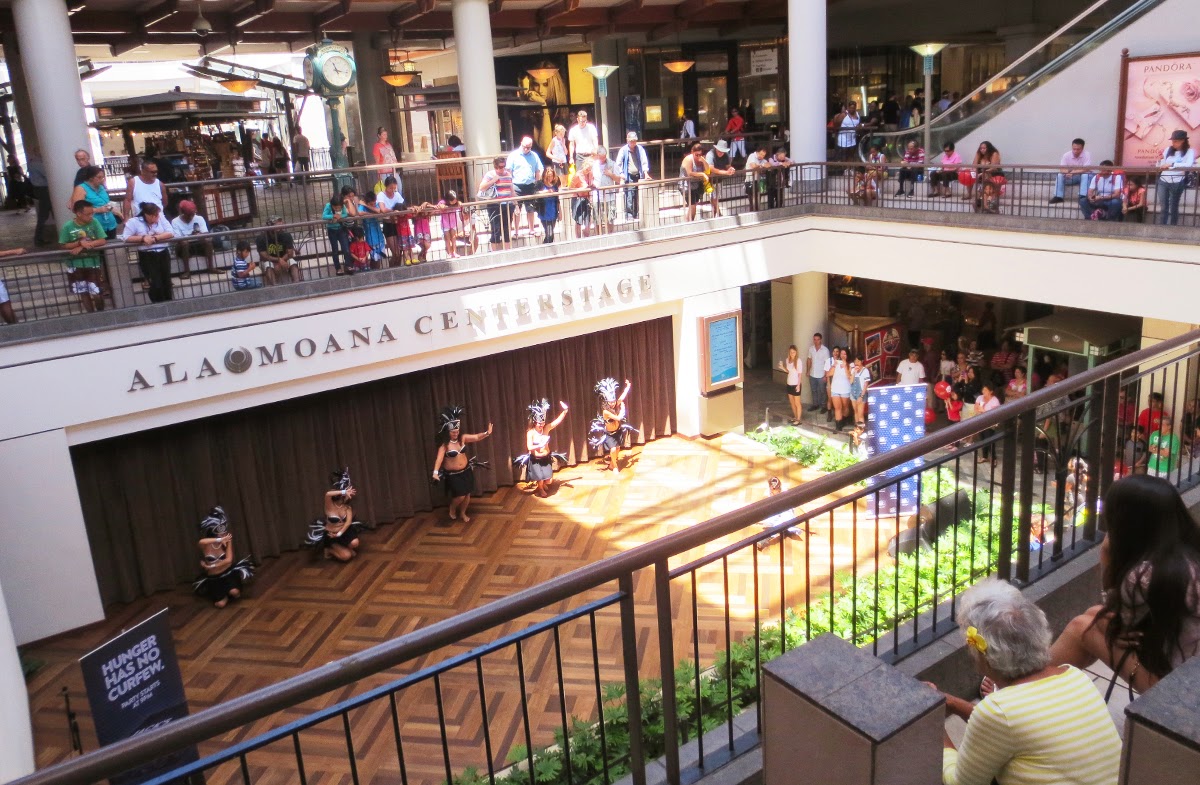 If you love to shop, you should definitely allocate a few hours to Ala Moana Center which is the largest open air shopping mall in the world. It's huge! You have all the major department stores like Nordstrom and Neiman Marcus and many big name designers as well. They feature performances throughout the day in the centerstage area and we passed an hour or two watching free hula shows and dance routines by local schoolkids. 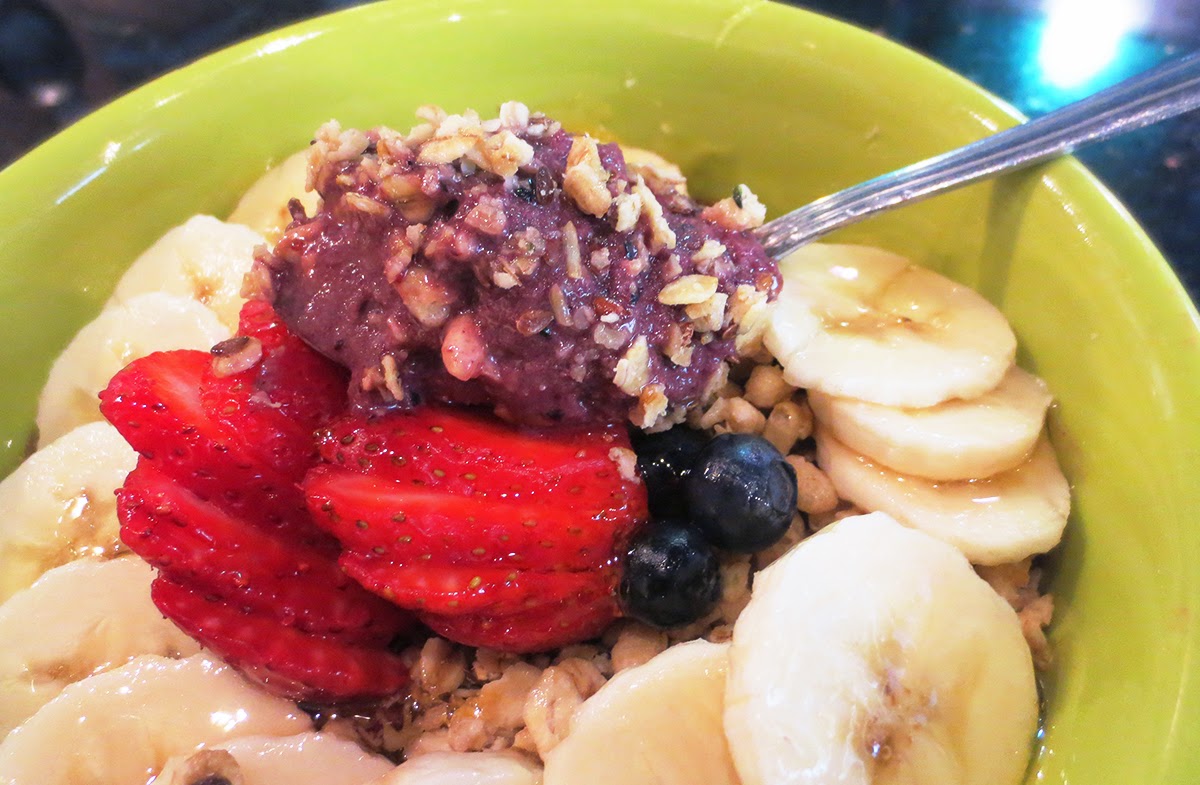 If you're looking for a healthy bite to refuel inbetween all the hauling, stop by Blue Hawaii Lifestyle which serves up huge acai bowls! Again, like I said in my previous post about the acai bowl we had in the North Shore, acai bowls are pretty much all the same to me. But that doesn't make them any less yummy!


A lot of the food in the Waikiki area is Japanese or Japanese inspired so we were getting pretty tired of sushi by the last day. We found Arancino on Beachwalk on Yelp and decided to give it a go. The wait can be long at peak dinner times but we were fortunate to have arrived just as a couple was leaving. We had the squid ink pasta as well as the tobiko and calamari pasta shown above. We also ordered an appetizer sampler which was not worth the price for a piece of prosciutto wrapped papaya, itty bitty caprese and a bit of shrimp over mixed greens. The squid ink pasta is just regular pasta in squid ink sauce rather than actual pasta infused with squid ink. The tobiko and calamari pasta was nice and the fish roe gave the dish a nice bite. The complementary bread was very soft and filling and I ate way too many pieces in one sitting. I liked the cozy atmosphere of this quaint little restaurant and would recommend it although I'd pass on the appetizers. 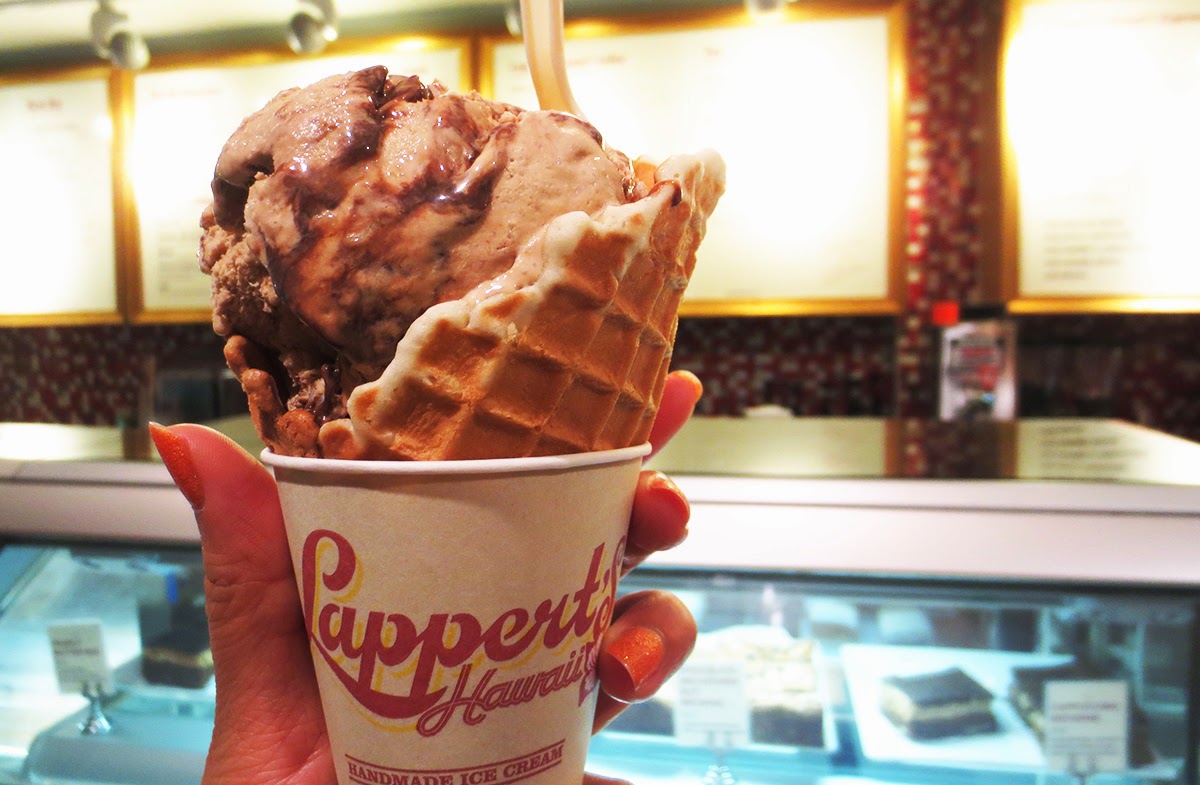 To wash down all those carbs we had to try the famous ice cream from Lappert's. It took a bit of time for us to find this shop in the Hilton Hawaiian Village as it's all the way in the back and out of sight. I had a scoop of Kauai Pie which is kona coffee ice cream swirled with chocolate fudge, coconut flakes, macadamia nuts and vanilla cake crunch. I realized at first lick that I should have opted for a less hearty flavor as the pasta and bread was already so filling. Lappert's is really popular but is it worth the hype? Not in my opinion. One scoop is about $5 which is borderline highway robbery. Skip this and get yourself a whopping Hawaiian shave ice instead.

This concludes my cursory glance at what Kauai and Oahu have to offer! It would take years to thoroughly learn about the rich history and culture the islands of the American Pacific have to offer but 10 days was already a dream come true. Until next time (from an East Coast girl who isn't ready for another 10 hour flight anytime soon)!
Labels: food travel