A Rambly Recap of My Weekend in D.C. 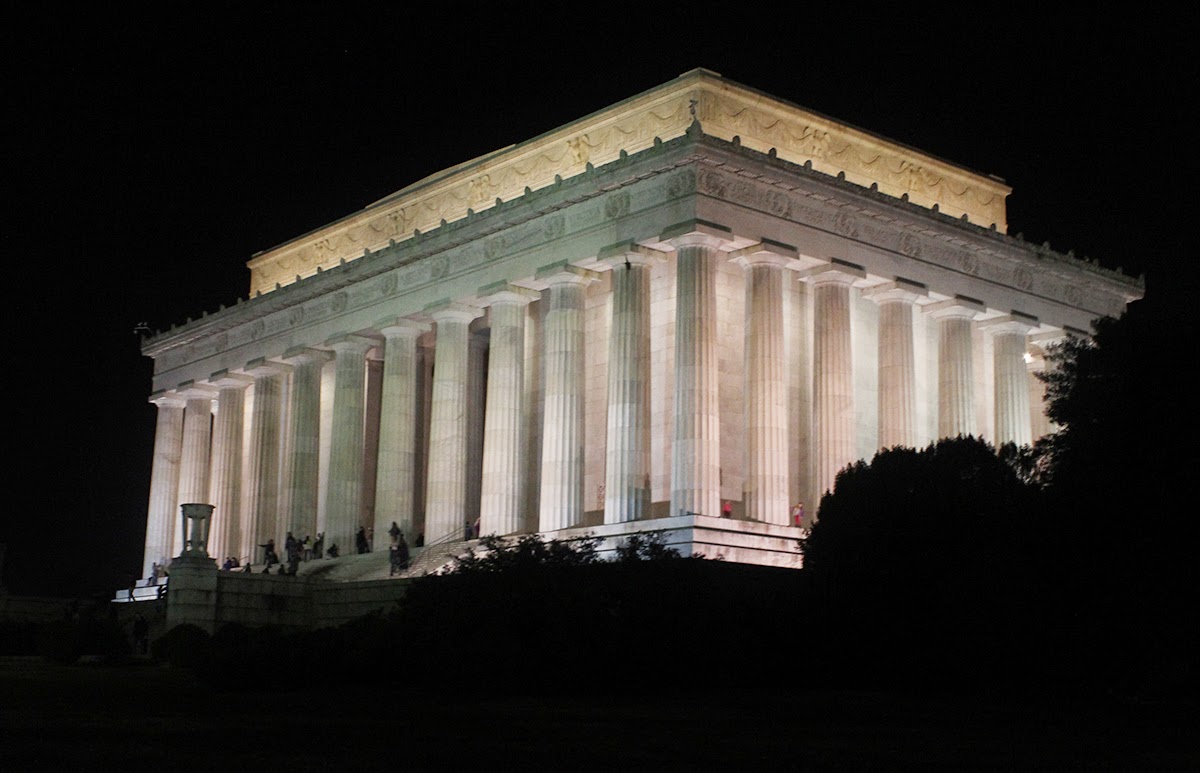 Last year I did a lot of international traveling and I realized there is so much more to explore within the United States. With a full time job, it's quite difficult to leave for a few weeks at a time so I have to be more mindful about trip planning. This past weekend I decided to drive down with my parents and boyfriend to nearby Washington D.C. to visit a city I haven't been to since I was in elementary school. From the beginning of the year, I've had plans to visit D.C. to see some of the monuments I missed when I was earlier. 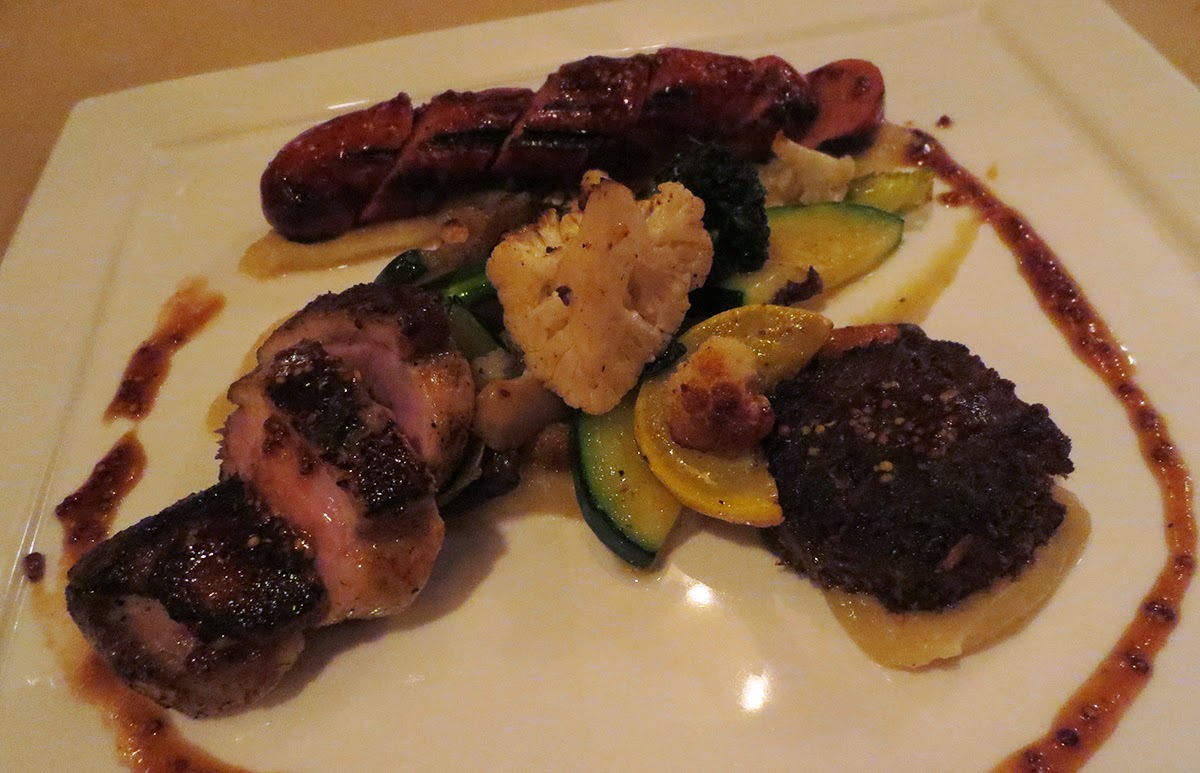 We started our trip around 11AM in New York and made a pit stop at a Delaware restaurant named Crabby Dick's that we had eaten at years ago. Unfortunately there were no broiled crab dishes as they're not in season but we had a delicious late lunch nonetheless. If you're road tripping along the East Coast in the summer, I'd recommend stopping by.

We arrived in D.C. in the early evening which gave me enough time to shower and apply some makeup before dinner. We stayed at the Mandarin Oriental because my Dad works at the New York location and we could get a very reasonable rate. Otherwise, I don't think I'd be able to afford the rooms anytime in the near future.... The rooms were very comfortable and the bathroom was definitely my favorite part. The deep soaking tub was so lovely at the end of a long day of walking.

It took about half an hour of walking to get to the downtown area where we had dinner at Cedar, a recommendation from Monika. The food was decent but I think my expectations were higher than what was delivered. I had the duck dish, pictured above, which was rather forgettable. The scallop appetizer was tasty but I don't think I've ever met a scallop that I didn't enjoy eating. I also tried the interesting lobster white chocolate soup out of curiosity more than anything. It tastes like how you would expect a sweet seafood soup to taste and I wouldn't get it again. The food took awhile to prepare and the dinner stretched out for longer than I thought was needed. The prices are comparable to New York City restaurants such as Locanda Verde and Nomad but the atmosphere, service and quality of the food is noticeably better at Locanda Verde and Nomad. Cedar wasn't bad, just not good enough to warrant a second trip. Just my two cents. 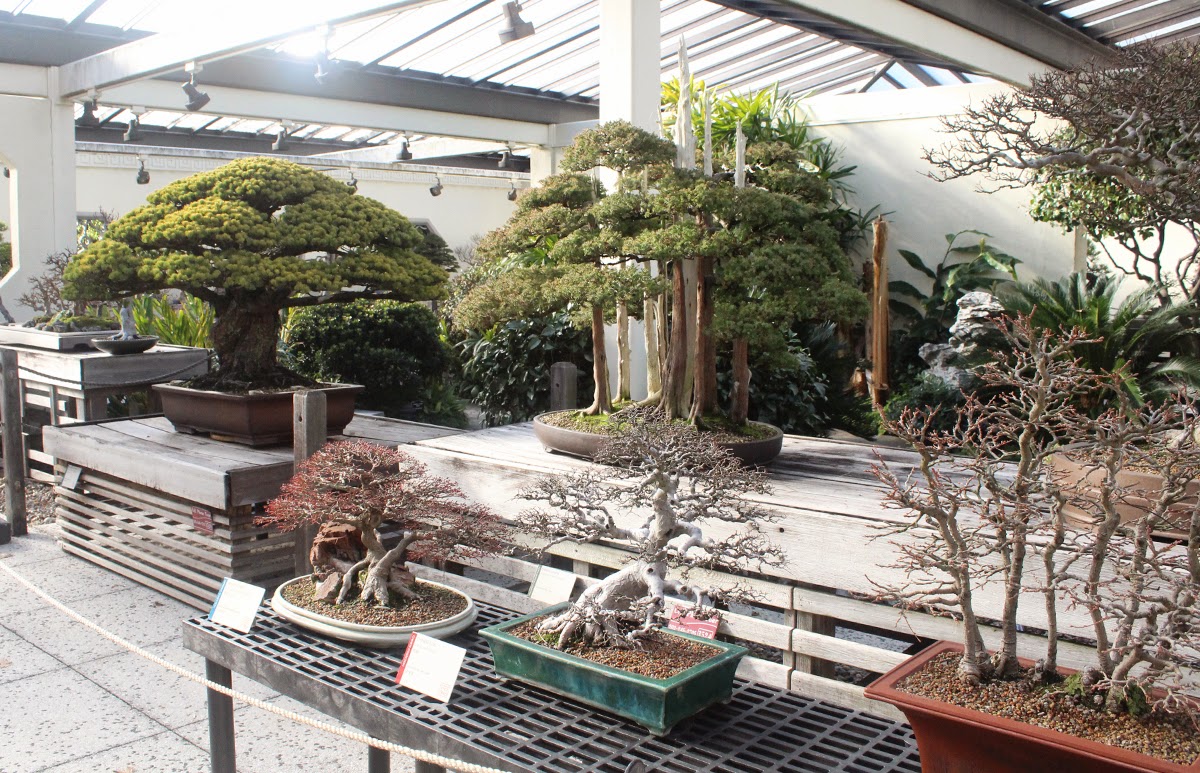 The next morning we set out early for the National Arboretum. Winter isn't the best time to visit a garden but the bonsai exhibit was alive and well. One of the best things about D.C. is that almost all the attractions are free so if you don't like what you see, you aren't obligated to stay long. The National Arboretum is a peaceful place to take a long stroll on a sunny day if you're in the area. 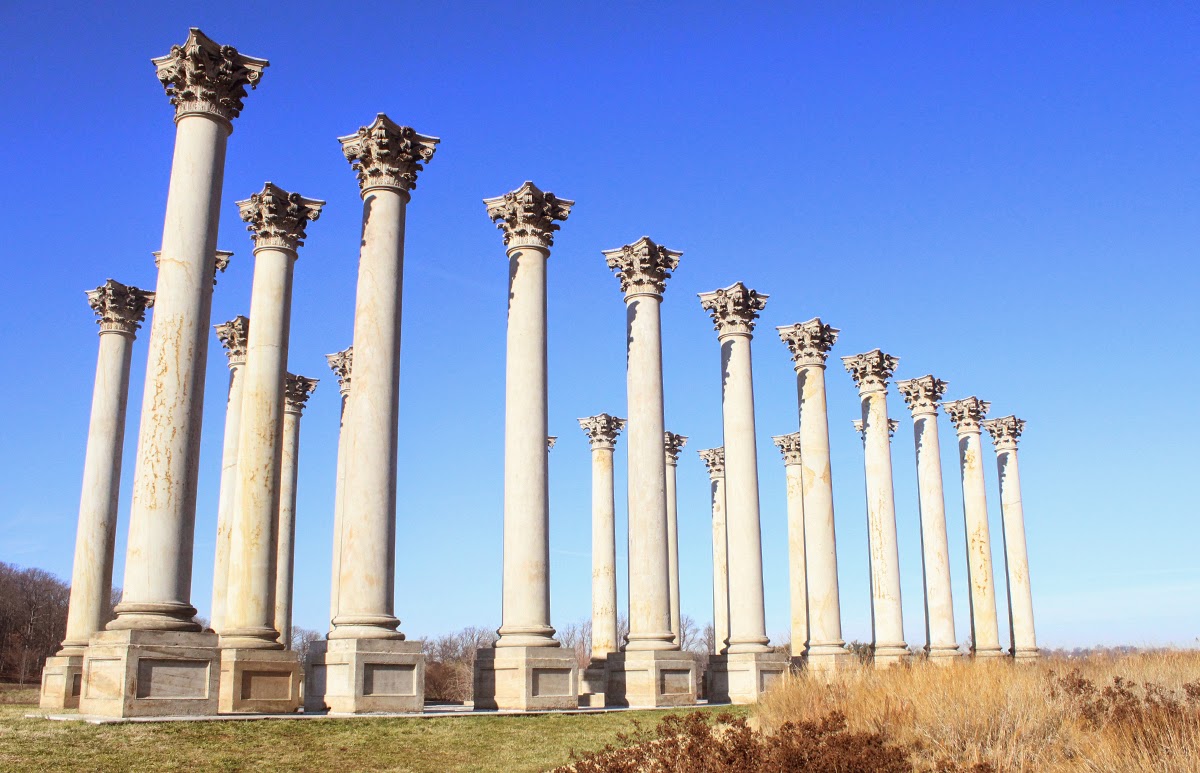 The most striking thing you'll see at the National Arboretum are the National Capitol Columns, retired columns from the Capitol before a renovation. From afar the columns look very out of place in the middle of a grassy clearing. I imagine this area gets much more busy during the spring and summer. 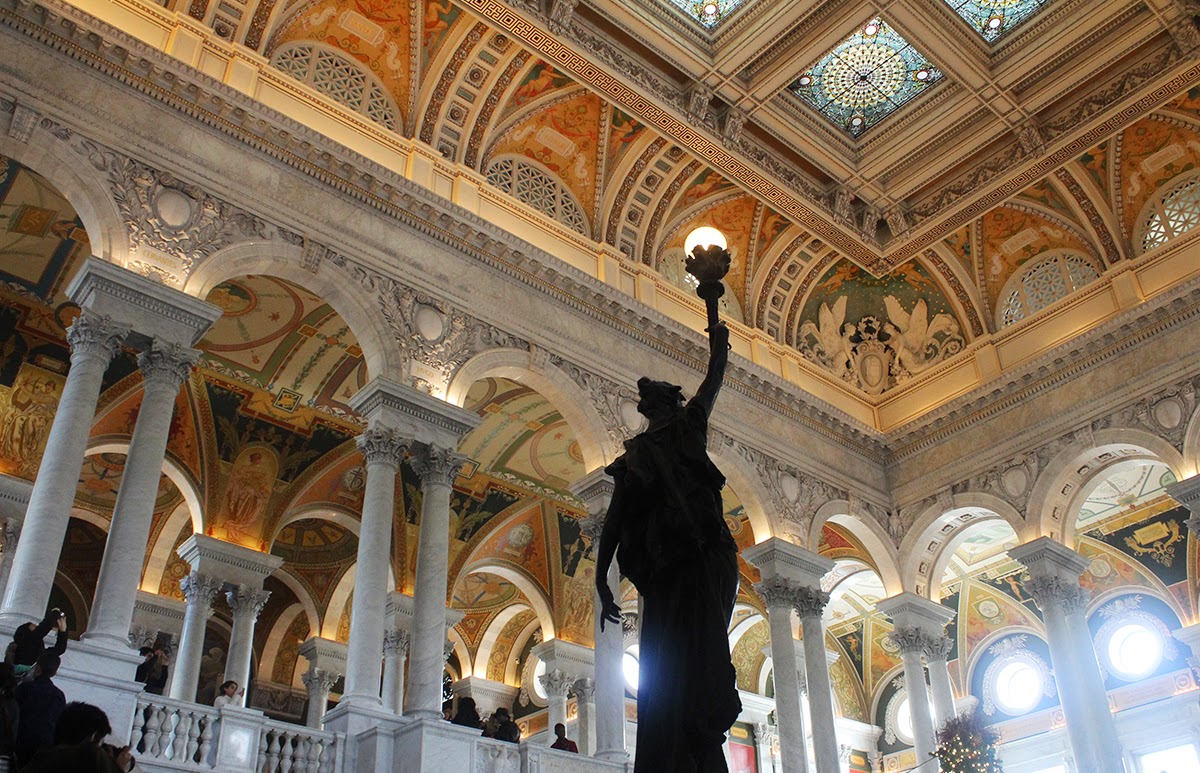 Next up we drove to the Library of Congress which is the largest library in the world. I had failed to realize that there are actually three different buildings that make up the Library of Congress and wandered into one of the less aesthetically impressive ones first. The one that most visitors go to is the Jefferson building which is more like a museum rather than a library. The area with Thomas Jefferson's original books is worthy of a look. 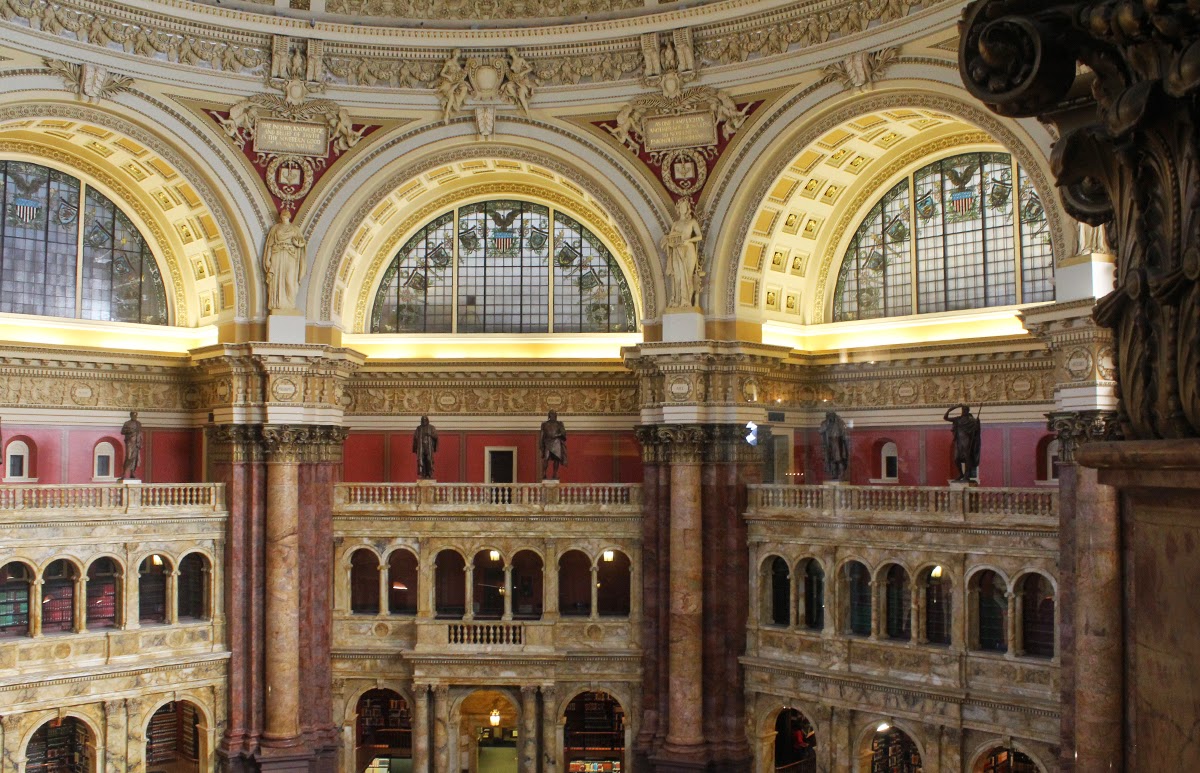 The ornate library transports you to another era and an entirely different America. The Main Reading Room is beautifully ornate and although I believe only researchers are allowed into the actual room, you can view it from the third floor balcony. After walking about the library we had worked up an appetite and found a busy pizza place called We, The Pizza. I had a slice of white pizza and another with sausage and peppers which I thoroughly enjoyed. I just looked up the Yelp reviews and I see a lot of mixed feelings. Usually I rely on Yelp for food recommendations but I disagree with the Yelp reviews this time around. If you fancy an inexpensive, quick and tasty bite, try out We, The Pizza. 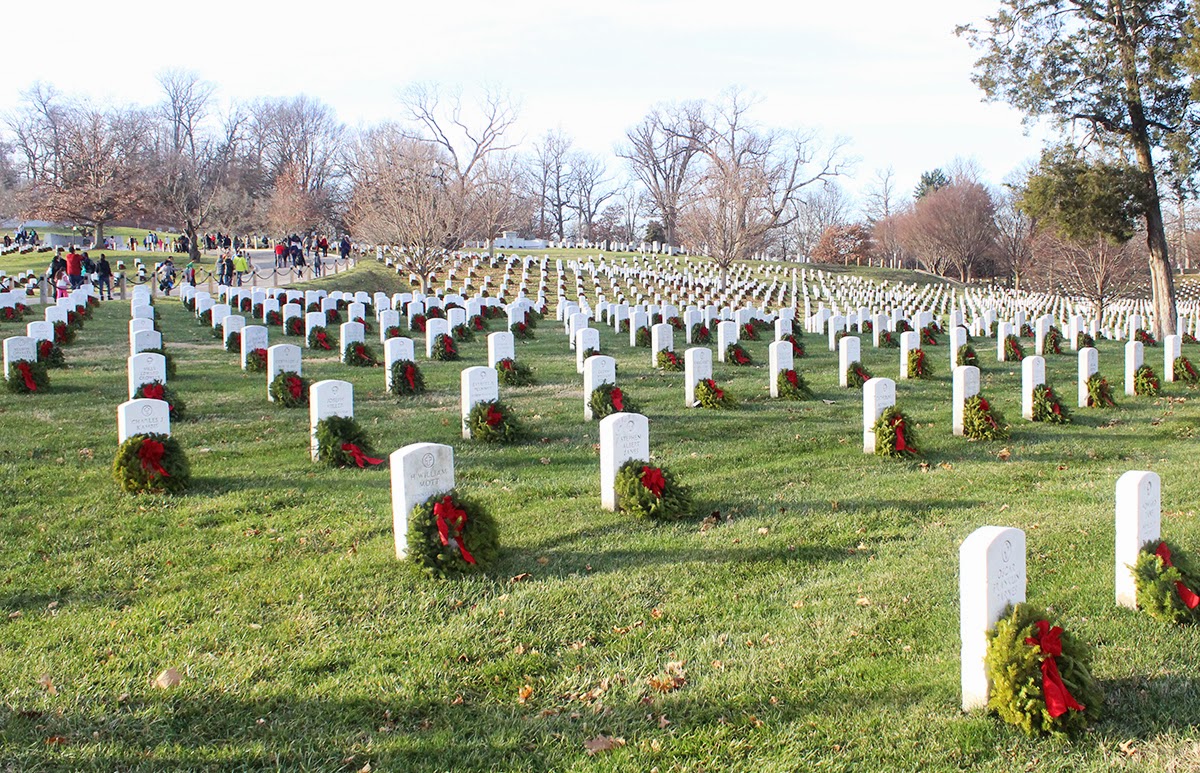 The skies were very clear and the weather was mild that day so we did a lot of outdoor walking that day. We drove to Arlington National Cemetery in nearby Virginia. There were a lot of visitors and the fresh holiday wreaths lent a lighter air to these somber grounds. Rows upon rows of pale rock stretch out as far as your eyes can see and remind us of the less celebratory parts of American history. At the top of the hill, you can go inside Arlington House, the old home of George Washington and later, Robert E. Lee. In all honesty I had never heard of Arlington House nor the connection between George Washington and Robert E. Lee but the quick five minute introduction by the park ranger was fascinating. Even if you don't make it out here to look at the house, just look up the story online. 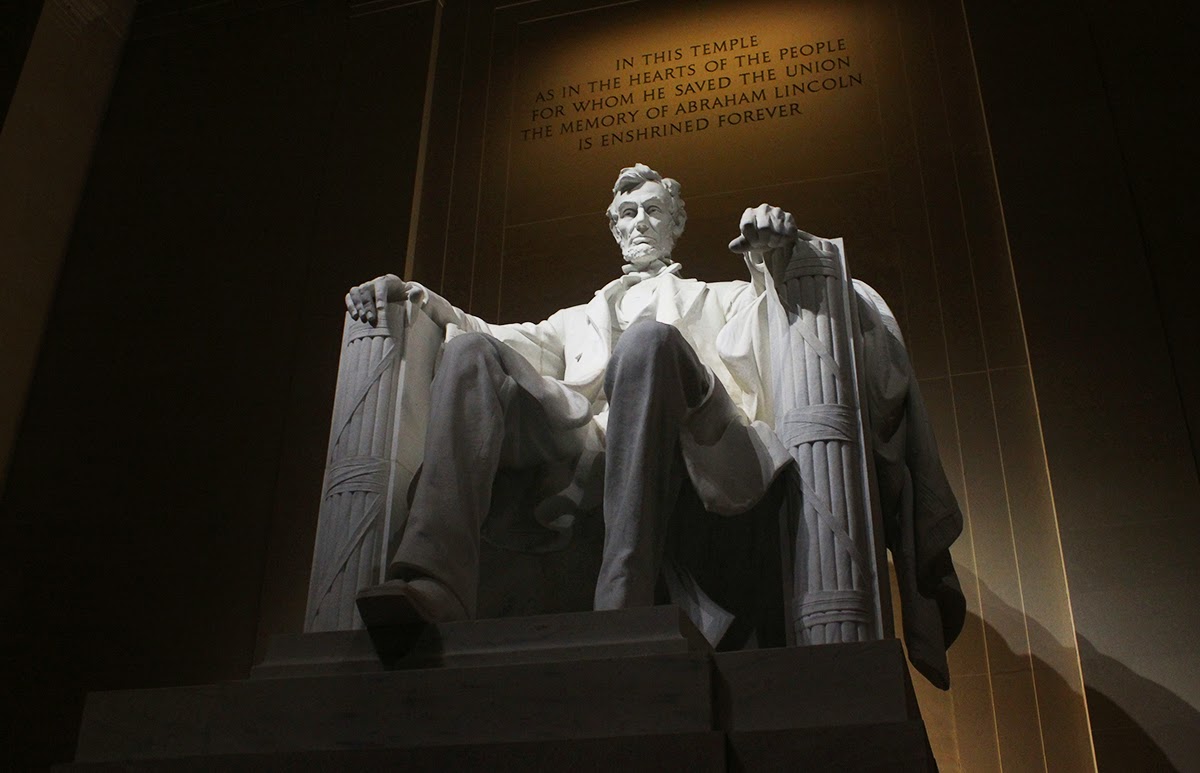 By nightfall we found ourselves at the feet of Abraham Lincoln at the Lincoln Memorial, one of the most iconic monuments in D.C. The white statue almost seemed to glow against the darkness and looking out from the steps you get a perfect view of the Washington Monument and its pale reflection in the Reflection Pool. 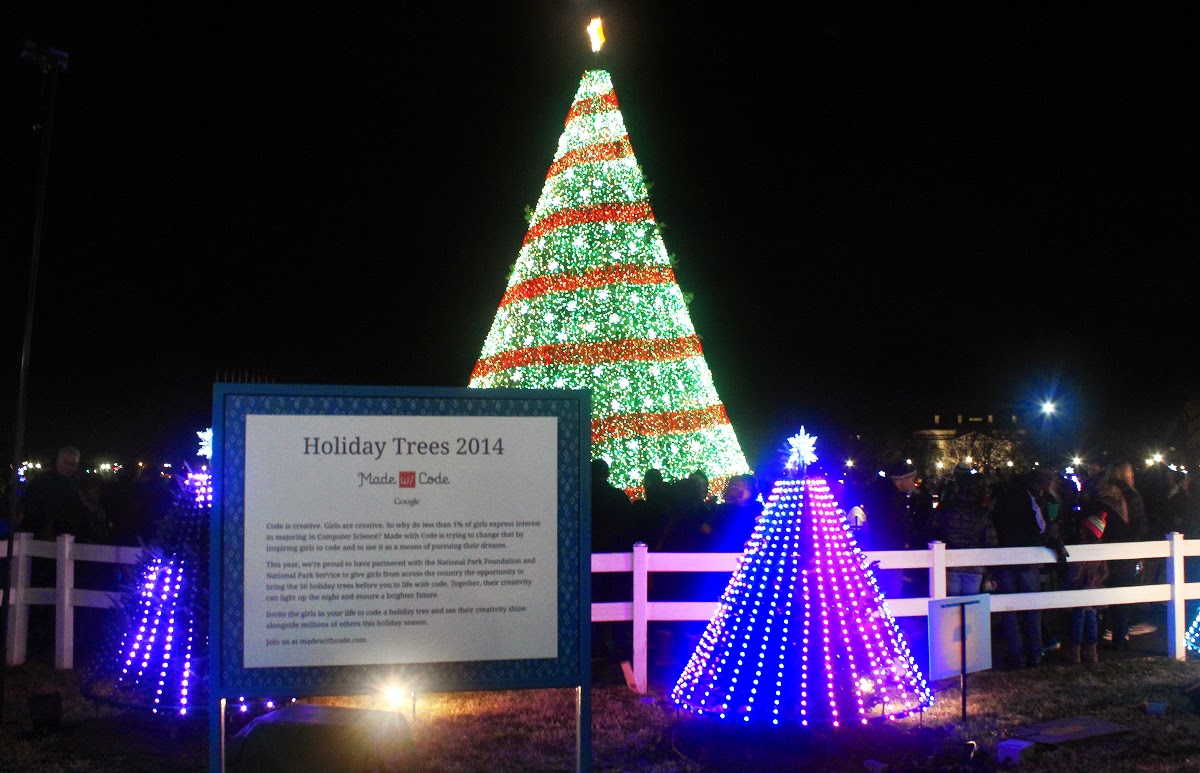 Our last stop was the White House and the National Christmas Tree. I saw the White House years ago when i was a child but both last time and this, we hadn't made plans to take a tour. The building looks surprisingly small from the outside although I think that has to do with how far away the gates are. The Christmas trees draw quite a crowd and the smaller trees change colors and patterns. Each tree had a little sign indicating which state it represented so I assume there were 50 small trees in total. That night my feet were incredibly tired from walking the entire day. Washington D.C. streets are incredibly long and wide so be prepared with good walking shoes if you plan to visit. 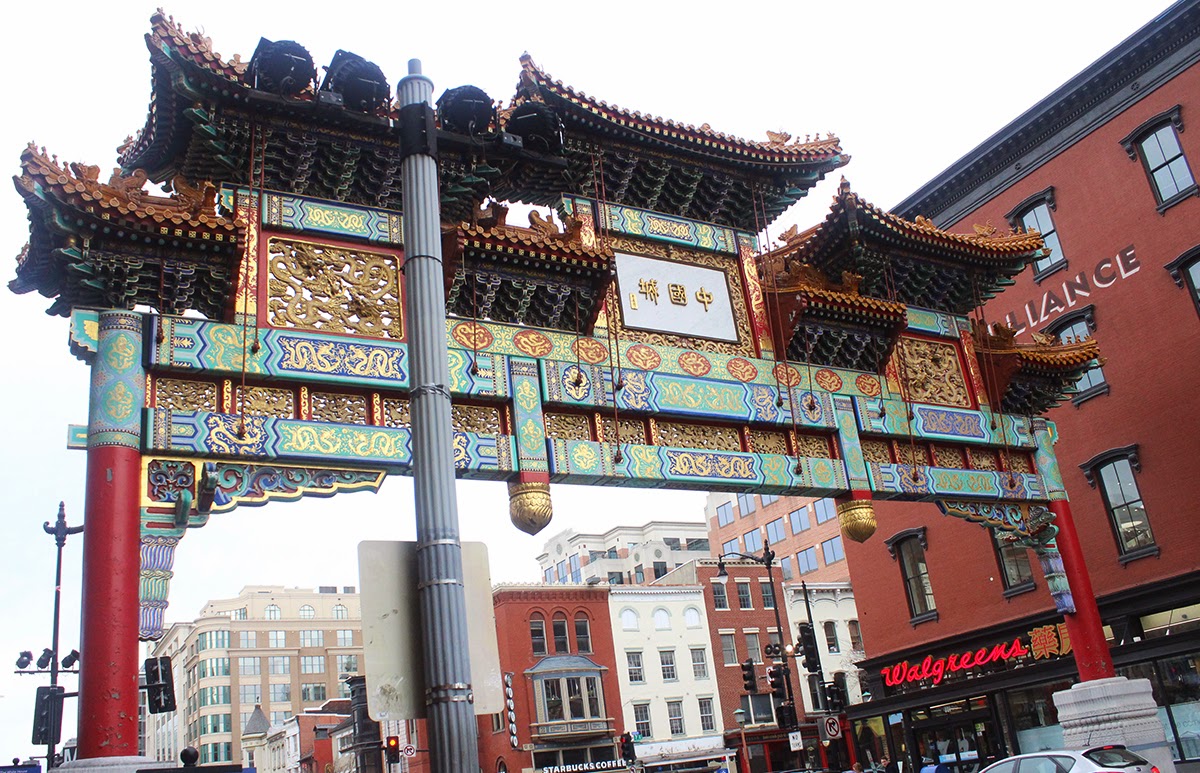 The next morning we headed to see Chinatown which turned out to more like China street. I'm consistently disappointed by the Asian food and culture in other cities outside of Asia. Get ready for some rambling because I just need to vent my frustration about this experience. There are only a handful of Chinese eateries in downtown D.C. and we ended up at Chinatown Express, a dingy place with supposedly rave reviews from the Washington Post. Let me be frank and tell you that this was the worst Chinese meal I have ever eaten in my life. The menu proudly boasts of homemade dumplings but they arrived looking shriveled and broken. The innards consisted of nothing more than two gray pieces of shrimp. The dumpling skin had a brown bottom, indicating the cook had plopped them into the oil before it was hot enough. The xiao long bao, also known as soup dumplings, were equally as disgusting. They were gray, tasteless and worse looking than what you can get in the frozen aisle of a Chinese supermarket. The cabbage lining the bamboo steaming tray looked like it was five days old. I had the duck over rice which was somewhat edible but there was more fat than meat in my serving. I cannot emphasize enough how bad this experience was. The most shocking thing was that there were a good amount of people in the restaurant and they have three stars on Yelp. I don't understand how scores of reviewers compliment the food and especially the dumplings. They must be fake reviews or these people have never eaten a dumpling in their life. I don't tend to write Yelp reviews but I'm honestly tempted to start by writing a scathing review of this sorry excuse for a Chinese restaurant. Afterwards we went next door to pick up some Chinese bread in case we got hungry later in the day. The buns were standard and decent but the price was double the price of what you'd find in New York. Do yourself a favor and skip Chinese food while you're in D.C. 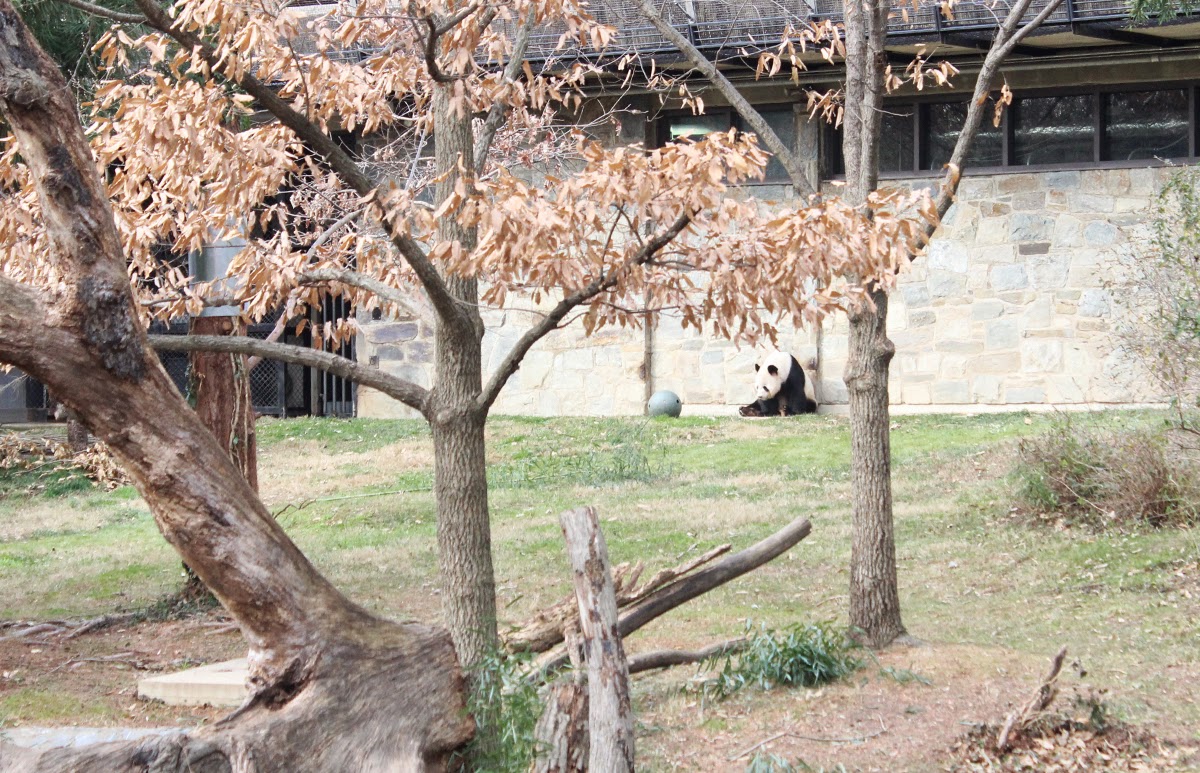 For the rest of the afternoon we walked through about half of the National Zoo because I wanted to see the giant pandas. I have mixed feelings about zoos but felt that the opportunity to see a panda was one I should not miss. Luckily, one of the pandas, I'm not sure which, was outside despite the dreary weather. I noticed a lot of the animals looked incredibly dejected and bored. The panda sat very still, hunched down, and went inside from time to time. The gorillas were a very sorry bunch and I felt guilty observing them. The bison had a pitifully small enclosure, especially considering their size and the great plains that they naturally dwell in. Only the otters looked like an active bunch. I could be totally wrong and attributing feelings to these animals that aren't there but I didn't leave the zoo with a good sentiment. 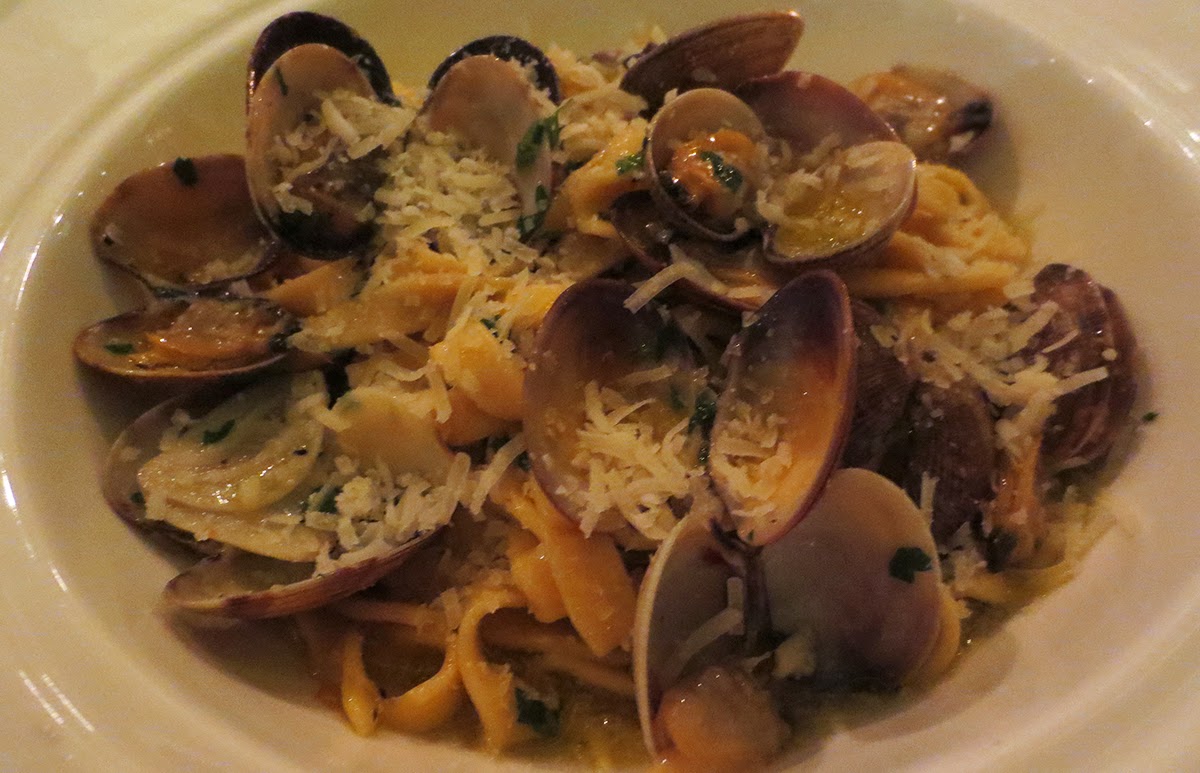 To end our last evening in town, we drove to Georgetown which I read was a nice neighborhood. I was surprised to see a cute town by the water that reminded me of a cleaner, more rustic version of Soho with it's many shops. I had planned to have dinner at Filomena, an Italian restaurant with more than 30 years under its belt, but the wait time was about three hours. Clearly it's a popular place that I'll have to try next time around. Instead we walked about until we stumbled upon Rialto, another Italian restaurant that seemed passible given our hunger at the time. For about $25 you get a soup or salad, a pasta or pizza and a dessert. Quite a good value and the food was pretty tasty. I had housemade fettuccine with clams and white wine sauce. The sauce tasted more of olive oil than white wine which is my only minor compliant. Overall, a good value although the decor of the restaurant was some new age glamour theme that was a bit gaudy, if not interesting.

My weekend was quite eventful and oh so tiring as well. I definitely could have squeezed in a few more museums and monuments to the second day but my feet were pretty tired and this trip was meant to be relaxing as well as educational. Happy to report that I think this weekend did the trick and I'm looking forward to wrapping up 2014 with some tranquility at home. Have you been to Washington D.C.? What are your favorite sights in the city?
Labels: food travel