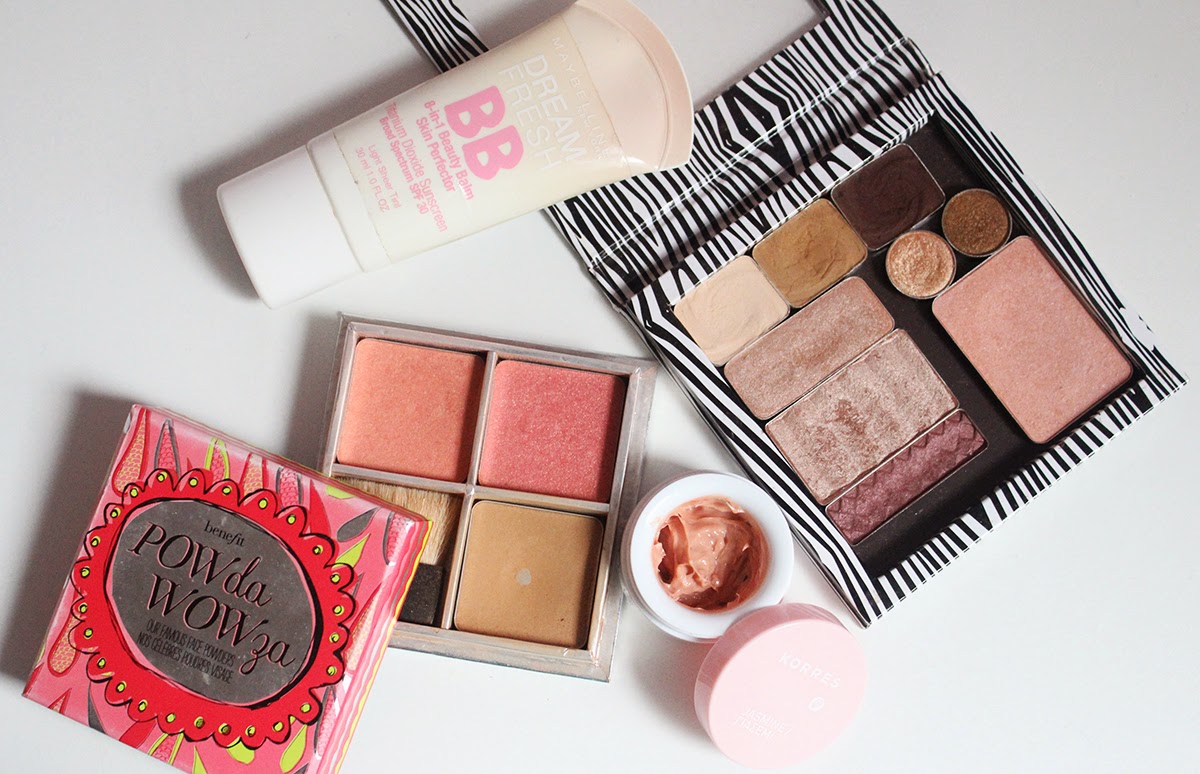 At the beginning of December, I took on the Project Make a Dent challenge, not knowing how successful I would be at sticking to a handful of products for an extended period of time. Not surprisingly, I haven't made a ton of progress in three and a half months although that doesn't mean I haven't made any.

One product has completely vanished from the picture, the Physician's Formula Gel Liner became too dry and flaky after awhile and I had used up most of it. I threw that away and started using the Mac Fluidline in Blacktrack which I'm enjoying much more. I've used the Korres Lip Butter in Jasmine maybe a dozen times or so and it looks the way it does because I wanted to get a better idea of how much product I had left in the tub. Turns out I have a lot more product left to whittle down. 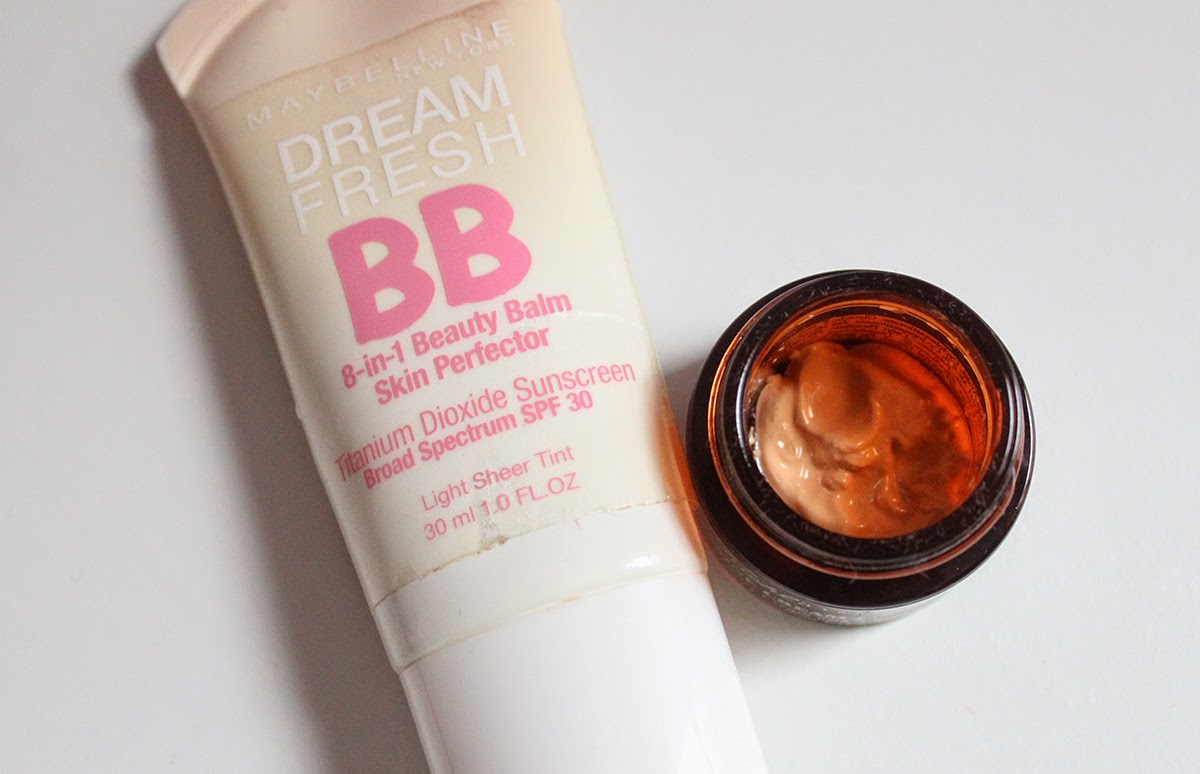 I haven't used the Maybelline Dream Fresh BB Cream much but somehow I've used up almost all of it and only have a bit left. I squirted it all out into a tiny sample jar to see how much I had left. I like to mix this BB cream with other foundations and BB creams to get a bit more coverage and staying power. I'm excited to finally chuck this empty tube and it's rare for me to finish a base product in its entirety. 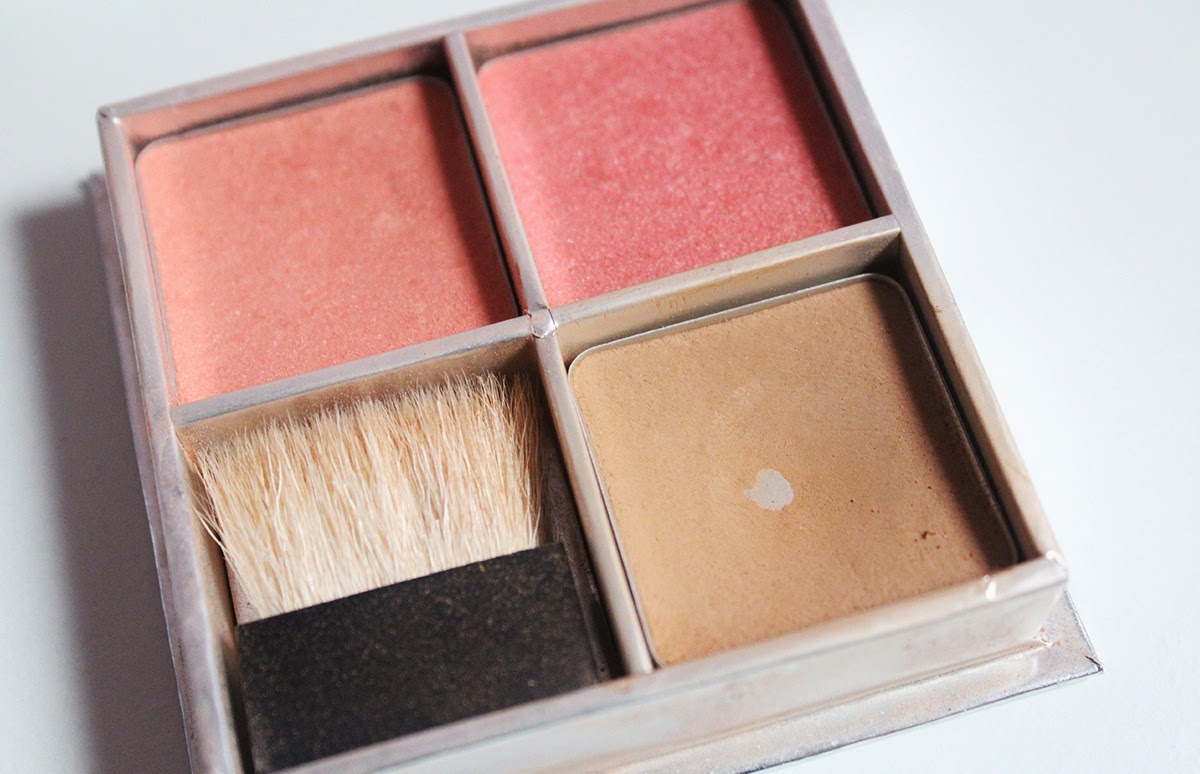 Now for something more exciting: pan! After months of dedication toward Benefit's Hoola Bronzer in the mini size, I finally hit pan last week. Since I took the picture a few days ago, the pan has gotten a bit bigger. This is the Benefit Powda Wowza Palette which came out a few years ago. I've been using Coralista, the peachy shade, quite often as well and suspect pan is not too far off. Even though these are only .1 ounce pans, they last a very long time, even when I generously load up my brush with product. I still think Benefit's powders are too powdery for a high end product but Hoola has grown on me and is a nice contour shade for my complexion. 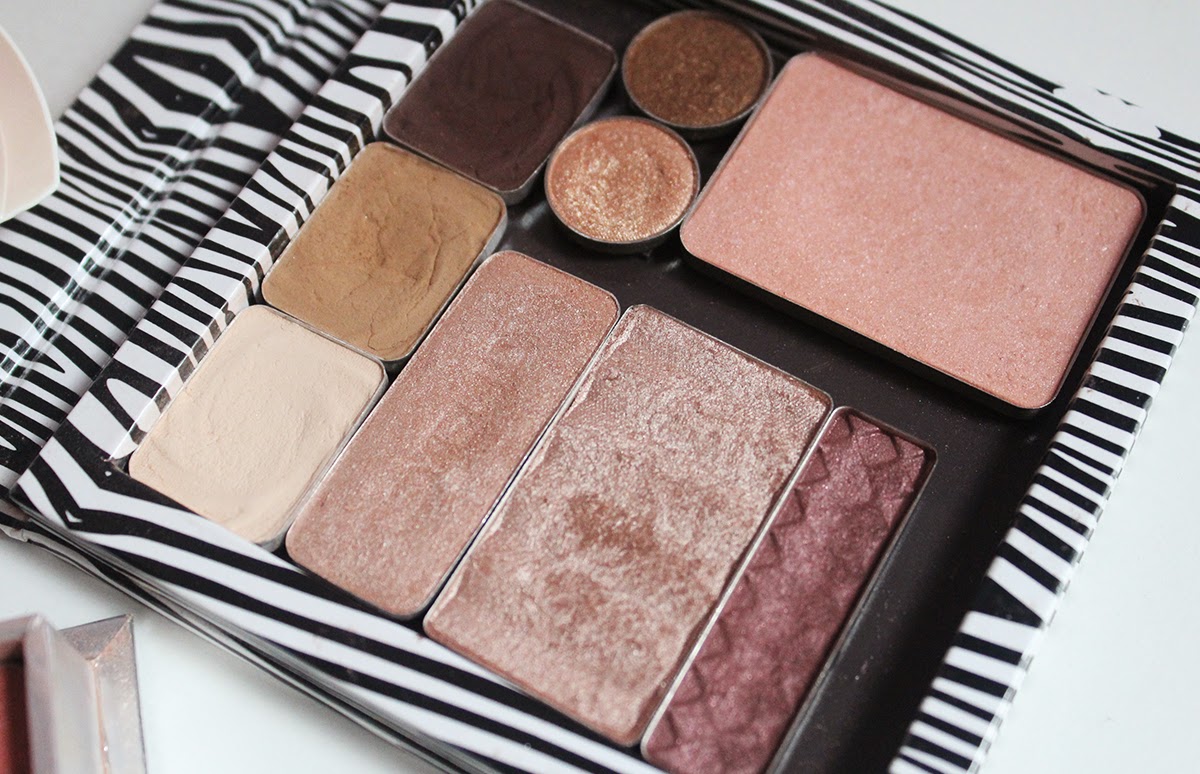 I switched up some of the shades in my Z-Palette since my initial post. I kept the Rimmel Santa Rose Blush, Wet n' Wild matte eyeshadows, shimmery peach Wet n' Wild shadow and Revlon burgundy shade. At one point I put in a few Mac eyeshadows as well. I was very loyal to Santa Rose for a few weeks because it goes with everything and is a pleasure to use. I've used enough of it to the point where you can't see the crown logo anymore. The large neutral shadow pan is Revlon's Nude Slip, one of my all time favorite eyeshadows ever. It's a shame that Revlon discontinued this color because it looks stunning. The formula is velvety smooth and the shimmer is refined. It seriously rivals my high end shadows and I can't get enough of it. I wouldn't say I've made a dent in Nude Slip but you can definitely tell it's gotten some love.

I'll do another update in a couple of months and hopefully by then Hoola will be completely done and I can add in a new bronzer to this challenge. I don't think I've slowed down the rate at which I'm accumulating products but at least I'm using some up!