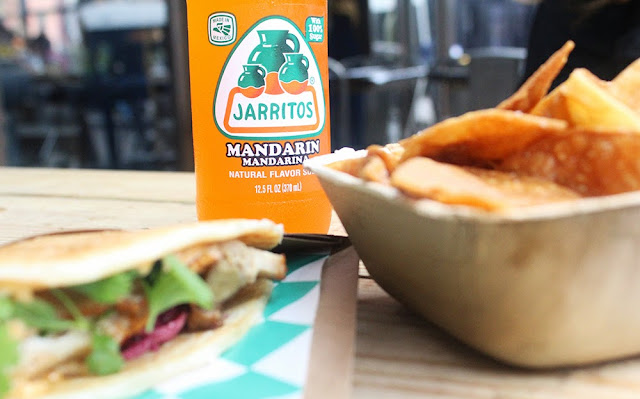 Has it been years since I shared a lifestyle, food - intensive post? I've been eating my way through the city I call home more than ever but I haven't been in the mindset to take pictures of everything lately. This past Saturday I spent the entire day milling about Manhattan meeting up with a good friend I haven't seen in months, exploring familiar nooks by myself and enjoying a delicious meal with my boyfriend. Here are a few snippets of my day. 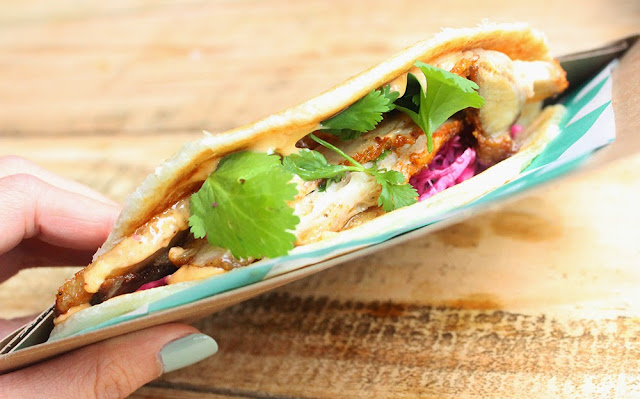 First up, lunch at Goa Taco,  a hole-in-the-wall joint down on Delancey recommended by my friend. Their unique factor is that they substitute a tortilla with an Indian roti. I had the pork belly taco with red cabbage slaw and it was delicious. It's a little out of the way for me but if you're ever in the area, perhaps waiting for your tour at the Tenement Museum right next door, I'd recommend a pit stop. 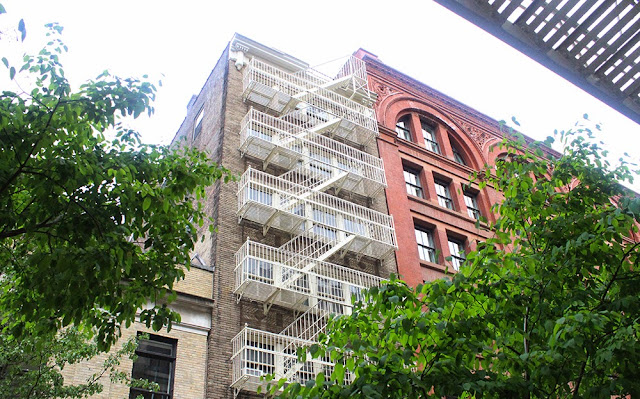 My friend and I then sauntered down to Soho where we then parted ways and I roamed around familiar streets and did some window shopping. I have to admit I spent most of my time perusing the aisles of Sephora, swatching things I've never swatched before. I go through phases where I'm all about buying clothes or buying beauty products. For the past month or two, I've been solidly in the beauty category. 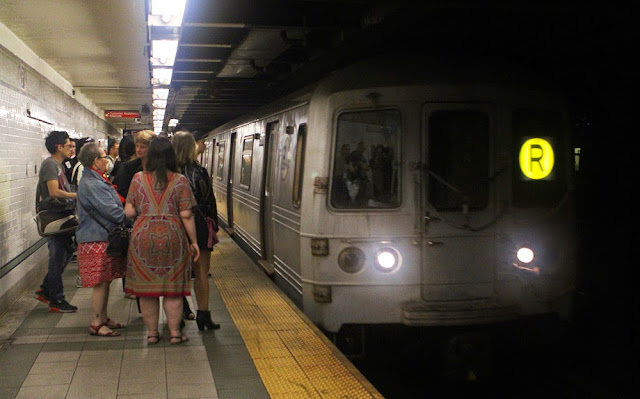 On a nice day I usually just walk from Soho to Union Square but it was muggy that day and I had a feeling my feet were going to bother me later so to the R train I went. It definitely helps to have an unlimited metrocard in the city because a single ride now costs $2.75. When I was born in 1992, the cost was less than half of what it is today.... Another thing to grumble about as a New Yorker. 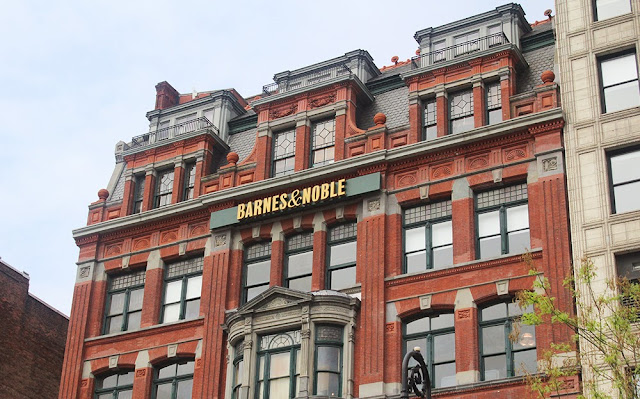 Truth be told, I don't buy a lot of books in-store anymore but I try to order online from Barnes & Noble because I appreciate having a library-like environment in the chaos of the city. I don't know if my online purchases help the brick and mortar locations at all and if anything, it probably hurts them. But it's sort of ridiculous that the books are always at least 30% cheaper online than in the store....

I had a few hours to idle on my own so I read through sections of Malcolm Gladwell's Outliers and wandered into the travel section where I scoped out guides for Norway and Sweden where I'll be visiting in June. I've never brought a guide book with me when traveling but just flipping through the pages made me overwhelmed. 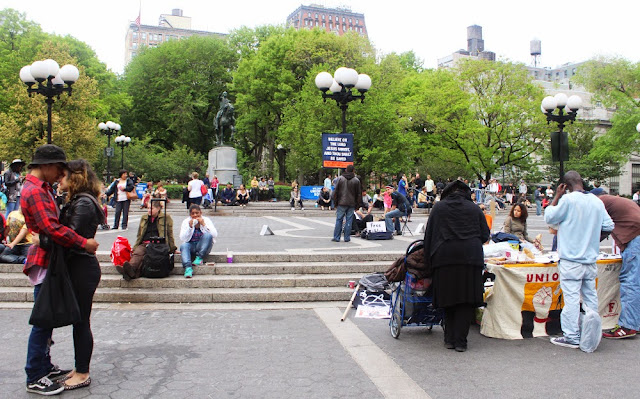 The Union Square neighborhoods is one I tend to pop by often because it has a variety of shops I like to browse and it's a convenient walk to Soho or up to Flatiron and Herald Square. But over the years the park itself has become less and less welcoming. Has there always been so many homeless people in the area and have I just been blind to it in the past? Out of towners, I'd like to hear what you thought about the streets of New York when you visit. 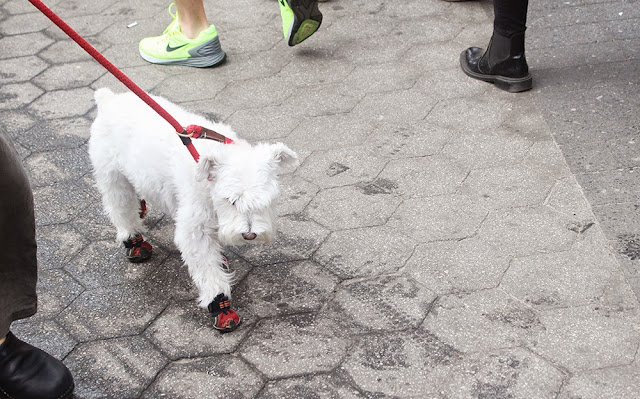 I think dog watching might be more fun than people watching. Just look at this guy in his fancy kicks! If you ever walk around with me, you are guaranteed to hear no less than five gasps of "look how cute!" from me about a four legged friend. 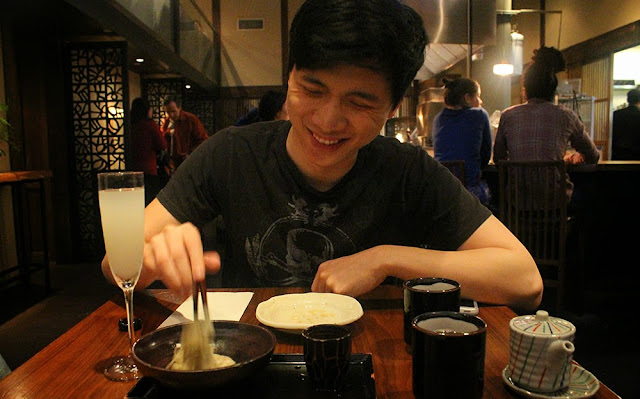 Dinner time rolled around and my boyfriend and I booked it to Ootoya, a Japanese restaurant that always has a ridiculous wait time. I've eaten here two times prior and the last time we had to wait something close to two hours. Luckily we arrived right at 6:00 pm and were told there was only a 30 minute wait. For restaurants that aren't so good I probably would have not waited but for Ootoya, it's worth it. 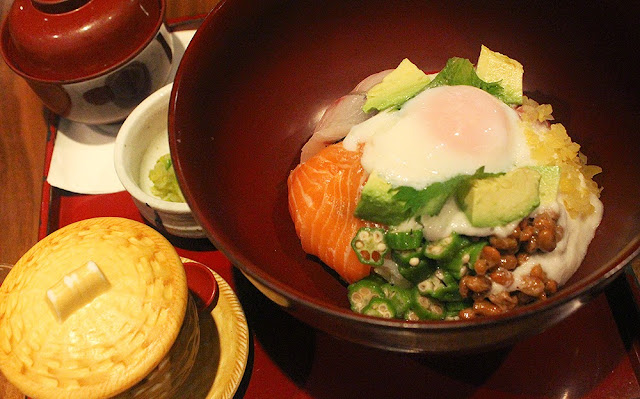 Ootoya is a Japanese restaurant which might make you think immediately of sushi and udon but there's actually very little sushi and much more than just noodles. They offer many set meals that come with soup, pickled vegetables, rice and steamed egg. My boyfriend chose a rice bowl set that came with sashimi, okra, avocado, natto and a soft boiled egg. The prices are very reasonable for the amount and quality of food. 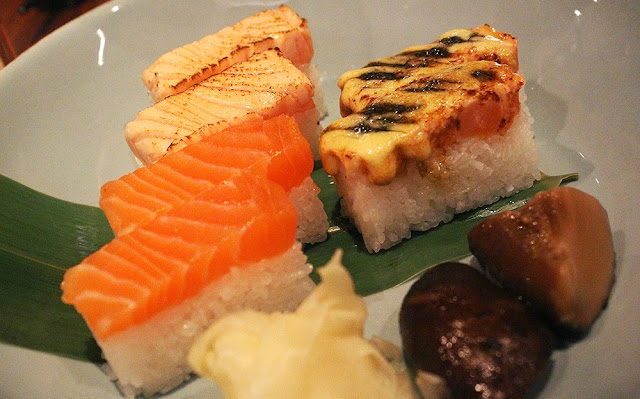 For a starter we tried something neither of us had tried from Ootoya, pressed sushi. There was salmon prepared three ways, firmly pressed atop slightly sticky rice. Delicious! The shiitake mushrooms on the side were incredibly sweet and tasty as well. 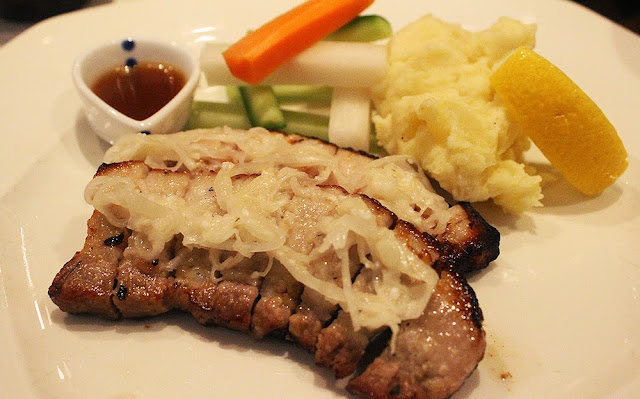 For my entree I chose the silky pork set which is a delicious cutlet of juicy, melt in your mouth pork. It looks like a really tiny portion but I had already consumed some cold soba, the sushi and given the potato salad, rice, soup and steamed egg, I was stuffed by the end of the meal. We also ordered black sesame ice cream and fiji apple ice cream to cleanse our palates. The black sesame was fantastic but I'd skip the fiji apple flavor next time because it tasted exactly like school apple sauce. Aside from the unfortunate apple ice cream, everything else was great and I know I'll be coming again in a few months. 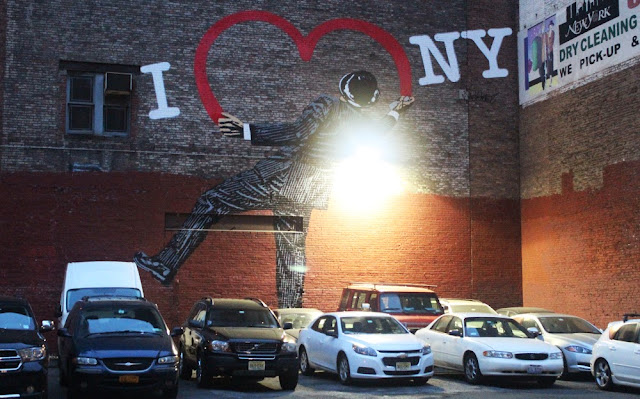 After that indulgent dinner, we made our way to the Highline a few avenues away. We chanced upon this cool mural in a parking lot and I thought it looked like something out of a movie. 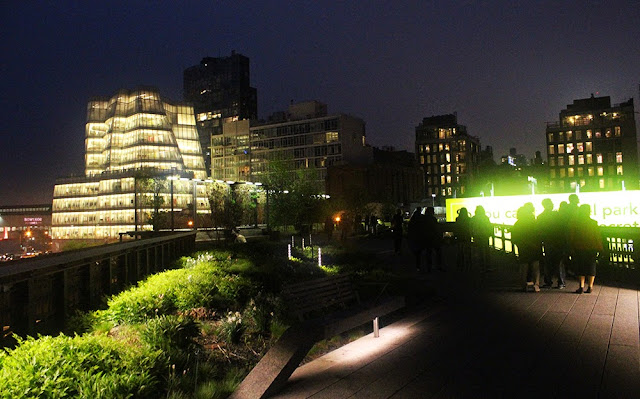 The Highline during daytime makes for a brilliant stroll but the Highline in the evening transports you to a futuristic setting. The nearby luxury condos and subdued neon lights make for an interesting combination. We walked 15 odd blocks on the Highline and studied the apartments we probably will never be able to afford (we're talking one bedrooms for $2 million here) and people watched. 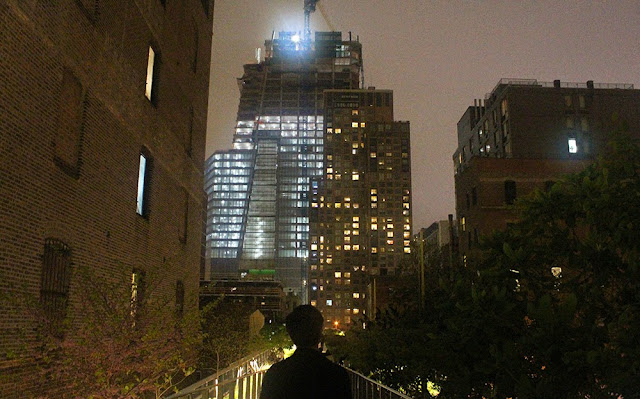 There is a lot of construction and development happening on the West Side and I wonder how so many people can afford these rents. Since graduating from college last year and starting a full time job, I've gotten a lot of questions about when I plan on moving out and to be honest, I'm not in a huge rush. Perhaps it's because I'm Asian and there's not a strong stigma against living with your parents. But the bigger reason is that it makes little sense for me to shell out more than half of my income to live in a substandard shoe closet on the outskirts of the city all in the name of being a proper adult. Here's to hoping that with a few more years of diligent work, maybe there's a chance I can afford a decent place to stay....

Hope you guys liked this little catch up or at least appreciate the food pictures! What's been on your mind recently besides the latest beauty collection? Any life advice for a young twenty something year old? I'm all ears!
Labels: about me food