Tarte Gift or Get Set: First Impressions and Swatches 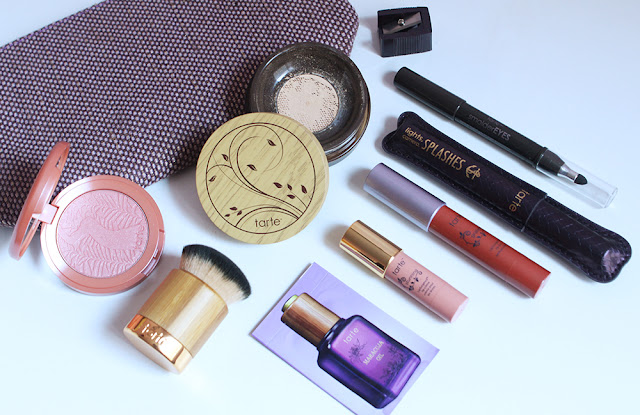 First off, happy Thanksgiving to my fellow Americans! I have so much to be thankful for and I hope you all are having a great day. I debated writing this post today as I hope everyone is spending lots of time with family and friends instead of combing through blogs. But I have some time on my hands and Tarte is having a 25% off promotion through tomorrow so I thought this might be helpful.

A few weeks ago Tarte had a Gift or Get Set promotion: six full size items, a cosmetics bag and a mini lip creme and foil packet sample for $59 + tax. What drew me in was that you could choose from a variety of shades in each category as well as the brush. I've had my eye on the Amazonian Clay Full Coverage Airbrush Foundation and the accompanying Airbuki brush which are normally $36 and $28 respectively. So I thought it was a good deal that i was essentially getting both of them in addition to four full sized products. 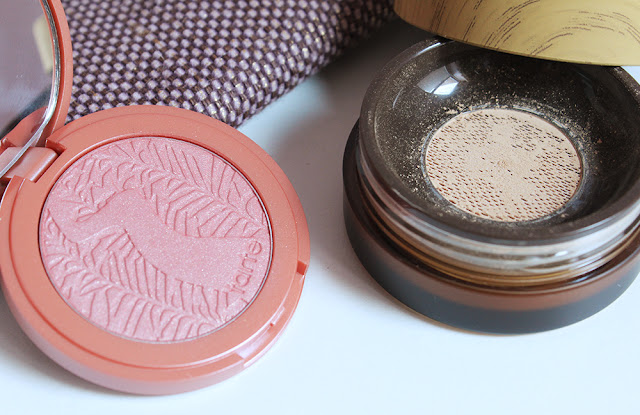 I wasn't impressed by Tarte's holiday blush palette so I was curious about how I'd like their full sized blushes that are manufactured in the U.S. instead of China. I chose the shade Peaceful which is a very shimmery coral. On Tarte's website Peaceful is described as a soft nude peach and the stock picture has no shimmer but the one I received has tons of golden shimmer. These retail for $28 which I think is a lot for a midrange brand like Tarte. Just my two cents.... The blush is pigmented and if I tap off my brush I can minimize the amount of shimmer on my cheeks. It's not the most blendable blush and this shade is definitely not a "soft nude". I'm still not entirely sold on these blushes so I won't be getting more of these in the future.

I chose the shade Fair-Light Neutral for the powder foundation and it matches me well. I've been trying to minimize my everyday makeup routine and this gives me enough coverage to minimize redness and discoloration in one step. I wouldn't bill this as a full coverage foundation and it can highlight dry patches. You definitely want t moisturize well beforehand and I still prefer to use concealer under my eyes and on blemishes. I really like the unique mesh packaging because it prevents powder from flying everywhere and it works perfectly with the Airbuki brush.

The Airbuki brush works great with the packaging of the Amazonian Clay Foundation but it's not worth $28. It's a reasonably soft and very dense synthetic brush but not anywhere close in softness to natural fibered Japanese brushes. The Airbuki works well for buffing loose powder in small circular motions but the short bristles and density make it hard to blend out large areas quickly. 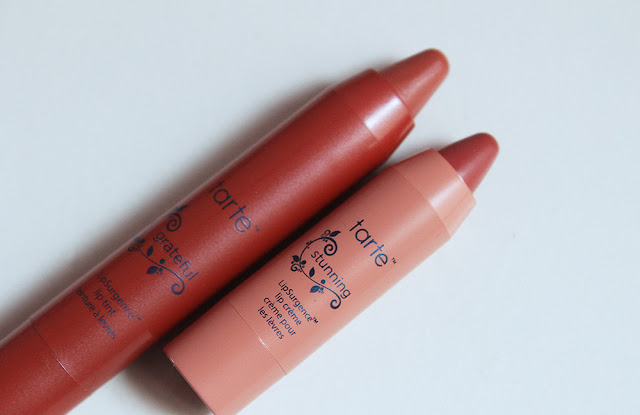 For the full sized LipSurgence Lip Tint I chose the shade Grateful, a natural nude that I can wear with anything. I like the Tarte LipSurgence Lip Tints but not the glittery nor matte ones. The complimentary mini is a LipSurgence Lip Creme in Stunning which is also a nude but with much more pigmentation as you'll see in the swatches. 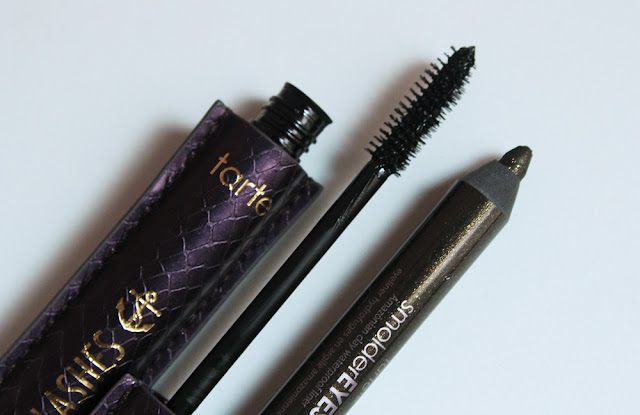 I was excited to see that one of the mascara options was the Lights, Camera Splash Waterproof Mascara as I only use waterproof formulas. Unfortunately I tried this once and found it wasn't good at holding a curl and didn't provide much volume or length. I've already passed this on to my cousin and am making a mental note to just stick to my beloved L'oreal Voluminous Waterproof Mascara. Lastly there was a choice of a few SmolderEyes eyeliners. I chose the Golden Black shade because I thought the pencil was the size of a regular eyeliner but it's actually more like a chubby eyeshadow crayon. I'm going to try using it to do a smudgy smokey eye but if it doesn't work out I'll be passing this on. I will give credit to Tarte for including a sharpener with the pencil which is always helpful. 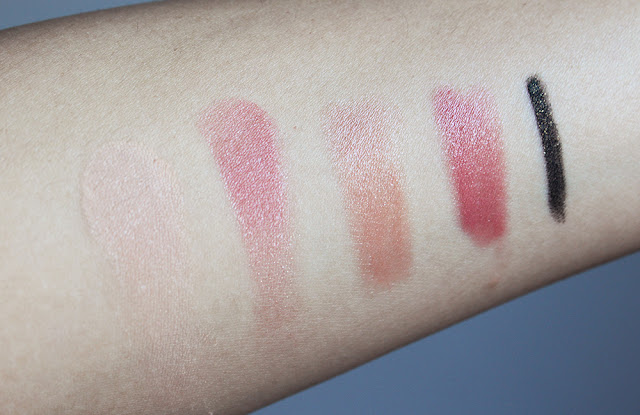 Here are the swatches of all the products. From left to right is the foundation, blush, lip tint, lip creme and eyeliner. The foundation pulls a bit pink but once on my face and blended out, it matches well. The blush swatch is obviously a heavy swatch but it's still rather bright on my skintone. The two lip products look similar from the tube but once swatched you can see the tint is a sheer nude whereas the lip creme looks like a pink lipstick. The eyeliner is loaded with glitter but could be fun for nights out (not like I have many of those).

All in all, I like the foundation enough to not be disappointed in this purchase but I'm still not blown away by Tarte. There's a lot of hype around the brand on social media and I admit their palettes are very tempting. But given the price point, I think I'll be holding off on adding anymore Tarte to my collection for the time being. What do you think about Tarte? Do you have any favorites from the brand?
Labels: blush brushes eyeliner foundation lip balm powder swatch Tarte