Panning Lately: From Dior to the Drugstore 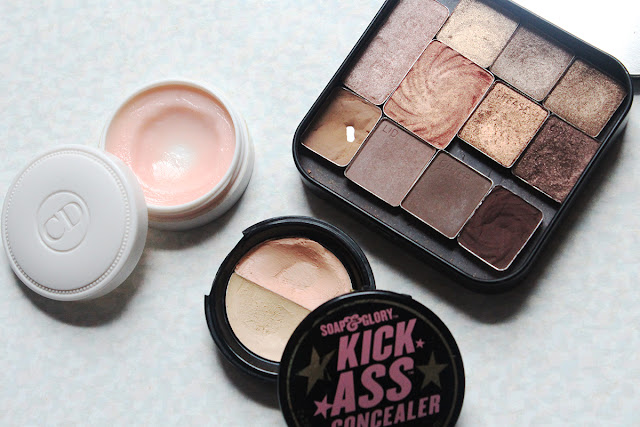 Having amassed more makeup than I realistically can use up, I frequently change up my routine to keep things interesting. So it's not very common that I hit pan, much less use up an entire tube or compact of something.

There's a happiness that accompanies the elusive sliver of shiny pan. To me, it signifies money well spent and it frees up room in my makeup inventory. I mentioned at the beginning of the year that I wouldn't be embarking on a particular Project Pan or Use-It-Up type challenge. But these three products have been living on my vanity recently and they've been surprisingly easy to pan since I've been relying on them so much.

I've been using the Dior Creme de Rose Lipbalm every morning because it moisturizes my lips and has SPF. This is kind of a cop out because it's kind of more like skincare - but I want to include it here anyway. It's great by itself as a lipbalm and under lip products as well. At $28, I'll likely look for a less expensive lipbalm when I'm done with this one though. But if I don't find something else that I like better, I'd consider getting this again. It smells nice but not overwhelming and the texture is emollient without being too slippery or sticky at all.

I dug out the Soap & Glory Kick Ass Concealer a couple weeks ago and have found it hard to put down. It's actually surprising because when I reviewed it back in 2014, I gave it a very lackluster review. Since picking it back up, my tune has definitely changed regarding the salmon toned under eye brightening shade. Back when I first used it, perhaps because I was living in a colder climate, the concealer took a lot of work to blend. The last few weeks have been quite warm so the concealer is a lot more creamy and easy to apply - it literally disappears under my eyes and takes most of my undereye darkness with it! I probably will have to put this concealer away again soon as I get some more color and the shades become too light. I still don't love the regular toned concealer nor the powder so I won't repurchase this little kit. I have a stashed away Tarte undereye corrector that looks like a good replacement so I'm excited to start using that once I've finished the Soap & Glory one.

Last, but certainly not least, I'm pretty surprised that I hit pan on an eyeshadow! It's really rare for that to happen because I simply have so many eyeshadows. The shade I've hit pan on is the midtone matte brown shade from the Wet n' Wild Vanity Palette which was discontinued. I actually talked about this shadow last year and declared it one of my favorite matte brown eyeshadows. You can see based on that post how much I've used of the shadow in a year - granted I don't wear eyeshadow everyday and don't always use this one when I do. It's kind of ironic that I reach for this shadow so often when I have high end shadows that have cost me way more that I hardly use.

That's my little pan update! It's more of a reference for myself than anything else. But I know some people also find enjoyment in seeing panned makeup, whether they're looking for reviews, inspiration or encouragement. What was the last makeup product you hit pan on? Do you also get excited when you make progress when using up products?