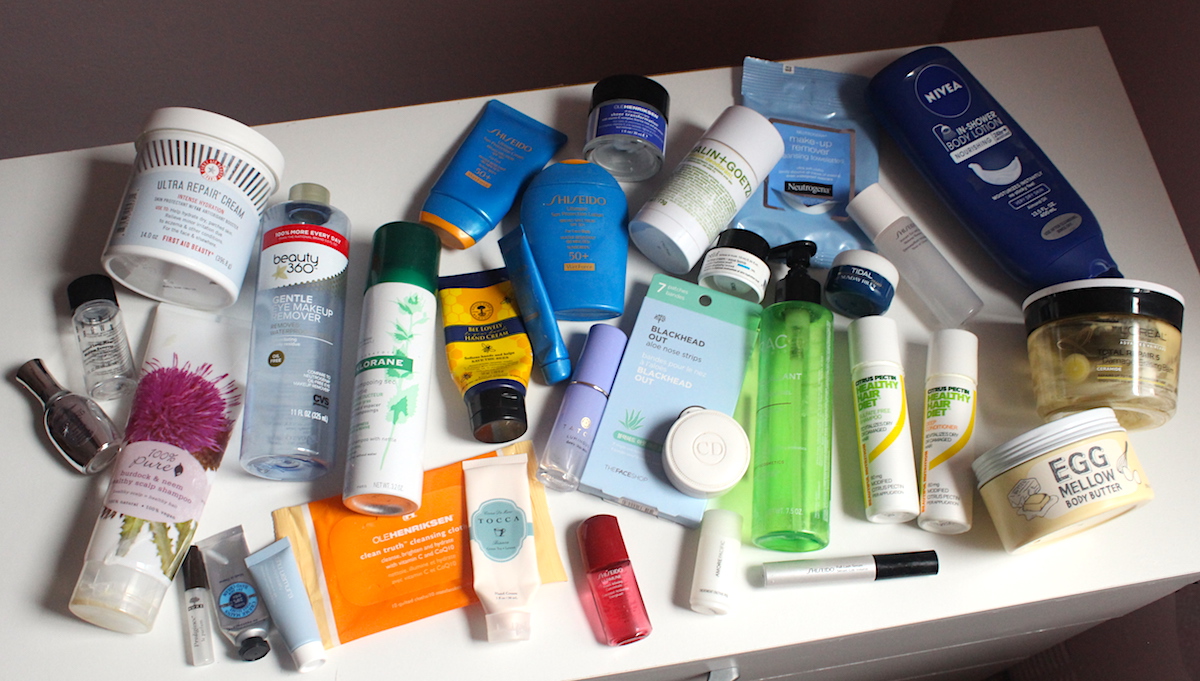 My pile of bottles, tubes and other empties has been growing in the corner of my room and I knew I had to make a point to recap the things I've used up soon. The end of February came and went and I didn't have time to do my usual bi-monthly update so here it is a month late. At this point I might as well do empties posts quarterly instead of bi-monthly. We'll see if I can stand the huge pile of garbage accumulating every three months....

I'm definitely seeing a pattern when it comes to certain products. I've used up many a tub of First Aid Beauty's Ultra Repair Cream and Shiseido sunscreens are something I always go back to. I finally used up pretty much all of my Malin + Goetz Deodorant (what little that was left fell out of the tube and onto the floor so I just chucked it) and I've already repurchased it. Another repurchase I've already made is the Dior Creme de Rose Lipbalm which I originally said was too expensive but it's actually the perfect daytime lipbalm. I also love the Shiseido Full Lash Serum which I also have repurchased and need to buy another backup soon.

Now let's talk about a couple of things I tried for the first time and enjoyed. The Bobbi Brown Instant Long-Wear Makeup Remover is the best eye makeup remover I've ever used. It just takes everything, including waterproof mascara, off so easily. It's very expensive for how much you get (and eye makeup remover is something I run out of pretty quickly) which is the only reason I wouldn't repurchase this in a heartbeat. I have a pretty problematic scalp so I bought the 100% Pure Burdock and Neem Shampoo which is supposed to help with dandruff. I think it helped somewhat and I would consider repurchasing it in the future. I also really liked the Beautiful Nutrition Healthy Hair Diet Shampoo and think that might be my next shampoo purchase after I finish my current one.

As for things I really didn't care for, the super hyped up Tatcha Dewy Skin Mist failed to impress me. The full size mist retails for $48 but I just don't see what everyone loves about it. I'm actually a little glad I didn't like it because that saves me $48. The Lierac Cleansing Gel, which I received as a press sample, has been in my bathroom cabinet for a long time and I'm glad it's used up. I used about half the bottle to wash my face but found the strong fragrance off-putting and it was somewhat harsh on my skin. I used the rest of the product to wash some of my makeup brushes. 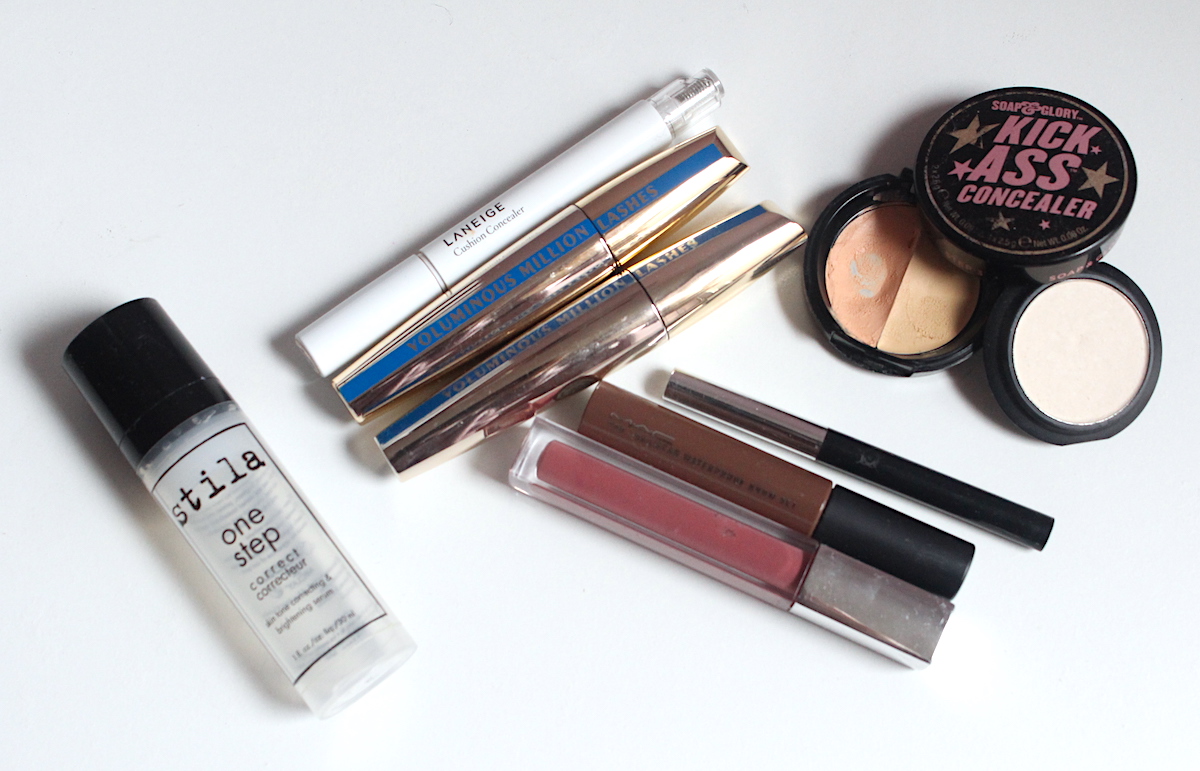 I have a couple of makeup empties this quarter which is nice to see. I finally finished the Stila One Step Correct Primer which is the clear one with the different colored swirls. It was a meh primer that didn't really do much for my skin besides adding another layer to separate my skin from my base makeup. I received it as gratis from when I worked in the beauty industry which is the only reason I had this primer. I finished another Laneige BB Cushion Concealer which has been my go-to under eye concealer for several years. It's no surprise I went through two more tubes of L'Oreal's Voluminous Million Lashes Waterproof Mascara since it's my favorite mascara. I've probably gone through at least 10 tubes by now. Every time the drugstore has a 40% off promotion on L'Oreal, I make sure to stock up on a couple of tubes of this mascara. I finally finished the Lioele Eyebrow Pencil that I bought in Hong Kong back in 2013. More than once I questioned what sorcery was behind this eyebrow pencil that never seemed to end. Towards the end I realized this eyebrow pencil was a touch too dark for my liking and so I won't be repurchasing it. I also used up a Mac Pro Longwear Brow Set which was decent but the color was too warm for my brows. I'm currently pretty happy with the brow products I'm using so I'll have to do an update on that soon.

The only products that aren't used up that I'm tossing are the Soap & Glory Kick Ass Concealer and the Maybelline Colorsensational Lipgloss in Mirrored Mauve. The concealer is from 2013 and while it's still usable, the packaging is utterly broken and it's a pain in the butt to use. I did like the salmon shade for under my eyes so at least I hit pan on it. I didn't care for the other concealer shade nor the powder at all. The Maybelline lipgloss is actually one of my favorite lipglosses ever but it's starting to smell a little different so in the bin it goes. Unfortunately it looks like they've discontinued that line of lipglosses so I won't be able to replace it with a new one.

Being away from this space has made me quite a rambler, eh? Hopefully I didn't put any of you to sleep (unless you're reading this before bed, in which case, you're welcome). I have a couple of post ideas floating in my head but, to be honest, not enough drive to follow through on photographing and writing everything. I've been keeping pretty busy in pretty much every facet of my life other than my blog presence. I'm hoping I get bitten by the blogging bug again soon so I can muster up something worth posting! If you have any ideas or suggestions, feel free to shout them out on Twitter or Instagram (@Karyi12)!