I'm happy to report that my beauty no-buy is going strong and I'm pretty certain I'll be extending it through the end of September. Besides obviously having way too much makeup (what else is new?), I want to save some money now and wait for the holiday sets and deals to purchase things I've had my eye on.
I picked up a few of the new(ish) Maybelline Lifter Glosses last month right before I decided I needed to put on a hold on my beauty spending and I'm so glad I did. I paid around $6 per gloss from Ulta (always look for coupons!) and the formula of these is indistinguishable from higher end glosses.
I went back and forth for awhile over whether or not I should be buying lipgloss right now, given the fact that I'd be wearing a mask outside. But all the positive online reviews got the best of me and here I am wearing lipgloss at home for virtual work meetings. 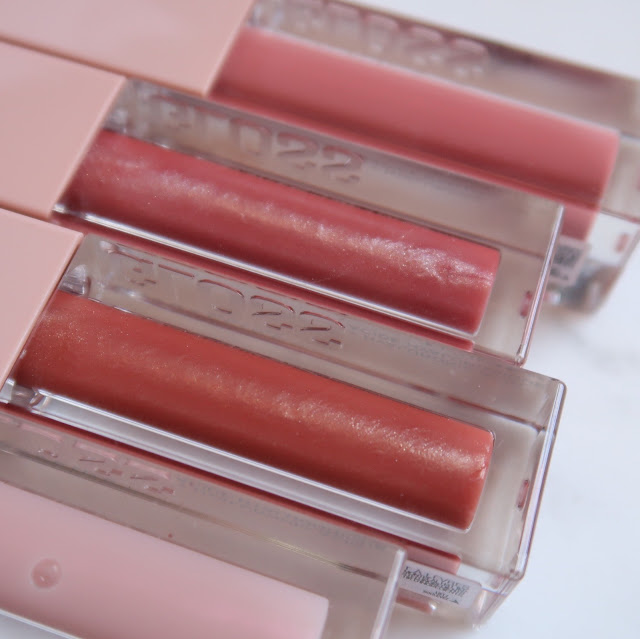 There are 10 neutral shades in both cream and shimmer finishes and they are exactly the shades I gravitate towards in terms of lipglosses. I exercised some restraint and picked up four shades: reef, moon, topaz and ice. I actually purchased the shade stone instead of ice but Ulta sent me the wrong one and I was too lazy to go through the exchange process for a $6 gloss. I don't have a clear gloss anyway so I'll pick up stone and a few other shades at some point in the future.
Formula-wise, these are awesome. They're not sticky at all and feel moisturizing on the lips so I can wear these in place of a balm during the day. As the name suggests, these are supposed to give your lips a more plump appearance and they accomplish that due to the high shine finish. The shimmers are super fine and imperceptible on the lips.
Aesthetically, the Maybelline Lifter Gloss is reminiscent of KWW Beauty due to the muted pink-beige cap and clear acrylic tube. The tube is super chunky and it has some weight to it, which is fine unless you are like me and somehow end up with 10 lip products in your handbag at any given moment. In that case, you probably won't be able to carry around too many shades with you but that seems to be more of a personal issue.
The applicator is slightly oversized but is otherwise a standard doe-foot applicator. I find that one dip picks up enough gloss for one application. Scent-wise, it's hard to put my finger on what this smells like exactly. I've seen people describe these as having a coconut scent which may be true because it reminds me of a sunscreen scent. It's not a bad smell (to me) but it's not my favorite either. It does linger after application but it's not overpoweringly strong. For comparison, the Fenty Gloss Bombs have a much stronger scent. 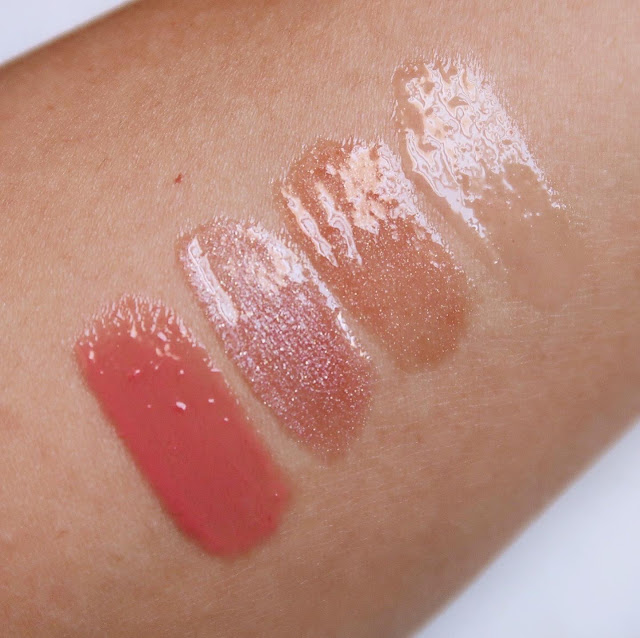 Now onto the swatches! Above are reef, moon, topaz and ice from left to right.
Reef looks a bit darker in the swatch than it does in real life but it's a warm pink cream with a touch of coral. It's a very flattering and easy to wear pink that I think would look nice on many skin tones. You can apply a light layer for a hint of color or get opaque color with an additional dab of gloss.
Moon is a sparkling pink with silver and gold reflects that is absolutely gorgeous. I knew I had to have this shade purely because of the name (I present to you BTS Jin's Moon). This shade is also an almost exact dupe of Fenty's Gloss Bomb in Fu$$y. Moon is a smidge warmer than Fu$$y but they are essentially identical and you wouldn't be able to tell the difference on your lips.
Topaz is sheer caramel with golden shimmer. It's the warmer sister to Moon and gloss that looks great on its own or layered over a lipstick or lipliner.
Ice is the shade I didn't choose but was sent by accident instead of the shade I ordered. In the tube, ice looks like a milky baby pink with an iridescent pink shift but on the lips it looks like a slightly milky clear gloss. I still like the way this looks on and it feels like a balm so no complaints.
The Maybelline Lifter Glosses are one of the best lipglosses I've tried as of late, rivaling ones that cost more than two or three times more. I definitely want to pick up a few more shades at some point though I'm really happy with the shades I have now. I highly recommend these if you're looking for a comfortable, flattering lipgloss.
Labels: lipgloss Maybelline swatch